Why does the NIV translate 2 Thessalonians 2:2 as “the day of the Lord”?

What is the meaning of “the day of Christ” as found in several New Testament passages? Using the KJV, it is specifically referenced in 1 Corinthians 1:8, 5:5, 2 Corinthians 1:14 and 2 Thessalonians 2:2, as well as in other verses.

With regard to 2 Thessalonians 2:2 in particular, the NIV substitutes “the day of Christ” with “the day of the Lord”, which I think is incorrect, but I admit to not being a fan of the NIV. Are these terms interchangeable?

There is a textual variant in 2 Thessalonians 2.2.

The Byzantine text-type follows the variant that says χριστου, 'Christ'. Codex Claromontanus from the Western text-type also contains this variant.

All other manuscript traditions follow the variant that says κυριου, 'Lord'. 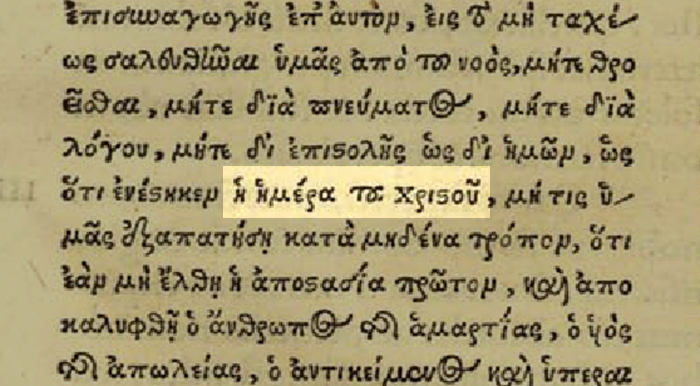 After the KJV's production, there were many developments in biblical scholarship; far too many to describe at any length here. The result, however, was a large shift that cast the reliability of the Byzantine text-type into doubt because its represented a later manuscript tradition. To put it bluntly, earlier manuscripts are generally seen as more reliable. This was encapsulated in the Westcott-Hort text of the New Testament, which largely followed the Alexandrian text-type tradition.

Seen below are two manuscripts from this text-type. 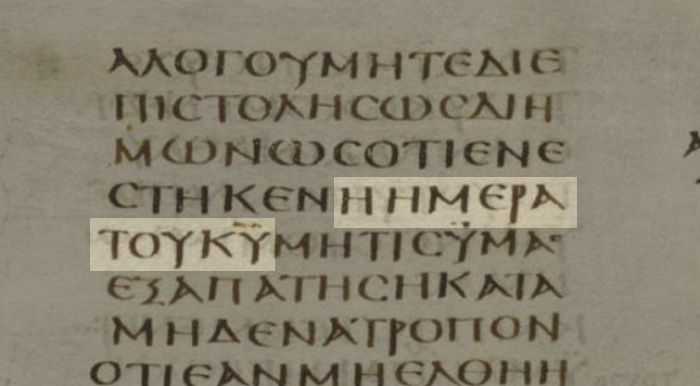 (Scan from The Codex Sinaiticus Project.) 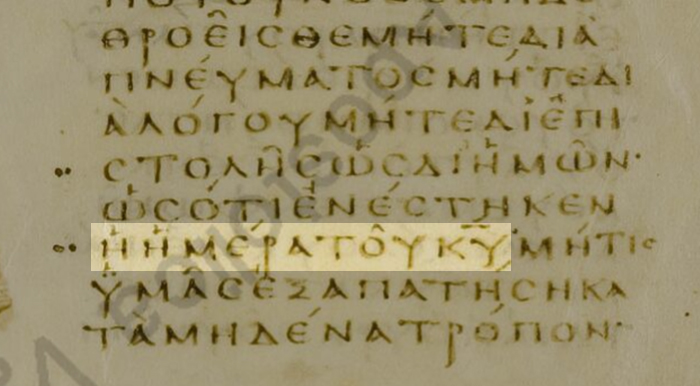 Note that ΚΥΡΙΟΥ (κυριου, 'Lord') is abbreviated as ΚΥ with an overline. This is a nomen sacrum.

By the twentieth century, most English translations were following Westcott-Hort. The NIV is one of them, so it follows the variant that says κυριου, 'Lord'.

ἡ ἡμέρα τοῦ Χριστοῦ - the day of (the) Christ - is found in the majority of Greek manuscripts as well as in one version of the Codex Claromontanus (c. 550).

The NIV editors state that they base their translation on an "eclectic" Greek text, "based on the latest editions of the Nestle-Aland/United Bible Societies Greek New Testament,"1 which in turn opted for the latter reading of the verse over the former.

The King James Version is based on a collection of Greek texts compiled by the Dutch Roman Catholic priest, Desirderius Erasmus, in the 16th century. I don't believe it is known exactly where Erasmus acquired his texts, though they most likely came from sources more or less associated with the Orthodox Patriarchate of Constantinople.

" Behold, the day of the Lord cometh, cruel both with wrath and fierce anger, to lay the land desolate: and he shall destroy the sinners thereof out of it." (KJV)

"For this is the day of the Lord God of hosts, a day of vengeance, that he may avenge him of his adversaries: and the sword shall devour, and it shall be satiate and made drunk with their blood: for the Lord God of hosts hath a sacrifice in the north country by the river Euphrates." (KJV)

"Ye have not gone up into the gaps, neither made up the hedge for the house of Israel to stand in the battle in the day of the Lord." (KJV)

All of these are associated with the anger and wrath of God. Just so, when used again in the NT it spoke of the wrath of God, and the judgment that was coming upon them for crucifying Christ and persecuting His church.

"But the day of the Lord will come as a thief in the night; in the which the heavens shall pass away with a great noise, and the elements shall melt with fervent heat, the earth also and the works that are therein shall be burned up." (KJV)

"Therefore thus saith the Lord God; Because ye are all become dross, behold, therefore I will gather you into the midst of Jerusalem.

20 As they gather silver, and brass, and iron, and lead, and tin, into the midst of the furnace, to blow the fire upon it, to melt it; so will I gather you in mine anger and in my fury, and I will leave you there, and melt you.

21 Yea, I will gather you, and blow upon you in the fire of my wrath, and ye shall be melted in the midst therof.

This was judgment language which we should all be familiar with from the OT, and spoke of the "heavens" that would pass. This was not speaking of the heaven where God sits on His throne as that will never pass away. So, then the "heavens" that would pass were the ruling authorities of the nation or nations under judgment. See Isa. 13:13; 34:4; 51:6; Joel 2:10; 3:16; Hag. 2:6, etc.

The judgment day spoken of throughout the NT was the judgment that was coming upon Jerusalem for their rejection of the Messiah. Paul was comforting the Thessalonians who were asking if Christ had come yet. Read 2 Thess. 2:2-5 carefully,

"That ye be not soon shaken in mind, or be troubled, neither by spirit, nor by word, nor by letter as from us, as that the day of Christ is at hand.

3 Let no man deceive you by any means: for that day shall not come, except there come a falling away first, and that man of sin be revealed, the son of perdition;

4 Who opposeth and exalteth himself above all that is called God, or that is worshipped; so that he as God sitteth in the temple of God, shewing himself that he is God.

5 Remember ye not, that, when I was yet with you, I told you these things?" (KJV)

A day of judgment came upon wicked people after they had been warned of His coming, of His visitation, of His wrath, of His anger. Christ's coming was a day of judgment against the tribes of Israel and they saw it by what had been foretold in Matt. 24, Luke 21, Mark 13... the destruction of that temple.

They were to watch for certain signs that would happen, and one of those was the lawless one, the man of sin. And, as Christ was speaking to His disciples - Jews - the warning was to Israel, and the land under judgment was Judea and the surrounding areas of Palestine. Therefore, the man of sin would have been someone directly involved with deceiving those in Judea and Jerusalem.

The lawlessness of which Paul spoke was already at work while he spoke to them. Therefore it was someone who was already living and was about to be revealed to them. Someone in the first century A.D. was the lawless one.

Many throughout history have associated this man of sin with Nero.

"“And after many plagues completed in the world, in the end he says that a beast ascended from the abyss…that is, of the Romans. Moreover that he was in the kingdom of the Romans, and that he was among the Caesars. The Apostle Paul also bears witness, for he says to the Thessalonians: Let him who now restraineth restrain, until he be taken out of the way; and then shall appear the Wicked One, even he whose coming is after the working of Satan, with signs an lying wonders.’ And that they might know that he should come who then was the prince, he adds: ‘He already endeavours after the secret of mischief’ – that is, the mischief which he is about to do he strives to do secretly; but he is not raised up by his own power, nor by that of his father, but by command of God.” (From Victorinus, Commentary on the Apocalypse, ad 11:7; Ante-Nicene Fathers, p. 354.)

Others believe that the man of sin was one of the Zealots that caused the riots in Jerusalem, possibly John of Gischala:

"This John physically entered the Temple, presented himself to the Zealots as a God-sent ambassador; and persuaded them to defy the laws of Rome and go to war to gain independence. He also instigated the calling in the Idumaeans to keep the Jewish sympathizers from submitting to Rome. He ordered the death of Ananus and the removal of the priesthood. After these atrocities, he became the official leader of the Zealot group m control of theTemple area-john held the temple” and began disregarded the laws of Rome, God, and man, and promising deliverance from the Romans. " From John Noe's post "What About Paul's Man of Sin" here.

The day of Christ, the day of our Lord Jesus Christ, and the day of Jesus Christ throughout the NT was the judgment day that was "at hand" when the books were written in the first century A.D. and was seen - observed - in the destruction of Jerusalem and the temple. The abomination of desolation - that which caused the desolation - was the Roman army whom God used to retaliate against the Jews.

My post "Days of His Visitation" at my blog ShreddingTheVeil

(All bold emphasis is mine.)

Not the answer you're looking for? Browse other questions tagged historical-interpretation new-testament historical-criticism or ask your own question.

10
What does “the assembly of the LORD” refer to?
6
Was John in the Spirit on the “Day of the Lord” or “Sunday” in Revelation 1:10?
8
What was Malachi's meaning in “The sun of righteousness” vs the sun gods of his day?
5
What is the significance of Gen 46:10 “Shaul the son of a Canaanitish woman”?
2
Two words for love in John 21:15–17
1
Does the Codex Sinaiticus contain the Hebrew Tetragrammaton or Greek LORD (KURIOS)?
3
Why did they celebrate again the day after the New Moon in 1 Samuel 20:27?
3
Why do many English translations of Colossians 1:29 not translate the Greek word “KAI”?
5
What does the sentence “their grapes are filled with poison” in Deu 32:32,33 (NIV) mean?