Did Gideon use a different return route in Judges 8?

But the officials of Sukkoth said, “Do you already have the hands of Zebah and Zalmunna in your possession? Why should we give bread to your troops?”

From there he went up to Peniel[a] and made the same request of them, but they answered as the men of Sukkoth had. 9 So he said to the men of Peniel, “When I return in triumph, I will tear down this tower.”

He took the elders of the town and taught the men of Sukkoth a lesson by punishing them with desert thorns and briers.

He also pulled down the tower of Peniel and killed the men of the town.

Did Gideon use a different return route?

He went to the battlefield via the east of Nobah to catch the army by surprise.

Gideon went up by the route of the nomads east of Nobah and Jogbehah and attacked the unsuspecting army.

In contrast, he simply returned through the Pass of Heres; presumably quicker, as Gideon no longer needed the element of surprise or otherwise tactical position.

Gideon son of Joash then returned from the battle by the Pass of Heres.

Probably not. There's a handy map and explanation over on biblestudy.org.

There isn't a way to return from Succoth through Peniel that wouldn't have then had Gideon doubling back (and losing more time/food) to get back to Ophrah. We can't know for sure due to the uncertainty around the location of the 'Pass of Heres' referenced in v13, but the inference of the text seems to be that the Midianites originally took the direct route but Gideon surprised them by taking a longer route and circling back to attack them from the East:

"Gideon went up by the route of the nomads east of Nobah and Jogbehah and attacked the unsuspecting army." Judges 8:11 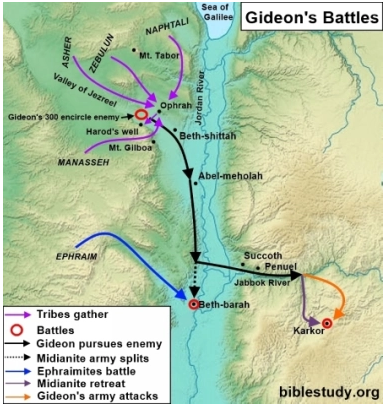 The Midianites would presumably have set lookouts or sentries along the route they had travelled, but would not expect an attack from behind them, and so it was easier for Gideon's small force to approach from this route, surprising the army and causing them to scatter: consider that ~89% of their army had already been destroyed, the rest were likely tired and low on morale/supplies, and those who remained were probably mourning and just wanting to go home at this stage.

It seems likely that the 'Pass of Heres' would simply be the most direct route that the Midianites originally took in the first place, rather than taking a third (less direct) route home after the battle. Note that the men are already recorded as being exhausted much earlier in the account (8:4).

On balance it seems more likely that the army took the most direct route and the events were not recorded chronologically.

Following this sequence, the text seems to jump many days and miles West back to Israel, where the people respond to Gideon's victory:

Judges 8:22 The Israelites said to Gideon, “Rule over us—you, your son and your grandson—because you have saved us from the hand of Midian.”

Again, this doesn't tell us much about where or in which sequence these events happened, and the order doesn't really affect our understanding of the events, but could affect the storytelling. If Gideon punished the Midianites and then punished the Israelite towns, it would feel awkward to skip from Gideon killing an entire Israelite town to being asked to rule all Israel.

So we can't know for sure what Gideon's path was, but the simplest explanation is that they took the easiest route and the consequences were recorded in a different order.

3
Why did 400,000 men of the Tribes of Israel assemble over one rape in Judges 19:20-30 and Judges 20?
3
Where is Karkor?
1
Did Gideon doubt the angelic visitation in judges 6?
2
Did Gideon build two Altars in one night in Judges 6?
6
How did Deborah (or any of the Judges) get their position?
2
Did the Angel leave and return or was it a different event in Judges?
2
Judges 16:19 did Delilah torment Samson?
1
Did the provisions end between Judges 7 and 8?
1
In Judges 19:2, did she get into prostitution?