Grammatically, is 2 Timothy 3:16-17 inclusive or exclusive?

This closely related question has an answer that tries to argue in a theological point of view. However, I would like to discuss this topic from a purely grammatical perspective.

Can this sentence be interpreted as both inclusive or exclusive?

The exclusive version would be:

All Scripture is divinely inspired and profitable ...

The inclusive version would be:

All divinely inspired Scripture is profitable ...

From Ellicot's[sic] commentary: Although this rendering is grammatically possible, the more strictly accurate translation, and the one adopted by nearly all the oldest and most trustworthy versions (the Syriac and the Vulgate), and by a great many of the principal expositors in all ages (for instance, Origen, Theodoret, Grotius, Luther, Meyer, Ellicott, and Alford), runs as follows: “Every scripture inspired by God is also profitable for doctrine, for reproof,” So this verse itself, given that alternate translation may answer your question.

Case for the exclusive interpretation

The "καὶ" connects two adjectives, both in the nominative feminine singular: "θεόπνευστος" and "ὠφέλιμος". Then, it is clear that both adjectives are describing the noun "πᾶσα γραφὴ" simultaneously.

which contradicts the quote above from Ellicott's commentary, as this is clearly the exclusive interpretation.

Case for the inclusive interpretation

This requires interpreting "πᾶσα γραφὴ θεόπνευστος" as the whole subject and "καὶ" as an adverb meaning "also".

Here, "πᾶν δένδρον ἀγαθὸν" is in the construction of "every + [noun] + [good]" as a single noun phrase, just like the first three words of our verse in question.

However, "καὶ" is not an adverb, but a conjunction, which seems to render this interpretation grammatically impossible.

There are other Greek Fathers, though, whom Ellicott does not mention who interpret the verse exclusively:

The above differences, however, are perhaps due more to differences in the manuscripts available to the interpreters rather than differences in how the Greek itself was interpreted. According to the apparatus of The Nestle-Aland Greek-English New Testament (11th ed), the connective is missing in certain Old Latin translations as well as in the Syriac Peshitta. Probably as a consequence of the Old Latin witnesses, the connective is also missing in the older 1592 edition of the Clementine Vulgate. Metzger's Textual Commentary on the Greek New Testament indicates that the connective is also missing in Latin translations of Origen (perhaps the basis for Ellicott's claim), from certain Egyptian (Coptic) translations, as well as from citations of the verse made by Hilary of Poitiers (who was a western Father - as was Tertullian).

The following all support exclusive interpretation:

The case against inclusive interpretation:

Good exegesis always considers the larger context. Previously in 2 Tim. 3:10-15, Paul is telling younger Timothy how to live his life. Then in 3:16-17, Paul gives his authoritative source: all scripture, tells why it's authoritative (all God-breathed), and for what it's all profitable (teaching, reproof, correction, and training one in righteousness).

My conclusion, both from grammar and context, is for what you call the exclusive interpretation:

it is neither of your proposed solutions. First the first word (πας Strong's 3956) is better translated "Every" (in verse 17 most translations translate the same word as "every") as scripture is singular. This is actually a case of non-restrictive versus restrictive adjectival clauses. In this case if they were non-restrictive we would get a really terrible argument that admits the Zoroastrian scriptures (which most Roman citizens in the Near East would have heard about) are inspired by God. That cannot be true so we can be certain that these are restrictive clauses so:

16 Every, inspired and useful for instruction, for substantiation, for correction, for discipline in righteousness, scripture 17 [is] so God's own man may be ready, outfitted for every good work

a nominal modifier is non-restrictive if and only if two conditions hold: (i) that the speaker believes that the modified noun phrase has the same denotation as the unmodified noun; and (ii) that the modifier can be used to deduce an implication that is discourse-related in a particular way to some salient proposition in the sentence or discourse[The semantics of modification: Adjectives, nouns, and order][1]

16All scripture is God-breathed, and profitable for teaching, for reproof, for correction, for training one in righteousness, 17that he should be whole, the man of God, a man thoroughly prepared, fit for any good work. 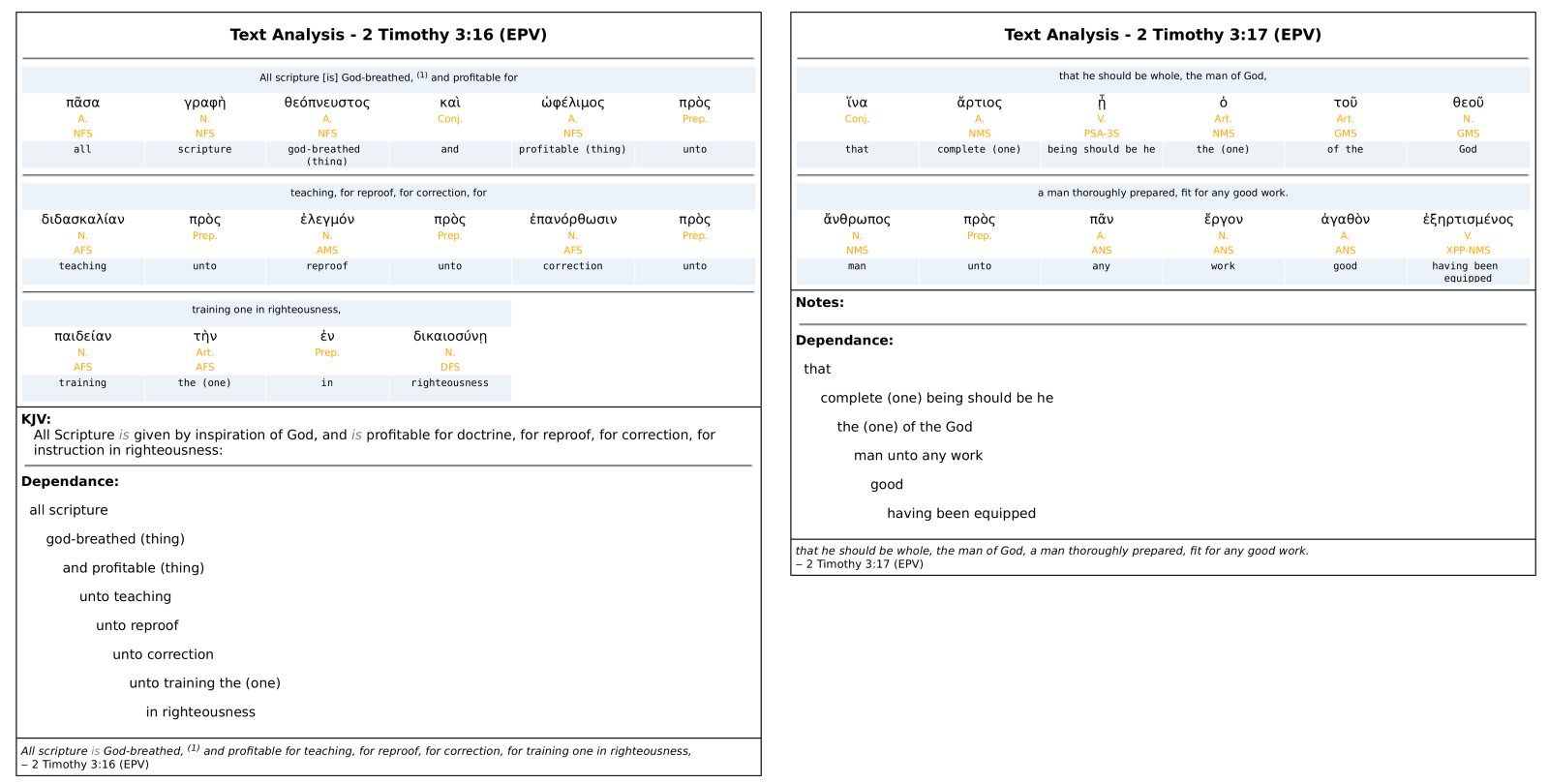 In regard to Matthew 7:17, I would translate it this way: 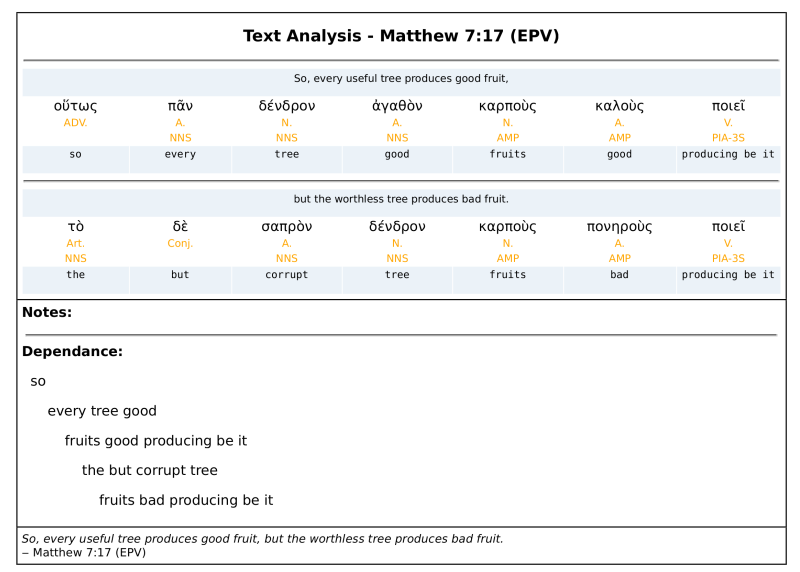 Here we have precisely what we don't have in 2 Timothy 3:16, a comparison between things. It's okay in this context to swing the adjective ἀγαθὸν (good) around in front of the noun δένδρον (tree) to make the English phrase "Every good tree", because the purpose of the adjective is to distinguish this type of tree from the other type in the context. It is not okay to do this in 2 Timothy 3:16-17, because the context is not about comparison, but about declaring a property of "All scripture", that it is a God-breathed thing.

I think Mark_K made some compelling points and to my mind could qualify as the answer. However, I would like to add some stuff...

The verse in question is not an "island". No verse is an island. There is a context. And the context of the previous verse, in my mind, establishes what Paul is referring to when he says "all scripture":

NIV 2 Timothy 3:15 and how from infancy you have known the Holy Scriptures, which are able to make you wise for salvation through faith in Christ Jesus.

Paul is speaking specifically of the scriptures that Timothy grew up with which would almost certainly be a version of the LXX. These are "sacred writings", not just any old writings and in the context of his education by his Jewish messianic parents:

NIV 2 Timothy 1: 3I thank God, whom I serve, as my ancestors did, with a clear conscience, as night and day I constantly remember you in my prayers. 4Recalling your tears, I long to see you, so that I may be filled with joy. 5I am reminded of your sincere faith, which first lived in your grandmother Lois and in your mother Eunice and, I am persuaded, now lives in you also.

That Paul may have been including the writings of the apostles is possible:

14But as for you, continue in what you have learned and have become convinced of, because you know those from whom you learned it, 15and how from infancy (βρέφους) you have known the Holy Scriptures (ἱερὰ γράμματα), which are able to make you wise for salvation through faith in Christ Jesus. 16All Scripture is God-breathed and is useful for teaching, rebuking, correcting and training in righteousness, 17so that the servant of God a may be thoroughly equipped for every good work.

In that passage Paul refers to "ἱερὰ γράμματα" which is NOT the usual name for the scriptures ("writings") but instead could be understood to read "sacred literature" which leads me to suspect he wants to include his own writings and that of the apostles. He also says "knowing from whom you learned it" which may refer to the apostles themselves, particularly of course himself.

But in no way is he endorsing writings outside of the Jewish world.

Not the answer you're looking for? Browse other questions tagged greek grammar 2-timothy or ask your own question.

6
Is 2 Timothy 3:16-7 intended to be inclusive or exclusive?
2
In 2 Tim. 3:16, what is the meaning of the phrase "for correction"?
13
Should Matthew 28:17b be understood in a "partitive" or "inclusive" sense?
5
2 Corinthians - how do you tell where the first-person plural (we) is inclusive or exclusive?
2
In 2 Timothy 2:6, does the farmer work first or partake first?
2
Grammatically speaking, Who is the 'father' of 1 Corinthians 4, etal?
3
Is Jeremiah 18:2 grammatically incorrect?
1
Is it grammatically possible to translate σαββάτω as Sunday or week?
2
Is this translation of John 19:32–34 grammatically possible?
4
What is the Greek Connotation of "shew thyself" in 2 Timothy 2:15?