23 Therefore Michal the daughter of Saul had no child unto the day of her death.

7 But the king spared Mephibosheth, the son of Jonathan the son of Saul, because of the LORD'S oath that was between them, between David and Jonathan the son of Saul. 8 But the king took the two sons of Rizpah the daughter of Aiah, whom she bare unto Saul, Armoni and Mephibosheth; and the five sons of Michal the daughter of Saul, whom she brought up for Adriel the son of Barzillai the Meholathite: 9 And he delivered them into the hands of the Gibeonites, and they hanged them in the hill before the LORD: and they fell all seven together, and were put to death in the days of harvest, in the first days, in the beginning of barley harvest.

It would seem in 2 samuel 6 Michal the the daughter of King Saul died without conceiving but later the same Michal is mentioned as having five sons,or is that Saul had another daughter named Michal as well?

As a commenter notes, there is a text-critical issue here.

The Masoretic Text of the Hebrew Bible plainly reads "Michal" at this point. However, as the textual notes to the Biblia Hebraica Stuttargtensia indicate, there are two Hebrew manuscripts that read "Merob", and there is some support for this among Septuagint manuscripts, too: 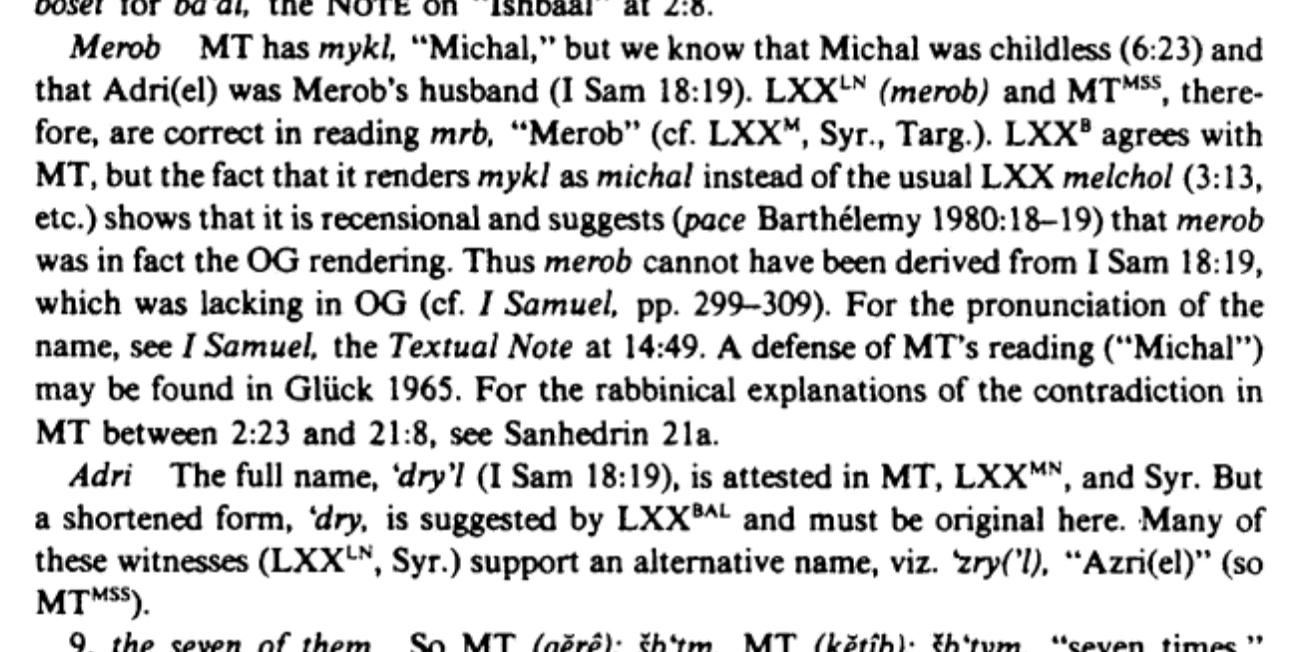 For this reason, almost all modern versions read "Merab" here, in light of 1 Sam 18:19, as well as the tradition of Michal's childessness. There are dissenting voices: see, e.g., J. J. Glück, "Merab or Michal", Zeitschrift für die Alttestamentliche Wissenschaft 77/1 (1965), 72–81, who argues for the retention of Michal.

This is where the vast majority of modern scholars, translators, and commentators are content to leave it: that 2 Sam 21:8 contains a "slip" (S.R. Driver calls it a "lapsus calami") confusing the names of Michal and Merab which is then corrected.

The KJV's "whom she brought up for Adriel" may itself represent an attempt to deal with the perceived problem, since that is a dodgy translation, to put it bluntly. The Hebrew here, אֲשֶׁ֥ר יָלְדָ֛ה לְעַדְרִיאֵ֥ל, plainly means "whom she had borne to Adriel" (cf. BDB sub ילד). Older commentators spotted the problem, but got round it -- in the case of both Rashi and Matthew Henry, from very different times and traditions -- by supposing that although the five sons must have been born to Merab, they were raised by her sister, the childless Michal, thus following the same line of reasoning which gives rise to the KJV's mistranslation.

While 2 Samuel 21:8 in the KJV has Michal, you referenced correctly that Michal "had no child unto the day of her death" (2 Samuel 6:23). Given that Saul was also father of Merab, it's likely to have been Merab (1 Samuel 18:19), the wife of Adriel. In other words, this was probably a transcriber error.

The NASB, for example, writes Merab

and the NIV as well

After David danced with all his might, Michal spoke to him concerning his passionate zeal for the Lord and the testimony of the Lord. And David answered her, making it clear that he did not receive her attitude.

From that time unto she died, Michal had no child. But it is not said she was barren. She just had no child. David and she never had a child.

Instead, she brought up five on behalf of Adriel. Scripture does not state why she did so, only that she did so.

That is all we know.

Except we know that the King, not named by his personal name, for he did it in the capacity of his appointed office, took them and delivered them to the Gibeonites, who hanged them and they were put to death.

This is the explanation given by the Apologetics Press :

Before believing that the inspired writer got “mixed up,” consider the following:

Michal’s sister, Merab, married Adriel the Meholathite (1 Samuel 18:19), and it was Adriel’s children that, according to 2 Samuel 21:8, belonged to Michal and were “brought up” by Michal.

I would agree certainly that Michal 'brought up' the children, because that is what is stated in the Masoretic text, however precisely who bore the children is the question here, given that by no means was 'Merab' the only potential candidate, given the possibility of concubines that Adriel may have had. Since otherwise Michal would have had roughly only eight years to beget five children by an assumed adultery with Adriel(that is, the amount of time since David was betrothed to her[1Sa 18:27] + the amount of time David was with the Philistines[1 year - 1Sa 27:7] + the amount of time he was in Hebron[7 years], at which time he took her back[2Sa 3:13,6:23]), it seems most likely that, in answer to going childless, she bore them for Adriel, her sister's husband, 'on her knees' as it were, probably by way of one of his concubines(in likeness of the jealousies between Leah and Rachel, bearing children by concubines in order that they might be the more respected, also Gen. 16:2,30:3).

On another note, the Bishops' 1568 comment on 2 Samuel 21:8's Michal's five children, "That is, whom she(having no children of her owne) brought up, being the children of Adriel, by Merab her sister", shows that the idea of Michal as a surrogate mother was by no means exclusive to the KJV 1611.

Here is one possibility. It was a scribe error. "Michal" should be "Merab".

The text has Michal instead of Merab; but this must be an error of the scribe, since it was Merab, not Michal, who was married to "Adriel the Meholathite" (1Samuel 18:19), and Michal was childless (2Samuel 6:23). The English phrase "brought up for" is taken from the Chaldee; the Hebrew, as noted in the margin, is bare to.

Another possibility assumes that there was no scribe error. Merab died and Michal became the foster mother of her 5 sons.

Verse 8. - Michal. It was Merab who became the wife of Adriel the Meholathite (1 Samuel 18:19). Michal was childless (see 2 Samuel 6:23). Whom she brought up for. This is one of the many cases of untrustworthiness in the renderings of the Authorized Version. We have noticed a very flagrant instance before in 2 Samuel 5:21. The object of these mistranslations is always the same, namely, to remove some verbal discrepancy in the Hebrew text. The Hebrew says here "five sons of Michal, whom she bare to Adriel;" but Michal never bore a child, therefore something must be substituted which will save the Hebrew from this verbal inaccuracy, and Michal must be represented as having taken Merab's place (perhaps at her death), and been foster mother to her children. This explanation is, it is true, taken from the Jewish Targum; but the Targum never professes to be an exact translation, and constantly perverts the meaning of the plainest passages for preconceived reasons.

Tony ChanTony Chan
14.8k22 gold badges55 silver badges4343 bronze badges
add a comment  |
-1
Want to improve this post? Provide detailed answers to this question, including citations and an explanation of why your answer is correct. Answers without enough detail may be edited or deleted.

She was not the maternal mother. She raised them for Adriel. I thought this was a no brainer. Bishops Bible supports the KJV. It's no surprise to me.

Not the answer you're looking for? Browse other questions tagged contradiction textual-criticism kjv 2-samuel or ask your own question.

5
Michal childless or have 5 sons?

6
Is Michal's childlessness a consequence of her criticism to David's dance (2 Samuel 6:23)?
5
In light of Deuteronomy 21 & 24, was the hanging of Saul's descendants in 2 Samuel 21 a violation of the law?
2
Did rizpah watch the hanged bodies for five months in 2 Samuel 21?
3
Did David not break his oath when he handed Saul's descendants to the Gibeonites in 2 Samuel 21?
4
Why did they celebrate again the day after the New Moon in 1 Samuel 20:27?
2
In 2 Samuel 21:8-10 was Rizpah’s use of the sackcloth a sign that the land had repented of its sin?
4
In the LXX version of 2 Samuel 1:18, where did the bow go?