What is a "Pre-Christian" understanding of the Abomination of Desolation?

"When ye therefore shall see the abomination of desolation, spoken of by Daniel the prophet, stand in the holy place, (in the Mark account, it says "where it ought not",

Jesus is not only referring to a specific term, "Abomination of Desolation", but also to a specific understanding which His disciples would have gained from the rabbis who taught on the prophecies of Daniel. This term," שִׁקּוּצִים֙ מְשֹׁמֵ֔ם" is used in various forms in Dan. 8:13, 9:27, 11:31, 12:11.

My question is: how would a pre-Christian era Jewish person have understood the meaning of this term? In your answer you can also include what changes in the meaning of the term to what it represents today, using the various Midrash and Mishnah sources.

The Jewish (and pre-Christian) understanding of the abomination of desolation was the desecration of the Jewish temple reconstructed by Zerubbabel. The abomination of desolation (or, with more literalness: the abomination of what precipitates the vacating [of holiness]) had the primary Jewish understanding through Antiochus IV Epiphanes, who had desecrated the Jewish Temple through idolatry in 168 BCE. The secondary meaning had to do with the desecration of idolatry at Sinai, when the Jewish people substituted the place of Yahweh with the golden calf. That is, both of these desecrating events through idolatry had occurred on the same date in Jewish history.

Tractate Ta‘anit of the Babylonian Talmud deals with the general areas of repentance and penitence relating to divine discipline with an emphasis on fasting. In this tractate there appears several unfortunate events in the history of the Jewish peoples which have immediate relevance to the discussion at hand. For example, the several verses in Daniel regarding the "abomination of desolation" appear to correlate with the same date in Jewish history when Moses destroyed the tablets upon seeing the golden calf of idolatry. That is, this very same date in Jewish history was the public burning of the Torah by Antiochus IV Epiphanes, who then desecrated the Temple with profane sacrifices and the great image of idolatry. The following citation is the relevant portion taken from the English translation of the Babylonian Talmud by Jacob Neusner (2011), Tractate Ta'anite 4:1, XIII-XVII [Folio 28B and Folio 29A] - please click the image to enlarge. 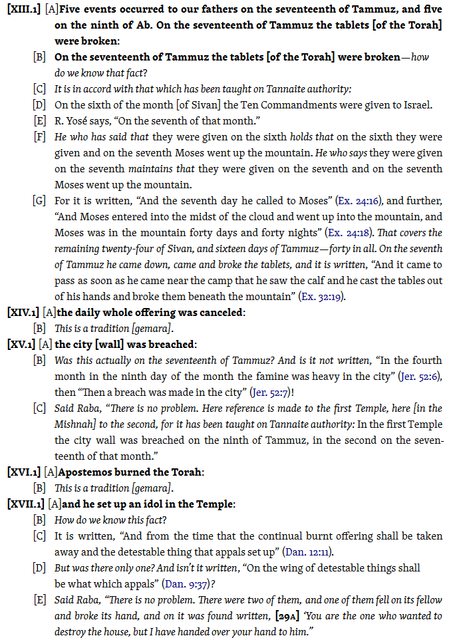 The mention here of "Apostomus" appears to be Antiochus IV Epiphanes. That is, the abomination included both the desecration of the Torah and Temple, in which Antiochus IV Epiphanes erected the infamous idol. These observations in the Gemarah of the Talmud comprise the first line commentary on the Mishnah (which is the core of the Talmud), and therefore carry gravitas on the Jewish (and pre-Christian) understanding of the meaning of "abomination of desolation."

The abomination of desolation (or, in colloquial contemporary English, the abomination which wipes out what is holy) appears to relate to idolatry, which displaces Yahweh as the object of divine worship. That is, Jewish oral tradition (as found in the Babylonian Talmud) correlates the date of the desecration of the Zerubbabel's Temple through idolatry by Antiochus IV Epiphanes in 168 BCE with the date that the Exodus generation had substituted the worship of Yahweh with the golden calf of idolatry.

Here's an idea that came to me a while ago and perhaps could help: Some translations of Leviticus 20:13 qualify that act as "abomination." So, there's one of the words involved (at least according to some translations).

As for that which "causes desolation:" Perhaps it is also connected to the lifestyle based on those acts (this last part is my personal view).

Not the answer you're looking for? Browse other questions tagged daniel midrash or ask your own question.

13
What is "Midrash" and how does it relate to Christian principles of hermeneutics?
7
What do the toes represent in the final kingdom of Nebuchadnezzar’s Dream in Daniel 2?
9
What is the rock that dashes the feet of the fourth kingdom in Nebuchadnezzar’s Dream in Daniel 2?
0
When and what is the 'time of distress' in Daniel 12:12
4
What does "closed and sealed" mean in the language it was written in?
4
Daniel 10:21 > What is the Book of Truth?
4
What were the Chaldeans?
3
What is "the end" in Daniel 8:19?
3
What did Nebuchadnezzar mean by "son of the gods"?
2
What is the significance that time is mentioned as singular, plural, and fractional forms in Daniel 7:25?