What do the toes represent in the final kingdom of Nebuchadnezzar’s Dream in Daniel 2?

Assuming the Legs and feet are the Roman Empire, what are we to make of its 'ten toes' that are half clay and half iron? I assume that something 'within' or absorbed by the developing Empire can be grouped into 'ten' and that it will make/made it less united and strong as a result. What is this unstable structure of the Roman Empire represented by 'ten toes' that is easily dashed by the magical little rock which moves by itself and eventually grows into a mountain?

Note: I am assuming a traditional Roman view of Daniel's fourth Empire in contrast to many critical expositors who promote the Grecian view.

There are two grammatical chiasms in the Book of Daniel: one in Aramaic and one in Hebrew. (Please click here for more information.) If these chiasms are in literary parallel, then the toes are the ten horns found in three verses in Daniel Chapter 7. If consideration includes the Christian New Testament, then the ten horns align with ten mountains, or kingdoms found in the Book of Revelation. The iron mixed with clay therefore may suggest that these are pluralistic governments, which diffuse their economic, political, and military power in order to preclude any one nation or party from gaining undue control.

If these chiasms are deliberate by authorial intent, then the contents of Chapter 2 would stand in parallel with Chapter 7. Thus the toes align to the ten horns, which represent 10 kingdoms.

Daniel 7:7 (NASB)
27 After this I kept looking in the night visions, and behold, a fourth beast, dreadful and terrifying and extremely strong; and it had large iron teeth. It devoured and crushed and trampled down the remainder with its feet; and it was different from all the beasts that were before it, and it had ten horns.

This "kingdom" of ten horns be aligned with the toes, but will be weak in the sense of its pluralistic form of government as the following graph depicts: 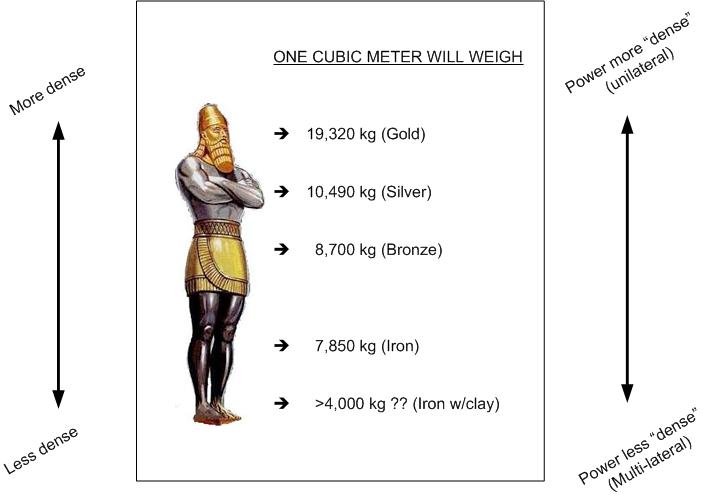 Please note that the image is "top heavy" and therefore very unstable. This instability is not political, but temporal. In other words, the multi-lateral (pluralistic) forms of government are not weaker in any political or military sense --in fact, this beast of ten nations will be more fierce than everything preceding-- but in the temporal sense. That is, when these ten kingdoms appear, then at that time the whole system of human government will collapse. That is, the "stone cut without hands" will strike the feet and toes (Dan 2:34) with the result that the entire image will implode (Dan 2:35).

The toes in Daniel Chapter 2 appear to stand in direct literary contrast by chiasm with the ten horns in Daniel Chapter 7. That is, the ten horns are the ten kingdoms, which are ten(?) toes. If so, then these toes are ten governments that are pluralistic, which means that the powers of government are diffused. In the Christian New Testament, the ten horns appear in the Book of Revelation mounted on heads. In Rev 12:3, the heads wear the crowns (control of government) but later the horns are wearing the crowns (Rev 13:1), which suggests that the locus of control of these governments shifted from deliberative / restrained (image of the head) to impulsive / militaristic (image of the horn). Thus the inherent weakness of iron mixed with clay (image of Nebuchadnezzar's statue) later appears in Daniel Chapter 7 and the Book of Revelation as the beast with ten horns wearing ten crowns.

Short Answer: The toes ("ten" is not specified) are treated as synonymous with the feet, which are mentioned in relation to the legs of iron. ("Toes" are not even mentioned in the recounting of the dream itself.) The significance is that they were part iron and part clay, which signified division within the kingdom, part of it being as strong as iron, and part as brittle as common clay. This division would characterize the fourth kingdom.

Since this is a hermeneutics site, let's walk through the text of Daniel 2:40-43 and do some exegesis. Regarding the "iron legs" we first read the following:

Then there will be a fourth kingdom as strong as iron; inasmuch as iron crushes and shatters all things, so, like iron that breaks in pieces, it will crush and break all these in pieces.

This is the first sentence in the paragraph that describes the "iron legs." We learn here that (A) we are looking at a fourth kingdom, (B) it will destroy the previous three kingdoms, and (C) that the iron signifies destructive power. The paragraph continues...

There are several very important things to note here:

Rome? Perhaps. I'm thinking of the strength of their military and the weakness of their senate? I'll save the specific speculations for another day, or another interpreter, but hopefully this exegesis will be a helpful first-step in the right direction.

The ten toes is manifested in the Group of Ten economic group that represents every powerful Western Nation who are the military, economic, social inheritors of the Roman Empire. These nations are separate and throughout history, often fought each other. Their unity is weak and fragmented, and they can never unite in the same way as the old Roman Empire was. https://en.wikipedia.org/wiki/Group_of_Ten_(economic)

For this reason, I believe the ten toes most represent the Modern Western Nations which include Belgium, Canada, France, Germany, Italy, Japan, Netherlands, Sweden, Switzerland, United Kingdom and the United States.

Most of these countries reside on the former territory of the Roman Empire.

The iron mixed with clay is perhaps to be understood as referencing to people involvement in rule (i.e. republic and democracy) in the Roman Empire and successive (and associated) states after. Napoleon, Dschugaschwili (Stalin), Mussolini, Hitler - these all came up under some sort of people rule (clay) which then was turned into totalitarian rule (iron).

Interestingly the Kaisers of the so-called Holy Roman Empire (of German Nation), the French Cèsares, the Russian Czars named themselves after the first Roman dictator.

Not the answer you're looking for? Browse other questions tagged daniel or ask your own question.

2
The book of Daniel

6
What did "Kingdom of Greece" refer to in Daniel 8:21?
6
Which four kingdoms are represented in the statue of Nebuchadnezzar's dream in Daniel Chapter 2?
10
What is the rock that dashes the feet of the fourth kingdom in Nebuchadnezzar’s Dream in Daniel 2?
2
The book of Daniel
3
What is Daniel mourning about in Daniel 10:2?
4
What do the Two Mountains Represent in Daniel 2:35 & 45?
3
What do the three "plucked horns" of Daniel 7:8 represent?
3
Why did Belshazzar, King of Babylon name Daniel as the third ruler of his kingdom?
2
Did Daniel receive (worship) what God reserves only for Himself? Daniel 2:46