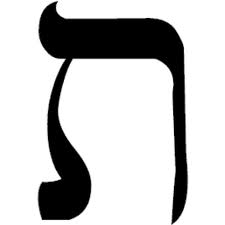 The last letter of the Hebrew alphabet is called Tau, and it has the power of the Roman T. In its present form n, in the square character now in use, it has no resemblance to a cross; but in the ancient Hebrew alphabet, its figure X, or +, was that of a cross. Hence, when it is said, in the vision of Ezekiel (ix, 4) "Go through the midst of the city, and set a mark (in the original"n, tau) upon the foreheads of the men that sigh and that cry for all the abominations that be done in the midst thereof"- which mark was to distinguish them as persons to be saved, on account of their sorrow for sin, from those who, as idolaters, were to be slain-the evident allusion is to a cross. The form of this cross was X or +, a form familiar to the people of that day.

It is significant to me in that it not only corresponds to the 1st letter of my name, but it corresponds to the One Who Saves us(The Aleph and the Tav) and His Work in redemption; which became real for me in Mar. 29, 1976 and has been real since.