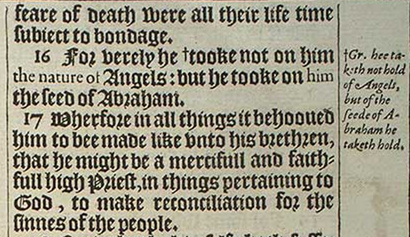 Notice how the font of "the nature of" (as well as "him") is different from the rest of the verse, indicating that those words were not actually translated from the Greek text. Words in such a font were added to help the reader, but sometimes they introduce a translator's own bias. (In fact, we should also take note of the KJV's marginal note.)

That being said, is there any other translation possible from the Greek text beside that which the KJV translators produced? (By the looks of it, it seems the matter in question is how to translate the verb ἐπιλαμβάνομαι with a direct object in the genitive.)

Provided below is the Greek text of the Textus Receptus (Estienne, 1550):

About Another Possible Translation

Your second question is:

Is there any other translation possible from the Greek text beside that which the KJV translators produced?

The clear answer to that has to be "yes," since many other translations do it:

ESV: For surely it is not angels that he helps, but he helps the offspring of Abraham.

NASB: For assuredly He does not give help to angels, but He gives help to the descendant of Abraham.

NIV: For surely it is not angels he helps, but Abraham’s descendants.

NKJV: For indeed He does not give aid to angels, but He does give aid to the seed of Abraham.

The more recent translations given above are using the #5 definition of ἐπιλαμβάνομαι from BDAG:

This fifth definition seems rare (and even Mk 14:72 noted appears questionable to me). It is extending the basic idea of the verb, which is to "take hold of, grasp, catch" and extending it to an idea of doing so for the concern or benefit (help) of another.2 These same ideas are what another resource mentions.3

However, the other four definitions in BDAG of ἐπιλαμβάνομαι carry an idea of grasping that takes something to oneself, which seems lost in this 5th definition.

A Closer Look at the Word ἐπιλαμβάνομαι Itself

The word is a compound of the preposition ἐπί and a middle/passive form of the verb λαμβάνω ("to take, take hold of" ... "acquire" ... "receive").4 The preposition can carry with a genitive object (as the case of the direct object of ἐπιλαμβάνομαι is) the idea of "concerning,"5 but the essence of its use with the genitive is far more often related to positioning (spacial or temporal), nearness, and the reaching of a goal.6 This idea of positioning seems much more intrinsic to the idea of taking possession, and thus relating more to the first four definitions of ἐπιλαμβάνομαι.

In short, it seems forced to apply the #5 definition from BDAG to this verse, especially when it seems this verse is largely used to support that definition itself. If so, then the more recent translations appear to be forcing the idea toward "help" or "aid," without as strong of a support behind it as the KJV translation has.

About the KJV Translation

Wallace makes a statement about the basic nature of the genitive case that seems relevant here. He says in explaining differences between accusative and genitive ideas, both of which are "expressing some kind of limitation":

This does not resolve between the more recent translations and the KJV, as the recent ones are taking v.16 in a way that leans toward isolating quality of who is aided (Abraham's kind verses angelic kind), while the KJV is emphasizing quality of the nature that Christ took on.

But it does seem from the context that the KJV idea is better supported. Consider even a modern translation of the surrounding context (Heb 2:14-18, ESV), where I have emphasized aspects that seem to point toward the KJV translation:

14 Since therefore the children share in flesh and blood, he himself likewise partook of the same things, that through death he might destroy the one who has the power of death, that is, the devil, 15 and deliver all those who through fear of death were subject to lifelong slavery. 16 For surely it is not angels that he helps, but he helps the offspring of Abraham. 17 Therefore he had to be made like his brothers in every respect, so that he might become a merciful and faithful high priest in the service of God, to make propitiation for the sins of the people. 18 For because he himself has suffered when tempted, he is able to help those who are being tempted.

The whole context is focused upon this identifying of Christ with the nature of mankind. This leans heavily in favor of the KJV rendering.

Additionally, Wallace notes of the genitive as a direct object that:

The predominant uses can be grouped into four types of verbs: sensation, emotion/volition, sharing, ruling.8

The verb ἐπιλαμβάνομαι could be classified in either the "sharing" or "ruling" category, depending on the nature of "taking hold of" (i.e. is one taking hold of to share in or to control). However, the idea of "concern" is not reflected in either very well (though is not totally absent; obviously, one concerned for another is in some sense "sharing" in their plight, and one "ruling" ought to be concerned for the ones controlled). The ruling idea is ruled out by the context, as the whole idea is from the context is clearly one of "sharing" with humanity's plight.

But sharing clearly has more relation to having like "nature" than mere "concern" or "aid" or "help." This leans heavily in favor of the KJV rendering.

Further, uses of the genitive include many ideas that are related to the concept of taking on the nature of: genitives of possession, relationship, material, destination, product, place, and association.9 Not that any one of these is precise, but they are show that the genitive idea relates at a fundamental level in various ways to the idea of what something is composed of and what something is related to, both of which taking on the "nature of" relate directly to. This leans in favor of the KJV rendering.

Conclusion: Is the translation of the KJV accurate?

To answer your main question, evidence to me suggests that the KJV rendering is more accurate in conveying the idea intended for v.16 than the more recent translations. However, it is not the "only" possible translation.

7 Daniel B. Wallace, Greek Grammar Beyond the Basics - Exegetical Syntax of the New Testament (Zondervan Publishing House and Galaxie Software, 1999), 76.

9 Wallace, see the various discussions of these on pages 78-129.