How would the Jewish people understand Abraham's bosom and the bosom of The Father?

And it came about that the poor man died and he was carried-away by the angels to the bosom (κόλπον) of Abraham. And the rich man also died and was buried. (Luke 16:23 DLNT)

Would the Jewish people understand Abraham's bosom to mean Paradise after death?

If so, what point does John intend a Jewish reader to understand when he writes:

No one has ever seen God; the only-born God, the One being in the bosom (κόλπον) of the Father — that One expounded Him. (John 1:18 DLNT)

The expression "bosom of Abraham", חיק אברהם, is post OT, and appears once in rabbinic literature, in the Babylonian tractate Kiddushin (marriages) page 72b, first line. My translation is:

The day that [Rabbi Ada bar Ahava] sat in the bosom of Abraham, Rabbi Yehuda was born in Babylon.

Here the phrase is a euphemism for "died", nothing more.

This is the first sentence in a breita that lists pairs of great Rabbis, one of who dies on the day that the other was born. The last line of the breita is:

... which shows that a righteous man does not leave this world until another man, destined to be as righteous as he, is created.

For if we so die, Abraham and Isaac and Jacob will welcome us, and all the fathers will praise us.

This usage shows the Jewish folk belief that the righteous are welcomed in the afterlife by the Fathers of the nation. This theme is common in the Midrashic literature but it was never the basis of Jewish doctrine. In fact, the concepts of the afterlife, העולם הבא, the messianic times, ימות המשיח, and the Garden of Eden, גן עדן, were never and aren't now clearly defined in Jewish doctrine, and are commonly conflated in various ways. Some, but not all versions of the "El malei rahamim" prayer said today at funerals and remembrance events includes the words "... may [he/her/they] rest in the Garden of Eden".

These ideas commonly have little importance in Jewish life. They are held in reserve and are revived in Jewish circles in dire times, such as the times of the Maccabbeean revolt, and the great revolts of the first and second centuries.

Note that the word commonly translated as "bosom", a kind of funky English word that can also refer to a woman's chest in English but not in Hebrew, is חיק in Hebrew, which might better be translated into English nowadays as "embrace". It is used in Hebrew to indicate closeness, membership in an intimate circle or group, or acceptance.

I speculate that the phrase "bosom of Abraham" fell out of use in Jewish circles because of it's adoption in Christian circles. It does not appear in later Jewish literature or liturgy. There is a gloss on the expression in the Jewish Encyclopedia.

So, to answer your question, my understanding of John 1:18 is that the intent of the verse is intended to contrast with the phrase "bosom of Abraham" (into which many people are accepted), to the "bosom of the Father", into which only Jesus was accepted, and therefore only Jesus has seen God, as opposed to Moses, who saw only the back side of God from the niche in the rock on mount Sinai (Exodus 33:22).

The scene of the bosom of Abraham and the bosom of the Father is a domestic scene, at table. Instead of sitting in chairs around table the men would recline (lay back, propped up on an elbow for example) in an arrangement of 3 couches called a triclinium as pictured below: 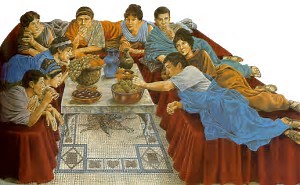 Apparently John was wont to recline so that his head rested on Jesus' chest: 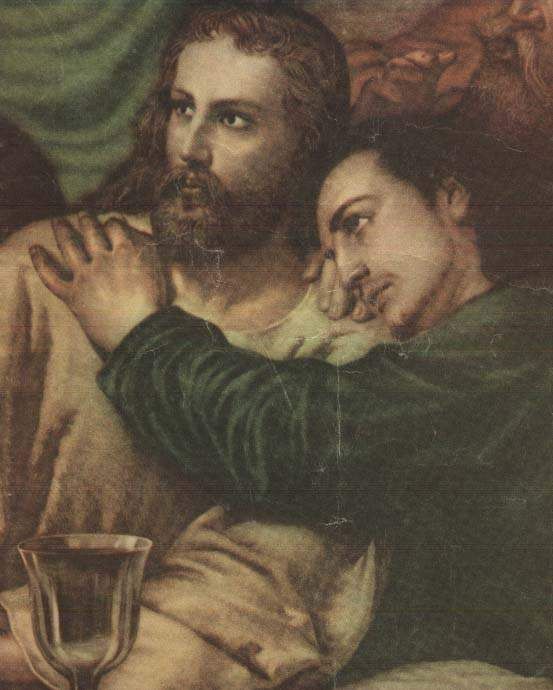 In this same way Jesus reclines at dinner with Father and leans his own head on the Father's chest. This is very intimate, familial conduct.

King James Bible John 13: Now there was leaning on Jesus' bosom one of his disciples, whom Jesus loved.

Young's Literal Translation John 21:20 And Peter having turned about doth see the disciple whom Jesus was loving following, (who also reclined in the supper on his breast, and said, 'Sir, who is he who is delivering thee up?')

That in the fable Lazarus was in such intimacy with Abraham was the ultimate contrast to the utter rejection of the rich man.

NIV Matthew 8: 10When Jesus heard this, he was amazed and said to those following him, “Truly I tell you, I have not found anyone in Israel with such great faith. 11I say to you that many will come from the east and the west, and will take their places at the feast with Abraham, Isaac and Jacob in the kingdom of heaven. 12But the subjects of the kingdom will be thrown outside, into the darkness, where there will be weeping and gnashing of teeth.”

Personally I don't see any reason to draw any Christian doctrines from this fable and regard it merely a fable with a punchline, akin to the very common "St. Peter at the Pearly Gates" joke genre:

It got crowded in heaven, so, for one day it was decided only to accept people who had really had a bad day on the day they died. St. Peter was standing at the pearly gates and said to the first man, "Tell me about the day you died."

The man said, "Oh, it was awful. I was sure my wife was having an affair, so I came home early to catch her with him. I searched all over the apartment but couldn't find him anywhere. So I went out onto the balcony, we live on the 25th floor, and found this man hanging over the edge by his fingertips. I went inside, got a hammer, and started hitting his hands. He fell, but landed in some bushes. So, I got the refrigerator and pushed it over the balcony and it crushed him. The strain of the act gave me a heart attack, and I died."

St. Peter couldn't deny that this was a pretty bad day, and since it was a crime of passion, he let the man in.

He then asked the next man in line about the day he died. "Well, sir, it was awful," said the second man. "I was doing aerobics on the balcony of my 26th floor apartment when I twisted my ankle and slipped over the edge. I managed to grab the balcony of the apartment below, but some maniac came out and started pounding on my fingers with a hammer. Luckily I landed in some bushes. But, then the guy dropped a refrigerator on me!"

St. Peter chuckled, let him into heaven and decided he could really start to enjoy this job.

"Tell me about the day you died?", he said to the third man in line.

"OK, picture this, I'm naked, hiding inside a refrigerator ..." http://jokes4all.net/st-peter-jokes

Not the answer you're looking for? Browse other questions tagged john luke or ask your own question.