Jesus is called "the Son of the Most High (God)" (definite article the), as if it were a title that belongs exclusively to him:

30 And the angel said to her, “Do not be afraid, Mary, for you have found favor with God. 31 And behold, you will conceive in your womb and bear a son, and you shall call his name Jesus. 32 He will be great and will be called the Son of the Most High. And the Lord God will give to him the throne of his father David, 33 and he will reign over the house of Jacob forever, and of his kingdom there will be no end.” [Luke 1:30-33, ESV]

However, in Psalm 82 the title is applied to multiple individuals (who by the way are regarded as gods):

The Bible is clear. Jesus is the one an only, unique Son of God. This is confirmed at John 3:16, "For God so loved the world that He gave His "only' begotten Son, that whoever believes in Him should not perish, but have eternal life."

And 1 John 4:9, "By this the love of God was manifested in us, that God has sent His "only" begotten Son into the world so that we might live through Him."

That would mean by definition, that God did not beget Satan and everyone in human history as His "sons." Moreover, while the Bible does speak of Christians as the children (or "sons") of God, this relationship is clearly and repeatedly described as the result of "adoption" by faith in Christ, not a a literal descendant from the procreative activities of God.

"But when the fulness of the time came, God sent forth His Son, born of a woman, born under the Law, vs5, in order that He might redeem those who were under the Law, that we might receive the "adoption" as sons. vs6, "And because you are sons, God has sent forth the Spirit of His Son into hearts crying. "Abba! Father!" Vs7, Therefore you are no longer a slave, but a son; and if a son then an heir through God."

Now, it was Jesus Christ Himself who brought up Psalm 82:6. He "DID NOT" bring up this verse to prove that He's a Son of God like the rest of us or like the unjust/corrupt judges (vs2).

Truthfully, you bringing up Psalm 82:6 has no bearing/connection or even "context" (i.e. blasphemy from John 10:33) as it relates to Jesus Christ being the one and only begotten Son of God in my opinion.

So why did Jesus bring up Psalm 82:6? Jesus is turning the tables on the Jews and showing them that they are inconsistent. He's taking the Jew's statement about Him blaspheming to its logical conclusion. In effect, Jesus is saying, "If you say that I am blaspheming, you must also hold that God is blaspheming because He said to those by whom the word of God came, "ye are gods.

At John 10:36, "Your accusing me of blaspheming because I said, "I am the Son of God?" If anything, Jesus' response served to reinforce to the Jews that Jesus "though only a human being" in their mind was making Himself "God." Notice that Jesus does not take back His statement and clearly draws a distinction between Himself and those unjust judges.

The Son and Children of God

I'm not certain this entirely addresses your question, but the New Testament speaks of those who have been baptized into Christ as "wearing Christ" or "putting on Christ" through water baptism (Gal. 3:27).

This is significant because when God (as @Dottard explained, the Most High God: the Father) looks at the obediently faithful of Christ, He sees His Son rather than us. The following passages speak of our relationship to the Most High God, just as Christ is "the Son."

There is a great article on the clause "[You] are gods" (Psalm 82:6) on the GotQuestions website:

Psalm 82:1 says, “God presides in the great assembly; he gives judgment among the gods.” It is clear from the next three verses that the word “gods” refers to magistrates, judges, and other people who hold positions of authority and rule. Calling a human magistrate a “god” indicates three things: 1) he has authority over other human beings, 2) the power he wields as a civil authority is to be feared, and 3) he derives his power and authority from God Himself, who is pictured as judging the whole earth in verse 8.

This use of the word “gods” to refer to humans is rare, but it is found elsewhere in the Old Testament. For example, when God sent Moses to Pharaoh, He said, “See, I have made you like God to Pharaoh” (Exodus 7:1). This simply means that Moses, as the messenger of God, was speaking God’s words and would therefore be God’s representative to the king. The Hebrew word Elohim is translated “judges” in Exodus 21:6 and 22:8, 9, and 28.

Both Adam and Christ were sons of God Most High. Adam was directly created by Him (no parents) while Christ was born of the Holy Spirit (spiritually God) and Mary (physically human), thus He could be an Intercessor between the Most High God and the human race:

1 Timothy 2:5: "For there is one God, and one mediator also between God and men, the man Christ Jesus..."

Christ, however, was a sinless human being (as well as spiritually God) and was, therefore, the Son of God. Since God exists outside of time, He knows all that will ever take place in our finite world. Author C.S. Lewis once articulated this point:

You cannot fit Christ's earthly life in Palestine into any time-relations with His life as God beyond all space and time. It is really, I suggest, a timeless truth about God that human nature, and the human experience of weakness and sleep and ignorance, are somehow included in His whole divine life. This human life in God is from our point of view a particular period in the history of our world (from the year A.D. one till the Crucifixion). We therefore imagine it is also a period in the history of God's own existence. But God has no history. He is too completely and utterly real to have one. For, of course, to have a history means losing part of your reality (because it had already slipped away into the past) and not yet having another part (because it is still in the future): in fact having nothing but the tiny little present, which has gone before you can speak about it... Everyone who believes in God at all believes that He knows what you and I are going to do tomorrow... But suppose God is outside and above the Time-line. In that case, what we call "tomorrow" is visible to Him in just the same way as what we call "today." All the days are "Now" for Him. He does not remember you doing things yesterday; He simply sees you doing them, because, though you have lost yesterday. He has not. -- Mere Christianity

Here is a crude illustration, based on what Lewis wrote, depicting the way God the Father sees all of human history. Point A represents Creation (and Adam) and Point B represents the incarnation of Christ: 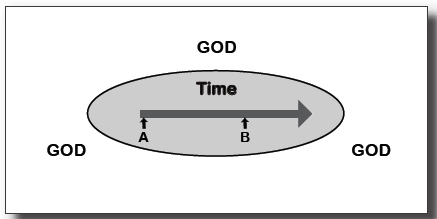 My reason for attempting to depict God and timelessness (eternity) is that God always knew what Christ (God incarnate) would do on earth, just as He knows all that we will do in our respective lifetimes. There are no surprises to the Most High God, the Father. Thus, Christ would be the Son to God Most High as a simple matter of fact.

"Most High" is simply another title of God the Father (Acts 7:48) because we have:

In his comments on Mark 5:7, Ellicott offers these observations:

(7) Thou Son of the most high God.—This is the first occurrence of the name in the New Testament, and is therefore a fit place for a few words as to its history. As a divine name “the Most High God” belonged to the earliest stage of the patriarchal worship of the one Supreme Deity. Melchizedek appears as the priest of “the Most High God” (Genesis 14:18). It is used by Balaam as the prophet of the wider Semitic monotheism (Numbers 24:16), by Moses in the great psalm of Deuteronomy 32:8. In the Prophets and the Psalms it mingles with the other names of God (Isaiah 14:14; Lamentations 3:35; Daniel 4:17; Daniel 4:24; Daniel 4:32; Daniel 4:34; Daniel 7:18; Daniel 7:22; Daniel 7:25; Psalm 7:17; Psalm 9:2; Psalm 18:13; Psalm 46:4, and elsewhere). In many of these passages it will be seen that it was used where there was some point of contact in fact or feeling with nations which, though acknowledging one Supreme God, were not of the stock of Abraham. The old Hebrew word (Elion) found a ready equivalent in the Greek ὕψιστος (hypsistos), which had already been used by Pindar as a divine name. That word accordingly appeared frequently in the Greek version of the Old Testament, and came into frequent use among Hellenistic or Greek-speaking Jews, occurring, e.g., not less than forty times in the book Ecclesiasticus. It was one of the words which, in later as in earlier times, helped to place the Gentile and the Jew on a common ground. As such, it seems, among other uses, to have been frequently used as a formula of exorcism; and this, perhaps, accounts for its being met with here and in Luke 8:28, Acts 16:17, as coming from the lips of demoniacs. It was the name of God which had most often been sounded in their ears.

Not the answer you're looking for? Browse other questions tagged luke psalms mark christology terminology or ask your own question.