How is the imputation of the righteousness of God effected in Christ and how can the believer be “in Him”?

I’m looking into the subject of justification and righteousness. My question is based on 2 Corinthians 5:21:

“For our sake he made him to be sin who knew no sin, so that in him we might become the righteousness of God.” (ESV)

And how does the believer come to be “in Christ”?

For clarification and to clear up any confusion, "effected" means executed, produced, or brought about. To effect is to bring about or cause something to happen. "Affected" means made an impact on. It is the past tense of the verb form of affect, which means to impact. Source: https://www.diffen.com/difference/Affected_vs_Effected

It just so happens that relates to the subject of my PhD dissertation that I am currently working on, so the subject is of great personal interest to me. In an answer here there is no way to answer these questions fully in this context

Since the arrival of the New Perspective on Paul in the late 70s this has been a hotly debated subject for a couple of reasons. Many New Perspective writers such as N. T. Wright, Richard Hays, and Robert Gundry have redefined justification in such a way that they argue the idea of imputation is not necessary and is in fact based on reformation writers such as Luther and Calvin. One famous quote by N. T. Wright, in What Saint Paul Really Said, shows his denial of imputation: "Righteousness is not an object, a substance, or a gas which can be passed across the courtroom." Of course I disagree with his assessment of justification and imputation. Wright misses the point that imputation is the idea of reckoning and not transference. It is not that we become righteous (even though the verb in 2 Cor 5:21 suggests that at a basic level), it is that we are reckoned as righteous. It is the idea that the verb γενώμεθα in 2 Cor. 5:21 is that we are clothed in the righteousness of God. What Paul is referring to here in 5:21 is directly referring to the New Birth (see the context) and that we are born again clothed in the righteousness of God.

At the heart of the reformation was the dispute over whether we are made righteous or declared righteous. The Catholic view was the former and the protestant view was that we are only declared (clothed as) righteous. The view one takes on 2 Cor. 5:21 is greatly affected by how one approaches the New Perspective on one hand and how one views the debate between the reformers and Catholicism on the other hand.

And how does the believer come to be “in Christ”?

Many, many books have been written on this subject over the last 500 years so in a few lines it is impossible to give this an easy answer. It involves subjects such as the ordo salutis, the order of the decrees of God.

My view is that the order is imputation first and then on this basis we are declared righteous (justified), and because we have been justified we are then declared to be in Christ, i.e. joined to the body of Christ. This order fits with the Old Testament and the fact that God cannot even look up sin. In this order we are clothed in His Righteousness and therefore He can declare us righteous and we can then be in His presence as part of the body of Christ. This is the order that I hold as the correct one. There are some Calvinists who reverse the first two so that they can put justification in eternity past (justified from eternity). In that incorrect view justification occurred in eternity past and then at the time of the cross or at the time of faith the righteousness of Christ was imputed to the believer's account. Then they are placed into the body of Christ at the moment of faith.

The primary focus of my dissertation answers two questions: (1) when are we declared righteous (justified)? and (2) on what basis are we declared righteous? N.T. Wright argues that justification occurs in three phases, and he makes the basis of justification "the whole life lived." There are some Calvinists (Piper, Schreiner, and MacArthur) who also argue that justification has some future element to it or that it is an already not yet proposition. I argue like Augustus Strong that justification is complete and final at the moment a sinner places their faith in the finished work of Christ. I am building the case using the verb for justified by looking at the tense of all the verbs to explain how they affect the question of timing. I have already touched on #2 that it is imputation alone that is the only basis that keeps salvation by grace through faith alone

Here is how I see the Greek of this verse:

The one knowing no sin He made to be sin for our sakes, that we ourselves might become God's righteousness in him. 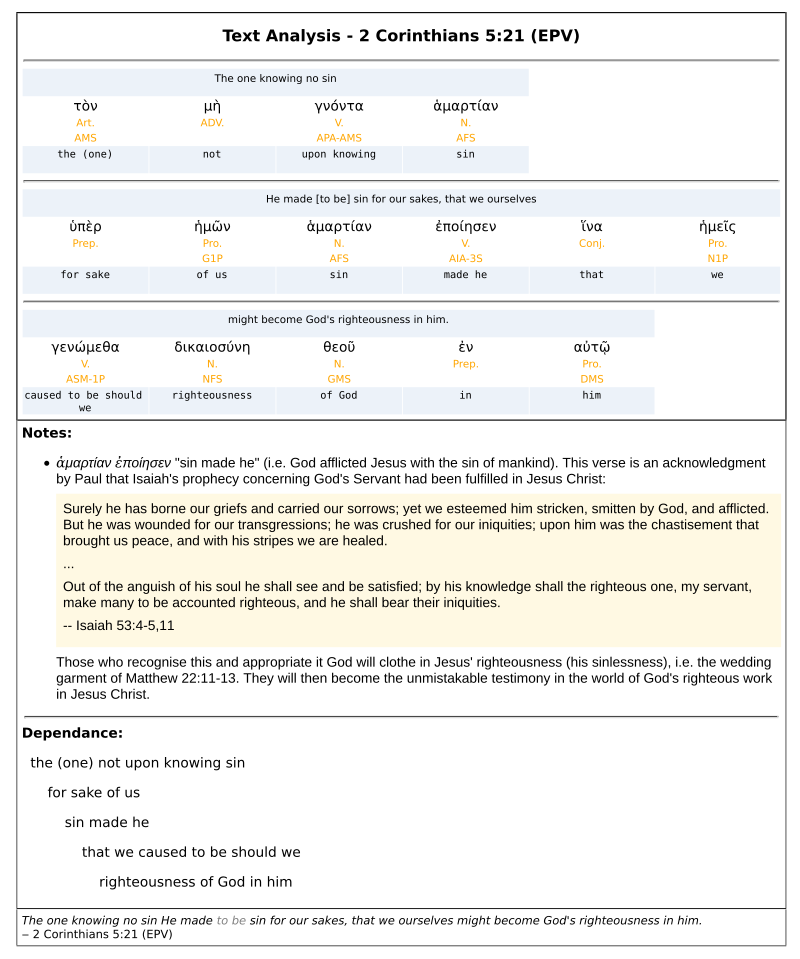 Paul makes reference in this verse to the righteousness of both Jesus and God.

The Jews to whom he was talking certainly understood what he was saying, though they could not comprehend it. But neither yet, it seems, has all of Christendom 20 centuries later.

It is a beautiful, difficult and paradoxical expression. What can it mean that through Father's dispensation Jesus, who knew not sin, was made "sin" for us? He committed no sin, and then what does it mean "he was made sin"? There can be many interpretations, one more profound and beautiful than other, I offer my one:

"sin" (ἁμαρτία) is translated as "missing", and as such it is a deficiency and privation of the fulness of divine perfection, so the one who "knows no sin" is the one who is only perfect, with no slightest taint of deficiency; therefore, not an angel (for even in the highest of them God finds "faults", that is to say, creaturely deficiencies, as written in Job 4:18, for they are not uncreated and properly divine), not a saint, but only God. Thus, the expression "knew not sin" means, as Paul often writes, that Jesus is equal to the Father in perfection (cf. Phil. 2:6), sharing the entire fulness of Godhead with the Father (Col. 2:9), and appealed by Paul most often by the divine name "Lord", to whom worship befits no less than to the Father.

But how He became "sin"? He, the uncreated Logos, the only-begotten Son, in the incarnation, adopted human created nature. Now, this nature was not damaged by the sinful inclinations, that has become a lot of all mankind since the fall of Adam, but in this adopted human nature, and He also humanly realised and perceived the human lot, the human maladies and afflictions, the power of sin that dragged humans and made them miserable; He suffered Himself thirst and hunger, physical pains, and psychic pains because of hard-neckedness of people around Him, the treason and abandonment even from His closest friends, so He perceived all gravest human sins, without sinning Himself. But whenever He met the infection of sin in people, He "took it on Himself", that is to say, healed them from it, taking this sin upon Himself figuratively, that is to say, consuming it in the fire of His divine love and divine forgiveness. Angel cannot forgive, only God can, and when Jesus authoritatively, divinely says "I forgive you", this means in fact, that He penetrates the depths of our essences as God and heals the infection of sin in us, figuratively speaking "taking this sin upon Himself".

This is, in my view, a tentative explanation of this paradoxical expression - "He became sin for us", that is to say, He gave heed to all entirety human sins so as to destroy this entirety within each of us in and through Himself, by taking those sins upon His sinless self, without tarnishing Himself, but rather drawing those sins to sinlessness through the "consuming fire" (Hebrews 12:29) of His divinity. Thus, paradoxically Christ became "sin" for sins, for if sins would "sin", that is to say, if sins would not behave in their proper sinful way, but rather in a non-sinful way (for this will be the sinning for sins), then they are destroyed as sins! For example, if a former alcohol addict will, through Christ, transform his addiction and inclination to alcoholism to an inclination of helping others getting out of this dangerous addiction, then his addiction has committed a Christly "sin" having being destroyed as a sin and having started to live a transformed life of righteousness. And thus, we become "righteousness in Christ" through work of His transfigurative grace in our hearts, for He, having become a Trap of sins, the "Sin" for our sins, transforms them from evil to good, thus destroying their tyranny upon and within us.

As to why Father's righteousness is also Jesus righteousness, I guess it is clear from what was said above: Father not only does not do the work of salvation in us without Jesus, but ontologically cannot do it, no less than Jesus Himself cannot do anything without the Father, and their salvational activity is one activity (cf. John 5:17). Can the sun's utility for all plants of the planet earth be separated from the utility of its rays? For in fact, sun's utility is expressed necessarily in its rays. Similarly and utterly similarly is with the Father and the Son, for both have shared one eternal glory even before creation of world (John 17:5), and exactly to this common glory and to this common righteousness the Father and the Son lead humanity, making us the living temples of Them (cf. John 14:23) and Their Holy Spirit (1 Cor. 6:19).

In II Corinthians 5:21, the word for 'made' sin is ποιεο poieo. Poieo is translated both 'do' or 'make' and there is no exact English equivalent. 'Effect' is the best I have ever managed to find.

It is exactly the same word as is used when Jesus 'made' water wine.

Something was added to the water which, when suffused throughout the water, was present everywhere within the water. There was something 'effected' which, existing in all parts of the water, made it wine.

As sin is contained in him, so is the righteousness of God contained in them that believe on him. They believe in the sufferings and death of Christ as the execution of judgment - by God - on his own beloved Son.

Believing that God's rightness effected this upon Christ, that very rightness is seen in their faith by God, himself. For it is God alone who justifies - personally - and none else.

Thus, as sin was contained in Christ, so the righteousness of God is contained within the faith of the believer. As a company - a body - the whole complement of all God's people are viewed in Christ as a new humanity.

This is a very complex concept to grasp. It is better to - first - consider justification as Paul expresses it in Romans. After fully grasping the doctrine in Romans, it will then follow more easily to understand this particular aspect in Corinthians.

Note : the expression 'the righteousness of Christ' never appears in scripture, is never alluded to in scripture and is never implied anywhere in scripture.

Not the answer you're looking for? Browse other questions tagged 2-corinthians righteousness justification or ask your own question.