In Proverbs 30:20 what is so evil about a woman wiping her mouth after she eats?

KJV Pro 30:20  Such is the way of an adulterous woman; she eateth, and wipeth her mouth, and saith, I have done no wickedness.

Or is "eating" a euphemism for coitus with a man besides her man and the point simply how brazen she is in her contempt for the 7th commandment? 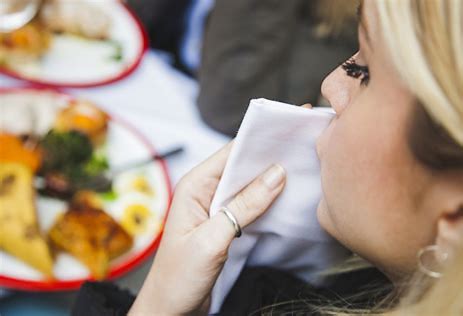 The idea of the verses 18-20 speaks about things that won't leave any "tracks" after they act: the eagle in the sky, the snake on the rocks, the ship in the water and relations between man and woman ( not a virgin one - עלמה so it won't leave tracks):

18“There are three things that are too amazing for me,

four that I do not understand:

the way of a snake on a rock,

the way of a ship on the high seas,

and the way of a man with a young woman.

Verse 20 provides an example of this kind of relation: a cheating wife. How women can cheat without feeling any shame, and continue with her life like nothing happen?:

NIV Proverbs 30:20 "This is the way of an adulterous woman: She eats and wipes her mouth and says, 'I've done nothing wrong.'

The writer uses a metaphor from eating: it's like eating (forbidden food - IE: pork) and then wiping her mouth and continuing without any guilt saying to herself - "I didn't do anything bad."

And what is it that the writer of the proverbs finds so incomprehensible here? While the eagle, the snake, and the ship doesn't make any sin while they act - both a cheating wife and her fellow are sinning - and GOD sees everything ( also the one that eats non-kosher ). So how can they act like that?

Eating verbs/roots for sexual relations are often been used in the poetry part of the Bible - like Song of Songs etc..

We read this in the context of a woman's infidelity or promiscuity, but I offer another angle to it: We are considered the Bride of Christ as a community of his church. We can see this as not an actual woman, but for us all as Christ's Bride.
It's a bit eye-opening if you stop and think about it in this way.

This basically shows that the woman is not saved, therefore no conviction... if she was saved the holy spirit, would be prodding her... she wouldn't be able to live a lifestyle of sin, and comfortably ignoring the things of her savior. ., there will always be evidence of truly being born from above! She doesn't have it...

Not the answer you're looking for? Browse other questions tagged proverbs figure-of-speech sexuality or ask your own question.

6
What are the proverbs about giving collateral for someone else teaching about loans?
2
Proverbs 31:16 - Did the woman use her resources to purchase the field?
2
What is Proverbs 8:23 asserting about the origin of wisdom?
2
Is Proverbs 25:20 about singing songs to an “evil” heart or to a “sad” one?