Those that were numbered of them, even of the tribe of Simeon, were fifty and nine thousand and three hundred.

Now they that died in the plague were fourteen thousand and seven hundred, beside them that died about the matter of Korah.

And those that died in the plague were twenty and four thousand.

These are the families of the Simeonites, twenty and two thousand and two hundred.

Could it be that the most people who died in the plague & rebellion belonged to the tribe of Simeon for when they left Egypt they were 59 300 & after the 2nd census they were only 22 200,a difference of 37 100 which almost matches the total that died in the rebellion & plague which is 38 700?

Q: Could it be that the most people who died in the plague & rebellion belonged to the tribe of Simeon?

A: While mathematically possible, it is unlikely.

Here is a table of the two census taken: 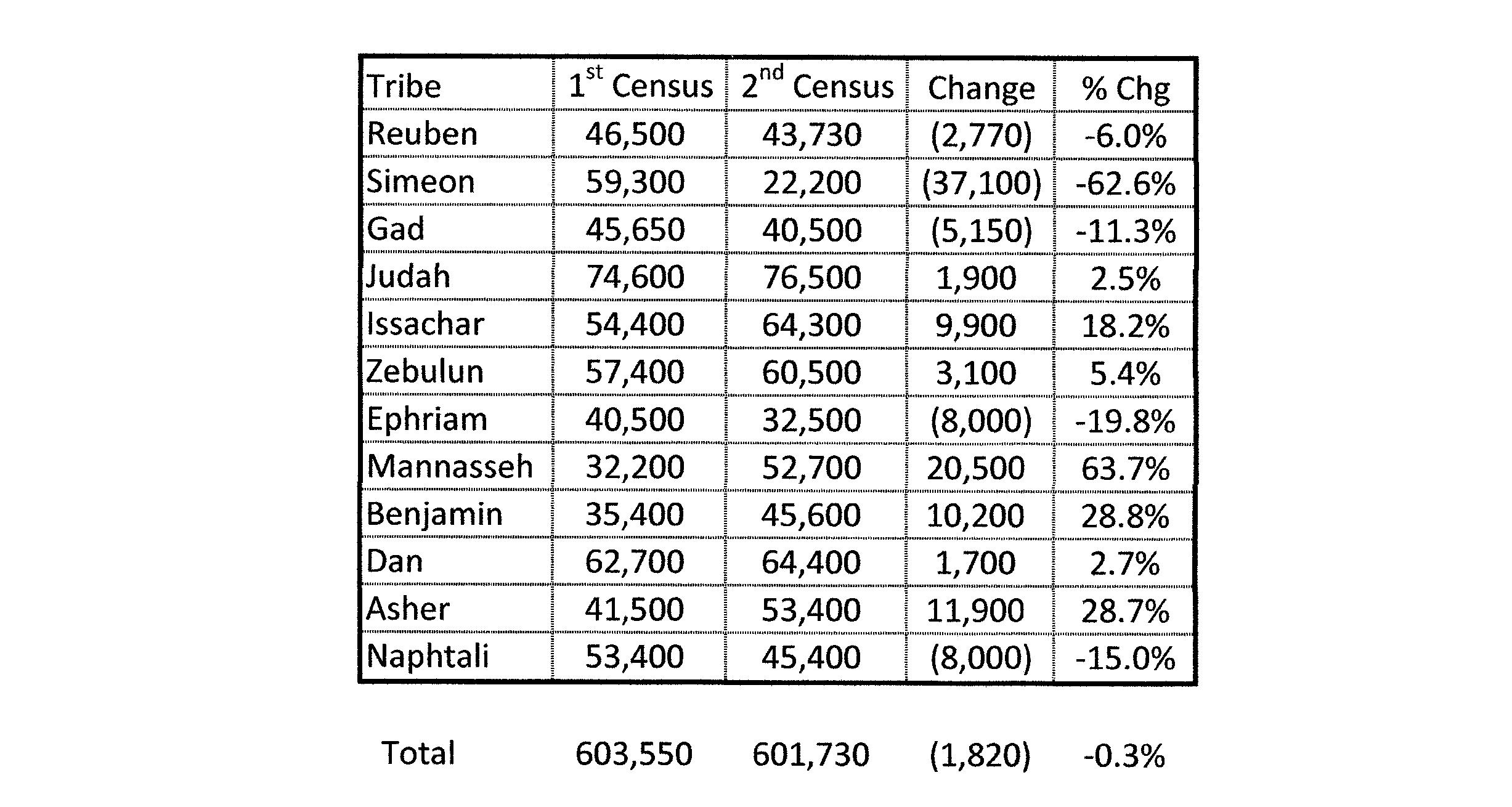 The tribe of Simeon experienced the greatest loss, but there were 4 other tribes which also decreased. For that reason alone there does not appear to be any basis for associating the losses from the plague and Ba'al Peor strictly or even predominately to the tribe of Simeon.

Moreover, the decline in size for any tribe had nothing to do with the cause of death. The consequence for rebelling was that all who were counted in the first census would die:

28 Say to them, ‘As I live, declares the Lord, what you have said in my hearing I will do to you: 29 your dead bodies shall fall in this wilderness, and of all your number, listed in the census from twenty years old and upward, who have grumbled against me, 30 not one shall come into the land where I swore that I would make you dwell, except Caleb the son of Jephunneh and Joshua the son of Nun. 31 But your little ones, who you said would become a prey, I will bring in, and they shall know the land that you have rejected. 32 But as for you, your dead bodies shall fall in this wilderness. (Numbers 14:28-32 ESV)

This means that 100% (except for Joshua and Caleb) of those in the first census would die. Since 100% die, reduced tribal population at the second census was a result of having fewer "replacements" during the 38 years (technically the first 18), not a function of dying (regardless of reason).

There were 2 ways of being counted in the second census:

Since we are not told the number of under 20's there is no way of knowing the exact impact of these factors on an individual tribe. Simeon's loss could be explained by fewer under 20's at the first census or more under 20's at the second or simply by having fewer children during the first 18 years.

Nevertheless, it is mathematically possible that the 2 numbers cited reflect that the plague and Ba'al Peor had a disproportionate effect on the tribe of Simeon. Beside the law of averages, there are reasonable factors against making that assumption. At Ba'al Peor it appears that every tribe participated (although Zimri from the tribe of Simeon is specifically mentioned).

The plague of Numbers 16 was halted when Aaron ran through the camp with his censer. Depending on which direction he ran, either the tribes to the South or the North would be the place he ended, and presumably those tribes would be impacted more than those in the direction he started. It is interesting that all three tribes to the South (Reuben, Simeon, Gad) did have a lower count at the second census, suggesting Aaron ran counter-clock wise from East to South, but even if the plague had a disproportionate effect on those tribes the total was only 14,700 some of which had to come from the other tribes. Even if Aaron arrived in the South last, those that died would be from all 3 tribes and it is hard to see how Simeon could be effected by more than another tribe by more than 1-2,000.

While there are other factors, the most reasonable assumption for the change in the tribe of Simeon is fewer children during the first 18 years of wandering.

Simeonites! What lesson can learn from this. When Jacob byeing his sons told levi and dimeon that theybwould be counted among their brothers.

Not the answer you're looking for? Browse other questions tagged numbers or ask your own question.

6
How can we reconcile Numbers 25:9 & 1 Corinthians 10:8?
1
In Numbers 3:46 what method was used to select the 273 firstborn sons who were to redeemed?
3
Why does the number of Levites not tally in Numbers 3?
3
Does Numbers 3:43 refer to “all” the firstborn sons of Israel?
1
In Numbers 33:34-39 what is the correct route taken by the Israelites to the promised land?
3
In Numbers 31 why didn't God punish the Moabites in the incident of Baal of Peor?
3
Did Phinehas stay outside the camp after killing Zimri & Cozbi in Numbers 25?