In Numbers 33:34-39 what is the correct route taken by the Israelites to the promised land?

When Moses narrates their journey from Egypt to Canaan it seems after Edom had refused them passage they went to mount Hor.

But in some biblical maps it seems they did return to Eziongaber before proceeding to mount Hor.

Did Moses deliberately skip the return to Eziongaber or the biblical map illustration is wrong?

Well this is really a very complicated subject, and the question has more to do with archaeology and geography than it has with biblical hermeneutics, indeed for over a century scholars have been trying to determine the correct route of the Israelites in the wilderness and there is still much disagreement, but I will try to keep my answer as simple as I can. But first let me restate the problem.

From the bible it seems like the Israelites took a simple route, moving from Ezion-Geber to Kadesh (which is in the wilderness of Sin) where they stayed for 38 years. There they sent messengers to Edom (see Num. 20:14) to let them through but were denied entrance from them so they were forced to go around the lands of Edom and Moab until they reached Arnon where they fought the kings of Aram and Bashan. The conventional biblical maps however portray a very different and complicated route (see map below). According to these maps, the Israelites went up northwest towards Egypt and Canaan until they reached Kadesh, then wandered around aimlessly for 38 years only to return to their original starting point in Ezion-Geber and only then continued their journey to Edom. The question is, what prompted them to draw such a complicated route, and are they correct in drawing it this way?

The only stop of the exodus route that is known with certainty is Ezion-Geber. Most scholars agree that it is at the tip of the Gulf of Aqaba Near Elat. Scriptures says that it was located on the shore of the Red Sea and in the land of Edom (1 Kings 9:26), it was also used as a seaport during Solomon's reign, so it was most probably located there (ibid.), so all reconstructions of the exodus route must use Ezion-Geber as their starting point. See here for more on this.

The location of Kadesh/Kadesh Barnea on the other hand is not so simple. Most biblical scholars and archaeologists identify it with Ein el Qudeirat near Wadi Al-Arish which is the border between Egypt and Israel. This however creates lots of problems, since it's 27 km east of Wadi Al-Aris it's well within the border of the land of Israel. Furthermore, there would be no reason for the Israelites to return to Ezion-Geber and the transjordan area and ask the Edomites for permission to enter their land if they were already at the border of the land of Israel in Kadesh Barnea and could've easily avoided the lands of Edom Moab and Aram which are all located Transjordan. Why would the Israelites choose such a long and complicated route? Indeed because these scholars choose to identify Kadesh with Ein el Qudeirat they must create an imaginary route of the Israelites wandering in the wilderness and returning to Ezion-Geber for no apparent reason making the entire route seem arbitrary and pointless. Indeed as the OP has noted, nowhere does the bible say that the Israelites returned to Ezion-Geber and retraced their steps or that they wandered in the wilderness at all, in fact scripture indicates that they sat in Kadesh itself for 38 years and moved on in a straight line from there to Mount Hor which is at the border of Edom.

For this reason, this scholar rejects this location and chooses El Beidha instead for Kadesh which is 5 km north of Petra. See map below. Indeed this location is also supported by tradition as Josephus and Eusebius have identified Kadesh with Petra. If we accept this, then the route is much simpler and straightforward. The Israelites never left transjodan but stayed in the area. From Ezion-Geber they moved on to El Beidha and Mount Hor which are all located at Petra according to the scholar cited above. Since they were in the area of the transjordan at the border of Edom and needed to get to the other side they needed permission from the Edomites to enter and pass. See here for more on this. 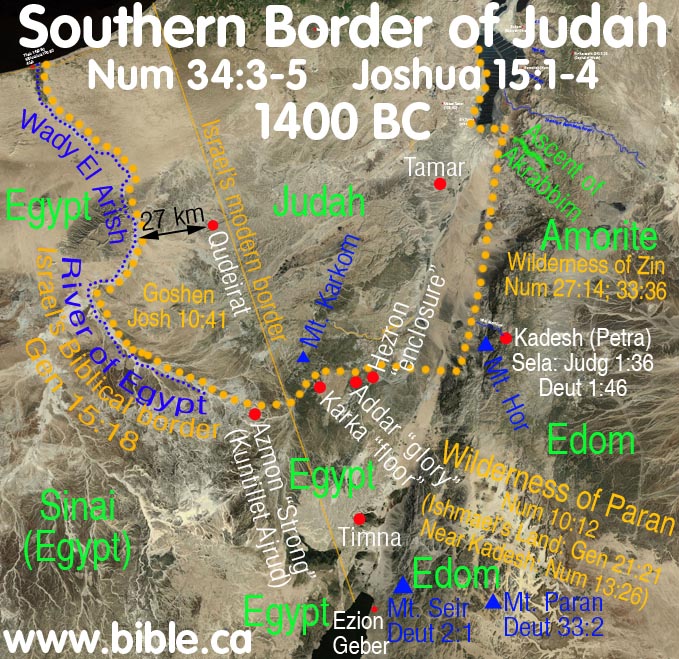 The conclusion is obvious. If we wish to defend the conventional location of Kadesh and exodus route then we will have to deal with the numerous difficulties that arise from it, and come up with some sort of explanation as to why the Israelites took such a complicated and twisted route. But if we accept Josephus' tradition that Kadesh is in the Transjordan near Petra, then the exodus route makes more sense and so do the biblical verses.

Not the answer you're looking for? Browse other questions tagged history numbers geography or ask your own question.

3
Is the territory of the Negeb considered part of the wilderness?
3
Defense of a variant of Numbers 22:5 about the location of Pethor
4
What's the connection between Sinai and Seir?
2
Could Moses's instructions have indirectly lead to the bad report of the ten spies in Numbers 13:17-20?
2
Did the Israelites appoint a leader to take them back to slavery as alluded in Nehemiah 9:17?
2
Why was the punishment of refusal to enter Canaan seemingly more severe than that of the golden calf?
2
Was it the fathers or sons of the rebels who were being addressed by Moses in Deuteronomy 11:1-7?
0
Did Aaron die at mount Hor or at Moserah?