Does the author of Psalm 103:2 exhort himself to “bless the LORD” or is he referring to the LORD as the “soul” within himself?

Bless the Lord, O my soul: and all that is within me, bless his holy name.

My question: Does the singer command his soul to "Bless the LORD" , or is he saying that the LORD IS the soul within him?

The question boils down to whether "my soul" is:

In addition to the contextual clues noted by other answers, the syntactical markers that allow distinction between subject and object are (unusually!) clear in this Psalm:

The subject should agree with the verb in gender and number. "My soul" is feminine singular, indicating that the second person subject of the imperative is also feminine singular, matching the inflection of the verb "bless". From this we conclude that "my soul" is the addressee: "o my soul".

The direct objects are marked in this case with the pre-posited "DO" = direct object marker (ʾet). There is only one verb1 in this verse: "bless". Thus, "the "LORD" and "his holy name" are objects of blessing.

Translating "my soul" (nepeš) as the addressee of an imperative yields English that is decidedly Biblio-speak. However, nepeš with a pronominal suffix ("my soul") is commonly considered to be a reflexive pronoun in Hebrew. English translations have never really found a way around this ("bless the LORD, o my self"??), which is unfortunate in that it makes normal Hebrew into odd English, but with respect to accuracy perhaps it's for the better:

Though נֶַ֫פֶשׁ is commonly said to be used as a substitute for the reflexive pronoun, a syntagmatic analysis of its usage suggests rather that it retains its lexical meaning to varying degrees.2

1. Not unexpectedly in the terse style of the Psalms, the repetition of "bless" in the line 3 is not explicit, being "gapped" from line 1.

This passage is not a blessing upon God but rather an exhortation that David is making to himself. In this context, "soul" simply means "self". David is telling himself to:

Does the singer command his soul to "Bless the LORD" , or is he saying that the LORD IS the soul within him?

David is saying this psalm to his creator. He is definitely not calling himself "The Lord." Saying that "The Lord is the soul within him" can almost be interpreted as being The Messiah. David was anointed so technically, he was "a messiah," but that's not what David is proclaiming here.

"The Lord" is an English term that was placed in the tanach (Old Testament) each time the creator's name is used -over 7,000 times- so there is no confusion: David is not referring to himself as "The Lord." In Hebrew, "The Lord" is referred to as "Ha Shem" ("The Name") and in ancient times, was written using the tetragrammaton, which means "four consonants." Those four consonants, in English, are YHWH (some say, YHVH). Here's what they look like in one of the Dead Sea Scrolls. The tetragrammaton is in paleo-Hebrew, though this is not Psalm 103. 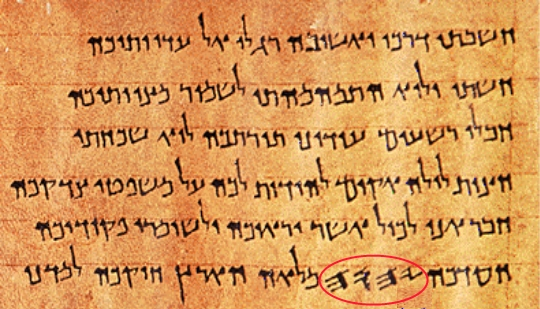 David is praising his creator with everything he's got ("with all that is within me.") He was the second king of Israel and he underwent a great deal of strife. He is known for his amazing faith, and also for his sins. He had reason to praise YHWH.

My days are like a shadow that declineth; and I am withered like grass. But thou, O LORD, shalt endure for ever; and thy remembrance unto all generations.

0
Can you help illuminate part of this Psalm(103)?
8
Is יהוה ever transliterated in the Septuagint?

1
Psalm 23 - long long pursuit of the house of the LORD
7
Is Psalm 104:35 an assertion or a prayer?
2
What the second part of Psalm 7:7 actually mean? Does that mean return them with favors/blessings?
1
(Psalm 15:5) Associate the fragment verse “He does Not put out his money at interest” with “against the innocent”?
5
What is the meaning of bless the Lord?
1
What is the difference between bless and praise in Psalm 145:2?