No human being can tame the tongue. Really?

7 All kinds of animals, birds, reptiles and sea creatures are being tamed and have been tamed by mankind,

This reminds me of my younger days: behaving like animals :)

8 but no human being can tame the tongue. It is a restless evil, full of deadly poison.

By the grace of God, the older I get, the more I feel that I have tamed my tongue to some extent. There must be something wrong with this feeling of mine according to James. What's wrong with it? Does taming mean perfection? What's the imagery here?

This question asks if this verse is consistent with reality rather than other scripture. Thus, here is related science. Notice in the image below the physical parts of the body related to speech take up a disproportionally large part of the primary motor cortex in the brain. 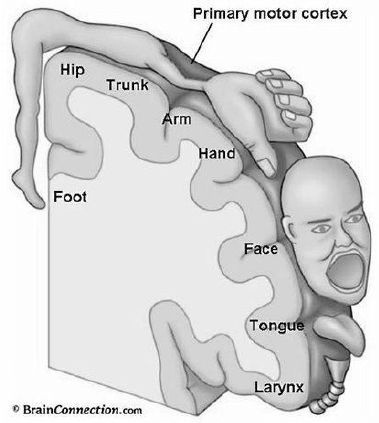 Then, notice that thinking a word and speaking that word take up almost identical locations in the brain.

Despite the neural activity from imagined or actual speech differing slightly, the decoder was able to reconstruct which words several of the volunteers were thinking, using neural activity alone (Frontiers in Neuroengineering, doi.org/whb). __ Helen Thomson, “Brain decoder can eavesdrop on your inner voice,” NewScience, 29 Oct 2014,

Interestingly, the researchers found that the brain began to prepare the motor areas to respond very early, during initial stimulus presentation, suggesting that we get ready to respond even before we know what the response will be.

“This might explain why people sometimes say things before they think,” said Avgusta Shestyuk, a senior researcher in UC Berkeley’s Helen Wills Neuroscience Institute and lead author of a paper reporting the results in the current issue of Nature Human Behavior. – Robert Sanders, “Tracking Thoughts Moving Through the Brain” University of California Berkeley, University Researcg, January 17, 2018

No human being can tame the tongue. Really?

The Commentary on the Letter of James has the following on chapter 3 verse 8:

8 But the tongue, not one of mankind can get it tamed
While successful in getting mastery over all kinds of creatures, including ferocious beasts and poisonous serpents, sinful man has not been able to achieve perfect tongue control. He has mastered animals, but cannot master his tongue. His exercise of dominion is faulty.

An unruly injurious thing, it is full of deathdealing poison
The tongue is "unruly," "unsettled" (Kingdom Interlinear Translation). Sin inherited from Adam has unsettled the tongue, making it restless, unruly. It will not "settle down" to be controlled. Such a thing did not happen to the animal world. Hence, animals respond normally to men's efforts to tame them, while the tongue does not. A tongue that caimot be restrained but that becomes the instrument for making cutting, abusive or slanderous remarks, or that misleads by its teaching, is truly unruly and injurious. Since no one can fully prevent the tongue from doing these bad things, it requires the most diligent awareness, watchfulness and effort on the part of not only teachers but every Christian; otherwise a person's tongue can bring him to ruin. Because of the tremendous harm that it can bring about, it can be a dangerous instrument filled with deadly poison. (Compare Psalm 140:3; Romans 3:13.) In fact, fights that result from unbridled speech are not infrequently responsible for the loss of human life.

Think of the untold suffering and the billions of deaths caused by the acceptance of the first lie, told by Satan in the Garden of Eden! (John 8:44) We have many other examples of the deaths of thousands of people because of the deception of the false prophets and other leaders of the people. (Jer. 23:13, 14, 19-22; 50:6, 7; Isa. 19:11- 13) Bad counsel on the part of King Rehoboam's associates and rash, harsh language on his part caused the kingdom of Israel to split and led to many wars. (1 Ki. 12:8, 14, 16, 17) Deceptive leadership of the people of Israel led the nation into committing the greatest crime in history- the murder of the Son of God. Both the rulers and the people acted in ignorance, but the ignorance of the rulers was more culpable, because they were blinded by their selfish desire to maintain their wealth and power, while the people followed their misleading speech and counsel. (Acts 3:14- 17; John 11:45-50; 12:9-11; Matt. 23:27, 28; 12: 31, 32) False teachers in the early Christian congregation, and since, have turned many persons away from God. (1 Tim. 1:18-20; 4:1, 2; 2 Pet. 2:1-3) These things provide food for serious thought on the part of men who aspire to be teachers in the Christian congregation.

[Note: The Commentary on the Letter of James is no longer in print but I was able to find a pdf online for reference.]

No matter how much control we may think we have over what we say, our tongue ultimately will betray us. In unguarded moments, it will utter things we did not intend to say or reveal our inner thoughts and motives, even those of which we are not consciously aware.

For the mouth speaks from that which fills the heart. – Mt 12:34

Thus only a person who is perfect will not stumble in what they say:

For we all stumble in many ways. If anyone does not stumble in what he says, he is a perfect man, able to rein in the whole body as well. – Jam 3:2

In my personal experience, unguarded words offer us a window into our hidden attitudes, motives, and intentions. Though they can be the cause of self-reproach and shame, if we attend to them, they can also be an important tool for self-knowledge and self-correction.

The passage in question must be properly identified for genre before it can be interpreted. The OP suggests perhaps it is not literal, but uses imagery. Lets do some close reading, for signs he may be right.

The passage is ripe for interpretation in symbol and riddle. As Paul deals with the misuse of tongues in the church, it might be argued that he was influenced by James in this matter, to have a 'good conversation in faith, as he deals with them.

On the issue of 'taming':

If the passage is interpreted as riddle, the the critters of Genesis 1 represent people of various types, and 'taming' is the 'training in righteousness, mentioned as one of the purposes of scripture. The argument here is that when the heart is corrupt with ego, expressed in the uncontrolled babbler, he cannot be trained in righteousness.

'Perfect' is being made complete in Christ. The interpretation of riddle might suggest that the babbler does not have a foundation of Christ's salvation upon which to build 'training in righteousness'.

Not the answer you're looking for? Browse other questions tagged james or ask your own question.