What is the meaning of the face-cloth rolled up in John 20:7?

There is one detail, interesting to me, in the following passage: 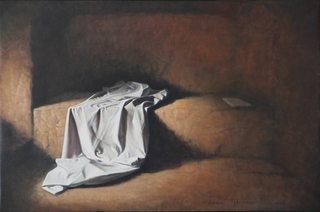 John says that the face-cloth was separate from the linen wrappings, rolled up. Does this have a special meaning?

This is an interesting question, because of the "internet legend" concerning the "folded napkin"(ie: sign that the Master was returning). Numerous scholars, from both Rabbinic and Christian sources have debunked this; this one, and in this one where the author says, "

In summary, I believe we can concluded that the circuating story about the sigificance of Jesus folding his burial cloth is at best non-biblical, and at worst a fraudulent attempt to provide a spiritualized meaning to an already clear text.

The rest of his remarks, including the Mishneh source which started the confusion are found here.

The Problem that exists however, when you 'de-bunk' a particular erroneous interpretation is "Well then, why DID the author make a point of including a particularly mundane detail in the most important event of Christianity?"

The difficulty stems with understanding vs. 7,

"ouj metaV tw'n ojqonivwn keivmenon ajllaV cwriV" ejntetuligmevnon eij" e{na tovpon *Much dispute and difficulty surrounds the translation of these words. Basically the issue concerns the positioning of the graveclothes as seen by Peter and the other disciple when they entered the tomb. Some have sought to prove that when the disciples saw the graveclothes they were arranged just as they were when around the body, so that when the resurrection took place the resurrected body of Jesus passed through them without rearranging or disturbing them. In this case the reference to the soudavrion being rolled up does not refer to its being folded, but collapsed in the shape it had when wrapped around the head. Sometimes in defense of this view metav (which normally means “with”) is said to mean “like” so that the comparison with the other graveclothes does not involve the location of the soudavrion but rather its condition (rolled up rather than flattened).

In spite of the intriguing nature of such speculations, it seems more probable that the phrase describing the soudavrion should be understood to mean it was separated from the other graveclothes in a different place inside the tomb. This seems consistent with the different conclusions reached by Peter and the Beloved Disciple (verses 8-10). All that the condition of the graveclothes indicated was that the body of Jesus had not been stolen by thieves. Anyone who had come to remove the body (whether the authorities or anyone else) would not have bothered to unwrap it before carrying it off. And even if one could imagine that they had (perhaps in search of valuables such as rings or jewelry still worn by the corpse) they would certainly not have bothered to take time to roll up the facecloth and leave the other wrappings in an orderly fashion!*(taken from https://bible.org/seriespage/exegetical-commentary-john-20)

So there appears to something purposeful and intentional in the "wrapped or folded" 'soudavrion' or headcloth that appeared separately from the graveclothes, as if Christ were telling His followers,"It's Me, I did this, this isn't the work of a charlatan, or grave robber".

Although the practice didn't occur until the Middle Ages, during the Seder, or Passover meal, the "afikoman" was the "hidden matzoh" of the 3 matzohs. It was wrapped in a linen cloth, to be eaten later, at the end of feast. It also has become customary to 'hide' this portion for the children to find, and then return to be eaten in the conclusion of the Seder. I found this comment by a Jewish Rabbi interesting:

But it is toward the Passover of the Future that our memories are directed. The redemption is not over. There is fear and poverty and sickness. There is a trembling on earth. Around us are the plagues of pollution, and images of fiery nuclear explosions in the clouds, not like the cloud of glory and the pillar of fire that led our ancestors through the wilderness. The broken matzah speaks to our times, shakes us by the shoulders and shouts into our hearts, "Do not bury your spirit in his­tory. Do not think it is over, complete, that the Messiah has come and you have nothing to do but to wait, to pray, to believe."(taken from here)

Perhaps this "folded napkin" was a sign to a future nation of Israel that the Messiah would "appear" and fulfill all the Messianic prophecies of a King reigning to Israel.

John seems to be writing about the great contrast he noticed, between what he found after Jesus' resurrection and what he’d witnessed when Lazarus was brought back to life. He may have even noted the stench from Lazarus, with his needing to be unbound vs. Jesus’ linens and napkin perfectly set as they were.

When He had said these things, He cried out with a loud voice, “Lazarus, come forth.” The man who had died came forth, bound hand and foot with wrappings, and his face was wrapped around with a cloth. Jesus *said to them, “Unbind him, and let him go.”

With John 20:7 and Jesus’ linen wrappings “lying there”, with the face-cloth separate yet very close to or exactly where Jesus' body had been, it’s as if Jesus’ just slipped out and no human hand could have possibly placed everything so perfectly.

Once Peter arrived and John saw the face-cloth, it seems that finally confirmed everything for John such that he “saw and believed”.

Yes, there are meanings at two levels. At the surface level, this was intended as evidence that grave-robbers had not taken Jesus' body, but that he had indeed risen from the dead. Had grave-robbers taken the body, they would probably have taken it, cloths and all, otherwise simply have ripped off the cloths and left them in an untidy mess. That the cloths, especially the headcloth, were in an apparently tidy state, the observer would have realised that something special had occurred and, after having recently seen Lazarus raised from the dead, a believing observer ought to have realised that Jesus had been raised.

At a deeper level, we see that Peter, although the first to enter the tomb, did not have enough faith to understand that Jesus had risen. However, the beloved disciple realised this as soon as he entered the tomb. Arthur J. Droge ('The Status of Peter in the Fourth Gospel: A Note on John 18:10-11', republished on JSTOR) says a number of commentators have observed that the Fourth Gospel exhibits a marked tendency to exalt the Beloved Disciple at the expense of Peter, with frequent episodes in which the Beloved Disciple and Peter appear as rivals.

Studying Jewish tradition, when the man of the house would get up after dinner, he would either roll up his napkin signifying he's done to his servants and if he folded it up neatly, it meant he was not finished he was coming back.

And they understood the meaning of this and that's why the Holy Spirit put it in the Bible:

and the face-cloth which had been on His head, not lying with the linen wrappings but folded up in a place by itself. John 20:7 (NASB)

A Messianic Rabbi said it was a Tzitzit, a prayer shawl that they put over their heads to pray, that had been wrapped around Yeshua's head. When they take them off they respectfully fold them up.

God's face is so significant throughout scripture it stands to reason that the covering of Jesus' face would be treated with respect and distinction at his resurrection.

John refers to himself as “the other disciple”. He doesn’t refer to himself by name. He is modest. Not proud, nor braggadocio. This is a Gospel. I do not believe the Lord would allow a braggar’s writing to be included as a gospel. He didn’t say “I outran Peter”, or anything to seem he was superior over his brother. To say the other disciple is Lazerus is a mistake. The other disciple is the author of the book....John. You need to read it again. And pray when you read it.

The significance is because it was Lazarus who saw it folded and was the first to believe, not John.

Read the gospel account again. You will never once find John's name connected with the Disciple whom Jesus loved, this is based on the tradition of men, not Scripture.

reread the end of the gospel, makes no sense if it's John. Makes perfect sense go back and reread the gospel without the tradition of men clouding your mind.

user5983user5983
1
1
Add a comment  |
Highly active question. Earn 10 reputation (not counting the association bonus) in order to answer this question. The reputation requirement helps protect this question from spam and non-answer activity.

2
What is the importance of the folded napkin in the empty tomb?
13
Who was the Beloved Disciple?
7
Were the burial garments of Jesus folded neatly, or were they apparently discarded, as the body removed?
3
The mention of the σουδάριον in the fourth gospel

11
Why did John make such a big deal about being a faster runner than Peter?
3
The mention of the σουδάριον in the fourth gospel
9
Why does John describe himself or another disciple "Jesus loved" using phileo love ἐφίλει?
7
What did the disciple whom Jesus loved (ἐφίλει) believe?
5
At John 20:6,7, is what Peter saw in the tomb his "lightbulb" moment to recognize Jesus as the Messiah?
6
Did Lazarus stink when he came out of the tomb?
1
From the account in John 18 did Peter just deny being a follower of Christ, or did he actually disown following Christ?
7
Were the burial garments of Jesus folded neatly, or were they apparently discarded, as the body removed?
1
Why did Christ initially reveal himself to Mary only in John 20?