Where, and how, did Josiah die?

The death of Josiah is reported differently in 2 Kings and 2 Chronicles. The Kings account is brief:

[WEB] 2 Kings 23 : 29 In his days Pharaoh Necoh king of Egypt went up against the king of Assyria to the river Euphrates; and king Josiah went against him; and Pharaoh Necoh killed him at Megiddo, when he had seen him. 30 His servants carried him in a chariot dead from Megiddo, and brought him to Jerusalem, and buried him in his own tomb. The people of the land took Jehoahaz the son of Josiah, and anointed him, and made him king in his father’s place.

It's a little longer in Chronicles:

[WEB] 2 Chronicles 35 : 20 After all this, when Josiah had prepared the temple, Neco king of Egypt went up to fight against Carchemish by the Euphrates, and Josiah went out against him.
21 But he sent ambassadors to him, saying, “What have I to do with you, you king of Judah? I come not against you today, but against the house with which I have war. God has commanded me to make haste. Beware that it is God who is with me, that he not destroy you.” 22 Nevertheless Josiah would not turn his face from him, but disguised himself, that he might fight with him, and didn’t listen to the words of Neco from the mouth of God, and came to fight in the valley of Megiddo. 23 The archers shot at king Josiah; and the king said to his servants, “Take me away, because I am seriously wounded!”
24 So his servants took him out of the chariot, and put him in the second chariot that he had, and brought him to Jerusalem; and he died, and was buried in the tombs of his fathers. All Judah and Jerusalem mourned for Josiah.

The slight differences in referring to Megiddo are, possibly, less significant (although this, too, can contribute to quite different accounts of Josiah's death): 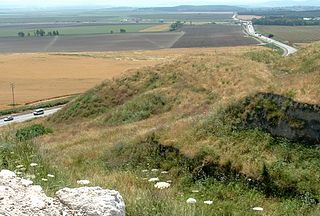 This comparison highlights the key differences:

There is a further complication in that the Kings account can be read as a "simple" assassination, rather than death in battle, whereas the Chronicles account is explicit in describing the injuries inflicted during battle.

So far the above addresses "how" he died. He died from archers' arrows wounding him (and not immediately killing him) in a battle at Megiddo, which archers were under the command of Neco, and thus he is killed by Neco.

The slightly more challenging aspect is the language about "where" he died. However, that is more an issue in translation than in the original. There appears to me to be a reasonable solution:

In 2 Kg 23:30 the word is מֵת (met) which is the Qal Active Participle form of the verb מות (mut), "to die." There is a lot of flexible range in meaning as a participle. It is used in some cases to refer to the possibility of dying (without it actualizing), such as in Gen 20:3 ("you are a dead man" [ESV/NKJV] to Abimelech who did not in fact die here) and Exo 9:6 ("not one died" [NKJV] of Israel's animals) and other places.

The participle can also refer to the "process of dying." The participle often expresses "simple duration" of an event, the active specifically being associated to an "uninterrupted exercise of an activity."

So the passage can be translated:

His servants carried him in a chariot dying from Megiddo, and brought him to Jerusalem, and buried him in his own tomb.

This allows him to actually finish the process of dying in Jerusalem according to 2 Chr 35:24.

Of course, it can also be translated as it has been as "dead," referring to his having died before reaching Jerusalem, which can still be handled (though not as elegantly in my opinion)...

Clarifying the Translation of 2 Chr 35:24

The word here is וַיָּמָת (wayyamat; Qal Imperfect 3rd Masculine Singular). Being the imperfect, it can handle matching to either possibility of the translation from 2 Kg 23:30.

If 2 Kg 23:30 is "dying," then the imperfect still expresses an idea of continuance of a process for some period, which could be a successive stage of his "dying" process still happening once he reached Jerusalem. Such succession is reflected in the imperfect, and can be contemporaneous to the entering into Jerusalem.

If 2 Kg 23:30 is "dead," then the imperfect can express a relationship to the present reference (entering into Jerusalem) in which the action is the continuing state previously entered into. If so, the notation is simply more a summary idea that the king "had died" and was "still dead" upon entry into Jerusalem.

I would lean toward the "dying" in the chariot and "died" in Jerusalem, as the waw consecutive in 2 Chr 35:24 just seems to point toward that successive idea.

So Josiah died by arrow wounds from the archers of Neco's army, most likely the process beginning at Meggido and ending at Jerusalem.

God takes the going ins and outs of his children's lives very seriously, It would seem to me however, that God also oversees his children's deaths, how we are going to die, process and all. In the case of King Josiah, we see as stated in the Bible, that he would "die in peace". And that he would be brought back to his "fathers" land and would be buried in Jerusalem. Even though we might not understand why God would allow a heathen King killing his servant, we know that he,(God), is ultimately in control and orchestrates our lives as well as our deaths.

13
Are "Uzziah" and "Azariah" the name of the same king?
4
Does 2 Kings 24:6 suggest that King Jehoiakim died peacefully?
2
In Isaiah 7:3-7 why does the prophet Isaiah promise Judah that Ephraim & Syria will not attack & prevail against it?
2
Why was Necho of Egypt following God's commands?
6
In 2 Chronicles 35:20-22 why did Josiah fight Necho?
4
What was the "book of the law" that Hilkiah found in 2 Kings 22:8?
4
Did Solomon have 40k or 4k horses/stallls?
3
Why was Josiah's younger son made king initially?
4
How did Elijah send a letter to King Jehoram, if Elijah had already been taken to heaven?
1
2 Chronicles 22:2; 2 Chronicles 21:20; was Ahaziah two years when he reigned, or there are two Ahaziahs?