Who was Neri, father of Shealtiel?

So, without going into the question of the divergent lineages (unless you think it is relevant to answer this), who was Neri? Are there any clues anywhere as to who he might have been?

The idea in brief

A recent (2015) work, The First Nativity (Part II): History and Theology of Our Incarnate Lord and Savior by Joseph David Rhodes contains a good discussion of Neri. In short, the hypothesis is that Neri was the biological father of Shealtiel while Jeconiah was his legal father.

The idea is not entirely new (the following image is from The New Testament of Our Lord and Saviour Jesus Christ in the Original Greek published in 1861), but is especially well argued by Rhodes. 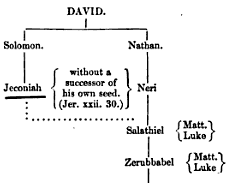 Evidence from I Chronicles

Rhodes suggests that a careful reading of I Chronicles 3:15-20 supports an interpretation that the passage is outlining legal heirs wherever it says "his son", not necessarily biological children. The repetition of the name Zedekiah in v15:

The sons of Josiah: Johanan the firstborn, the second Jehoiakim, the third Zedekiah, the fourth Shallum (ESV)

The descendants of Jehoiakim: Jeconiah his son, Zedekiah his son

Means that Zedekiah was a biological son of Josiah and brother of Jehoiakim. (See also II Chronicles 36:10). He became the legal heir of Jeconiah when

the king of Babylon made Mattaniah, Jehoiachin's [=Jeconiah] uncle, king in his place, and changed his name to Zedekiah. (II Kings 24:17)

and thus is called "his son" here. The right of succession then passed to Shealtiel, who was not a biological son of Jeconiah. Thus making Shealtiel the "son" of Jeconiah.

While we don't know the exact reason for a non-biological heir here, it is an entirely plausible scenario. For example, the law concerning Levirate marriage states:

If brothers dwell together, and one of them dies and has no son, the wife of the dead man shall not be married outside the family to a stranger. Her husband's brother shall go in to her and take her as his wife and perform the duty of a husband's brother to her. 6 And the first son whom she bears shall succeed to the name of his dead brother, that his name may not be blotted out of Israel. (Deuteronomy 25:5, ESV, emphasis added)

That is not to say that what happened here was a Levirate marraige per se. The point is that, in Jewish thought, someone could be considered the child of X without being the biological child of X.

Rhodes' hypothesis would also explain how the curse/prophesy of Jeremiah 22:28-30:

Is this man Coniah [=Jeconiah] a despised, broken pot, a vessel no one cares for? Why are he and his children hurled and cast into a land that they do not know? O land, land, land, hear the word of the LORD! Thus says the LORD: “Write this man down as childless, a man who shall not succeed in his days, for none of his offspring shall succeed in sitting on the throne of David and ruling again in Judah.”

fits in to Jesus' genealogy. If Shealtiel is only the legal successor of Jeconiah and not actual his son, there is no problem with Jesus being the Messiah.

This interpretation also fits with the theory that Luke's genealogy traces the biological lineage of Jesus (either through Mary or the biological parent in Levirate marriages), while Matthew traces His legal lineage.

While we, of course, have no way of verifying whether Neri is the biological father of Shealtiel, it does seem likely that this is what Luke is saying.

Raymond E. Brown says in An Introduction to the New Testament, p131, that Luke's list is less classically monarchical than Matthew's, but there is little likelihood that either is strictly historical. In other words, we should not look for Neri in biblical history, but try to understand why the author of Luke chose to depart from the Old Testament genealogy for Shealtiel.

From a hermeneutic point of view, there is no reason to see Luke's genealogy as that of Mary. The text in Luke 3:23 clearly states, "And Jesus himself began to be about thirty years of age, being (as was supposed) the son of Joseph, which was the son of Heli." Also, no matter whether Luke's genealogy was that of Mary or Joseph, Shealtiel (father of the great Zorobabel) can have only one father - either Neri (Luke) or Jechonias (Matthew). If we accept that the Old Testament (followed by Matthew, with spelling variation) was correct in recording the father of Shealtiel, then Neri was a literary creation and does not exist outside Luke's Gospel.

In the Bible people people were often given names as recognition of their role in the history of Israel. Note the name change of Abram to Abraham.

Neri, perhaps a shortened form of Neriah, means Jehovah my light. Certainly Jehoiachin was not that during the three years of his reign in Jerusalem. But it appears that while in captivity in Babylon he changed. One indication is that he named his first son Sheatiel, meaning asked of God. Did Jehoiachin repent?

In addition his grandson Zerubabbel returned with the early returning exiles and became the governor of Jerusalem. While governor Zerubbabel revealed a godly character, which might reasonably be traced to his family - father and grandfather.

If so, it would be an honor to Jehoiachin, whose name meant established by Jehovah but whose life as king belied that name, to be called God's light as the final epitaph. That is why, I believe, his name is changed.

Not the answer you're looking for? Browse other questions tagged history luke or ask your own question.

15
What was meant by "paradise" when Jesus spoke to the thief on the cross?
12
What does Jesus mean by "vain repetition" or "babbling" in Matthew 6:7?
2
What sort of "slave" is Paul referring to in 1 Corinthians 7:21-23?
22
Why is the genealogy in Luke attributed to Mary?
9
What Was Pilate's Fear Based On?
3
Can differences in the line of Zerubbabel in the genealogies of Jesus in Matthew & Luke be reconciled with each other and with 1 Chronicles 3:17-24?
0
Who were "them" in Luke 23:34 when Jesus forgave "them" on the Cross?
9
Who is my neighbor?
1
Did Saul believe that the spirit of Samuel was in Sheol?