Why were 'The Edomites' in Jerusalem, when the city fell to the 'Babylonians.'?

Remember ,O Lord,what the Edomites did

on the day Jerusalem fell.

"Tear it down", they cried,

"tear it down to its foundations!"

What is the reason for the Edomites being in Jerusalem at this time?

Were they invited in by the Jews, when the City was at peace,? or were they a part of the Babylonian war machine.?

A helpful previous answer (n.b.: literature cited there is not repeated in this answer) hints at some of the complexities of this interesting question. Answering it definitively is complicated by our lack of "Edomite" sources and limited archaeological evidence. (And n.b.: the answer that follows is not "definitive"!) Although there is some evidence from the Babylonian side, it doesn't speak to this precise issue (that is, the involvement of the Edomites in the destruction of Jerusalem in 586 BCE isn't directly part of the Babylonian record).

Judah and Edom were close neighbours, and their geographical relationship has significance for the latter part of this answer: 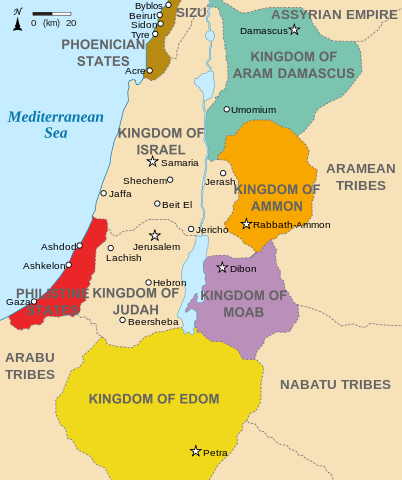 Most of the evidence comes from the Hebrew Bible, which itself requires some explaining (as OP's question implies). The reading that emerges below suggests that the Edomites were not in Jerusalem at its fall to the Babylonians in 586 BCE.

In political terms, however, it is really with the monarchy of David that the deep-seated hostility between the two national entities is established, and that mostly from the actions of the imperialist conquest of David himself:

2 Samuel 8:13 And David made a name for himself when he returned from striking down 18,000 Edomites in the Valley of Salt.

This was recalled later, at the accession of an Edomite prince in the time of Solomon:

1 Kings 11:14 And the LORD raised up an adversary against Solomon, Hadad the Edomite. He was of the royal house in Edom. 15 For when David was in Edom, and Joab the commander of the army went up to bury the slain, he struck down every male in Edom 16 (for Joab and all Israel remained there six months, until he had cut off every male in Edom).

(This event was also later recalled in the superscription to Psalm 60.)

Although there seem to have been moments of co-operation between Edom and Judah (see 2 Kings 3:9), this hostility marked relations, at least until Edom reasserted itself against its northerly neighbour in the mid-800s BCE:

Note, this is still over ~250 years before the Babylonian destruction of Jerusalem. During the intervening years there is nothing of especial note bearing on our enquiry.1 If anything, the characterization of Israel and Edom as "brothers" in Amos 1:11 suggestions some thaw in relations from the earlier hostilities.

The Fall of Jerusalem

The events in the decades leading up to the fall of Jerusalem in 586 are very complex. Think of some of the geo-political trouble spots in the news today, and the complicated alignments, shifts, national and ethnic tensions ... it was that sort of thing in the Babylonian period in the "Levant" (the eastern end of the Mediterranean). The nations named on the map, above, were all affected by the imperial aspirations of the Mesopotamian (and, to complicate things further, Egyptian) powers.

The important factor for our considerations is that the only evidence we have available for the Edomite involvement in the Babylonian destruction of Jerusalem comes from the Bible. And, as a number of careful scholars have noted, what these texts depict is an attitude taken by the Edomites, rather than any action which would see them participating in the seige and its aftermath.2

Probably the book of Lamentations is where we get the closest to "eye-witness" reaction and here there is no activity attributed to Edom at all:

Bartlett (see note 2, below) places some weight on the report in the book of Jeremiah that at this same moment, Edom appears to be giving sanctuary to Judaean refugees:

Jeremiah 40:11 Likewise, when all the Judeans who were in Moab and among the Ammonites and in Edom and in other lands heard that the king of Babylon had left a remnant in Judah and had appointed Gedaliah the son of Ahikam, son of Shaphan, as governor over them, 12 then all the Judeans returned from all the places to which they had been driven and came to the land of Judah,...

Jeremiah's younger contemporary in Babylon, Ezekiel, also reports Edomite excesses, in 25:12 and 35:15. But these, too are either not time bound (there's no way to connect them with the Babylonian destruction of Jerusalem), or speak again of attitude ("you rejoiced over ... Israel, because it was desolate", 35:15) rather than any concrete action.

There is also the little book of Obadiah to take into account:

Obadiah v. 1 The vision of Obadiah. Thus says the Lord GOD concerning Edom: We have heard a report from the LORD, and a messenger has been sent among the nations: "Rise up! Let us rise against her for battle!" ...
10 Because of the violence done to your brother Jacob, shame shall cover you, and you shall be cut off forever. 11 On the day that you stood aloof, on the day that strangers carried off his wealth and foreigners entered his gates and cast lots for Jerusalem, you were like one of them.

This seems to me to make it clear that Edom was not among the strangers and foreigners... Edom is clearly accused of doing nothing to help Jerusalem in her time of need.

In other words, on this reading, Edom was simply passive while Babylon dismantled Jerusalem and deported many of its inhabitants as exiles.

Two final matters. First, it is important to take note of what is available from the Babylonian side -- which sadly isn't much. However, such basic studies as Wiseman's expert work on "Nebuchadrezzar" [sic] should be consulted.3 He gives a careful account (from the Babylonian side) of Nebuchadnezzar's "western campaign" which is the context for these events, including a nuanced and considered assessment of the biblical data.

Second, the aftermath of these events may well have played its part in shaping the later phase of the biblical record. It is clear, for example, that Edomites had already settled in the southern regions of Judah, but in the decades following the fall of Judah, the Edomite settlement increased. By the Hellenistic period the former south of Judah was known as "Idumea", the classical term for Edom, and the birthplace even later of Herod the Great (which contributed to the Jewish disdain for that Roman client king).

Elie Assis has called for a re-assessment of Edom's involvement in the fall of Jerusalem (see note 2, below): if Edom was not involved, then why the later hostility to it? Possibly the incursions of settlers contributed, although his own suggestion goes back to the pre-history of Jacob and Esau/Edom: at a time when Judah's election felt vulnerable, the "brother" (Edom) needed to be rejected more forcefully than ever.

Whatever the value of Assis's suggestion (and it there is more to it than my extremely brief mention can convey, of course), it seems the case that scholars are less inclined to see Edom as part of the Babylonian war-machine than they once were.4

Update: Anyone finding this topic of interest, and who can read Spanish or is happy to use Google Translate, an interesting and well-illustrated interview has just been posted with Juan Manuel Tebes who has done a lot of work on Edom on the Edomites in recent years: "Entrevista con J.M. Tebes: 'el yahvismo le debe a las zonas meridionales mucho más de lo que se cree'" (2014.02.28) / = "Interview with J.M. Tebes: 'Yahwism owes a lot more than you think to the southern regions'."

Credit: All biblical citations taken from the ESV.

According to information presented in the Bible History Online web page The Destruction of the Southern Kingdom of Judah, the Edomites had joined the Babylonians, so suggesting that they were part of the Babylonian war machine.

According to that website, there is another Bible passage that links in:

For again the Edomites had come and smitten Judah, and carried away captives.

and from the web page's authors:

On the conquest of Judah, the Edomites, probably in reward for their services during the war, were permitted to settle in southern Israel and the whole plateau between it and Egypt.

Historical and archaeological evidence presented in the paper “You shall not Abhor an Edomite, for he is your brother" The tradition of Esau and the Edomite Genealogies from an anthropological perspective (Tebes), suggest that The Edomites may have not fought alongside the Babylonians, but may have profited from the destruction of Jerusalem, and their mention as part of the war machine was borne out of longstanding anti-Edomite standpoint.

The anti-Edomite stance is further discussed in the book "Jeremiah: An Archaeological Companion" (King, page 47), where it is stated that the people of Judah held a deep resentment for the Edomites for not coming to their aid during the Babylonian siege and that archaeological evidence dissociates the Edomites from actually being directly involved in the destruction of Jerusalem (Bartlett, 1989).

Not the answer you're looking for? Browse other questions tagged psalms jerusalem or ask your own question.