In Matthew 18:34, what does the Greek word βασανισταῖς (“torturers”) mean?

At the end of the parable of the unmerciful servant, the master has him jailed and handed over to be tortured:

34 And his lord, moved with anger, handed him over to the torturers until he should repay all that was owed him. NASB, 1996

I find this disturbing, as these are Christ’s own words. What exactly is meant by the word βασανισταῖς (translated “torturers”) in this specific passage? I have studied social reactions to torture over the centuries and realize that it has a much broader definition than during Christ’s time, so I actually find it terribly ambiguous. What is the original word used in our oldest manuscripts and how has that word been traditionally used?

This may be related to another question about the parable that is the context for this question on Matthew 18:34 in particular.

OP: What is the original word used in our oldest manuscripts and how has that word been traditionally used?

The word used here for "torturers" is τοῖς βασανισταῖς or, in its lexical form, βασανιστής (basanistēs). There are no textual variants in the manuscript tradition affecting this word/reading (if that is what lies behind the question about "oldest manuscripts").

As you will see from the Liddell-Scott-Jones lexion entry linked, it has a reasonably wide range meaning, from one who "examines by close questioning" (so, "interrogator", I suppose) through to outright "torturer".

The word has a history, of course.2 It was used of inspection of coins, and this meaning co-existed alongside being "tormented" by disease, through to the more harrowing kind of testing that involves the rack, and so on.

OP: What exactly is meant by this word "torture" in this specific passage?

It looks like it means what it says: the unmerciful servant is being "tormented" as a result of his lack of forgiving-ness. Schneider (see note 2, p. 563) simply states that it means "tormenter" rather than "tester" without further discussion - presumably because that more benign meaning would make no sense in the context of the parable.

Donald Hagner has some useful comment on this verse:3

Torturers, though disallowed by Jews, were common in Roman prisons; in the case of unpaid debt, friends and relations would have accordingly been more urgent in raising money. Given the enormity of the debt, the imprisonment would have been permanent.This together with the reference to the torturers may hint (cf. v 35) at eschatological punishment.

And, of course, it needs to be remembered that Jesus is drawing this word-picture in a parable.

OP: I find this disturbing, as these are Christ's own words.

Jesus is recorded in the gospels as saying many disturbing things, and it seems especially so in some of Luke's parables. Compare this to, e.g. Luke 12:47 on hearing and not doing, or Luke 19:27 when the king slaughters those who rejected him, or Luke 20:16 on the tenants in the vineyard. Jesus not so gentle, meek, and mild.

Then being enraged, his lord surrendered him to the tormentors, until such time as he should repay the entire debt. 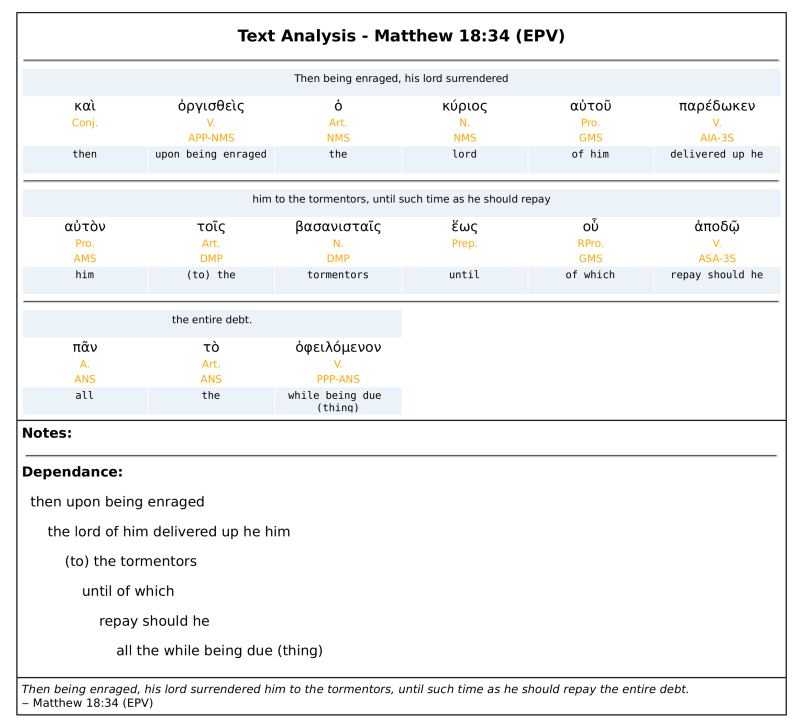 In this parable, the king is a merciful man who responds to the pleas of his servant by forgiving him his debt. He is contrasted with the same, who, even though shown mercy, responded to the pleas of a fellow servant by throwing him into prison until the debt was repaid. How he imagined the man being able to repay the debt while incarcerated, is anyone's guess.

No, the king didn't have prison in mind for this fellow, or the rack or thumb screws or hot irons, only what he had said he would do in the first place:

But forasmuch as he had not to pay, his lord commanded him to be sold, and his wife, and children, and all that he had, and payment to be made.
-- Matthew 18:25 KJV

Here are the tormentors!

Debt collection has been around as long as there has been debt and goes back to the ancient civilisations, starting in Sumer in 3000 BC. In these civilisations if a debt was owed that could not be paid back, the debtor and his wife, children or servants were forced into "debt slavery", until the creditor recouped losses via their physical labour.
-- Debt Collection Wikipedia

The king in the parable had the wicked servant delivered to a place that specialized in enforced labour. Such agencies were as merciless as the wicked servant, and would have given the man first hand experience of what it was like in a world surrounded by people like himself.

βασανισταῖς could be used to describe any agents whose hearts are not inclined towards mercy, precisely as the wicked servant had shown himself to be.

The English term "the torturers" in the NASB seems to be a mistranslation of the Greek ΤΟΙCΒΑCΑΝΙΣΤΑΙC (τοις βασανισταις) seen in codex Sinaiticus (c. 375-425 CE) and the earlier codex Vaticanus (c. 325-375 CE).

According to the NASB, the man was handed over to a person(s) who inflict severe physical pain as a means of either punishment or coercion. However, βασανισταις may be better understood in English as inquisitors or tormentors (cp., e.g., Strong's G930; Moulton's Analytical Greek Lexicon--Revised at βασανιστης; Mounce's Expository Dictionary #991, "a keeper of a prison, jailer").

If you've ever been tormented by numerous telephone calls or letters from bill collectors, then you might have a better idea of what ΤΟΙCΒΑCΑΝΙΣΤΑΙC (τοις βασανισταις, "the tormentors" in KJV) likely meant to Jesus.

Not the answer you're looking for? Browse other questions tagged matthew historical-interpretation word-study or ask your own question.

12
Meaning of the Parable of the Sower
4
How did a prisoner pay back debt?
3
Was the Unmerciful Servant literally expected to pay back his debt via torture and if so how?