How can the 3 Questions be resolved with the math still correct?

Analyzing Noah and the Great Flood story, there appear to be 3 math problems, each with its own set of factors and calculations, that aren’t easy to resolve.

First is the “2 years after the flood” problem; in combining three specific verses and checking the math there end ups being a 2 year difference to explain.

Q#1: How could Shem have become a father 2 years after the flood?

Second, it’s hard to determine if Shem’s son Arphaxad was born on the ark or not. This leaves another difference to resolve.

Finally, starting with additional factors from the end of Noah’s life and moving backwards there’s yet a third problem to resolve. It doesn't seem Noah could have lived as long as he did yet be only 500 years older than Shem.

Gen 7:11 In the 600th year of Noah's life, in the 2nd month, on the 17th day of the month, the same day were all the fountains for the great deep broken up, and the windows of heaven opened. (KJV)

Summary Question: How can the 3 questions/problems above be resolved with the math still correct?

These 3 enigmas or problems can only be solved if fatherhood and childhood (life) are calculated from conception forward. Otherwise the math won't work.

The 3 problems above require certain information in order to reach 2 key facts. Then the math issues can be resolved.

The information for these makes the answers unquestionable.

Clearly only Noah, his wife, his 3 sons and his sons’ wives entered and left the ark.

Entering the ark (per the KJV):

Gen 6:18 But with thee will I establish my covenant; and thou shalt come into the ark, thou, and thy sons, and thy wife, and thy sons' wives with thee.

Gen 7:6-7 And Noah was six hundred years old when the flood of waters was upon the earth. And Noah went in, and his sons, and his wife, and his sons' wives with him, into the ark, because of the waters of the flood.

Gen 7:13 In the selfsame day entered Noah, and Shem, and Ham, and Japheth, the sons of Noah, and Noah's wife, and the three wives of his sons with them, into the ark.

Gen 8:18-19 And Noah went forth, and his sons, and his wife, and his sons' wives with him: Every beast, every creeping thing, and every fowl, and whatsoever creepeth upon the earth, after their kinds, went forth out of the ark.

Gen 9:1 And God blessed Noah and his sons, and said unto them, Be fruitful, and multiply, and replenish the earth.

Gen 9:8-9 And God spake unto Noah, and to his sons with him, saying, And I, behold, I establish my covenant with you, and with your seed after you;

The span of time between when the floodgates were opened and the earth was again dry (or Noah and his adult relatives could have left the ark) was more than 1 year. Therefore everyone’s age went up. 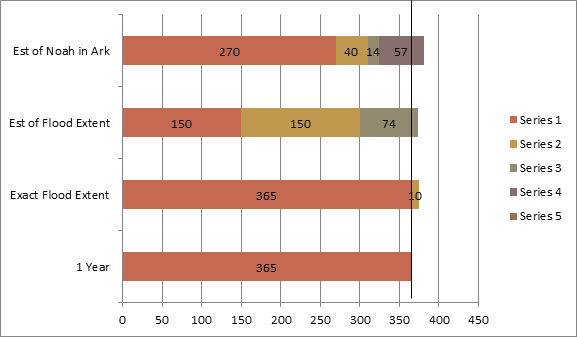 Theologians such as Professor Gerhard von Rad and Jeremy Hughes haven’t been able to explain the issues; they focused on the 2 year flood problem.

“There is an inconsistency between the data in Ch. 5-32 and Ch. 7-11 on the one hand and Ch. 11.10 on the other which has not yet been satisfactorily solved, if one decides against simply deleting the words “two years after the flood”, for at this time Shem was not 100 years old, but 102.”

Jeremy Hughes per his Secrets of the Times:

“And the only way out of this dilemma that I can see is to suppose that this 2 year interval is actually a chronological correction made after 2 years had fallen out of antediluvian chronology through some process of textual corruption when it was noticed that the remaining figures no longer added up to the correct totals required by Priestly tradition.”

We’ve been misinterpreting the wording of these problems and therefore finding our math incorrect. In every case, the Genesis authors are telling us that "years old" (KJV) and "years old"/"age"/“lifetime” (NAV) begin at birth. However, they're also saying, mathematically, that parenthood and childhood/"life" can only begin at conception. Thinking in that way the math gets resolved; otherwise it does not. The best example for showing this is the most difficult problem, the "2 years after the flood":

Note: Calculations below use 30 days in a month, 9 months of time between conception and birth, and “age” meaning “years old”.

Gen 7:11 In the 600th year of Noah's life, in the 2nd month, the 17th day of the month, the same day were all the fountains of the great deep broken up, and the windows of heaven were opened. (KJV)

2 years later, and in terms of years only, Shem could have been 100 years old and able to begat his son, with the math correct and no child having left the ark. Only this works.

Two stories, one from Luke and the other from Genesis, show children alive in mothers' wombs.

In summary, the two stories’ words show children’s action/life in mothers’ wombs. The Genesis authors, in using the numbers/ages, take the assumption that parenthood and childhood/"life" begin at conception and reveal it to be a fact.

Below are charts to help visually facilitate understanding of this enigma in exploration of various solutions:

One difficulty that must be addressed is that Genesis 7:6 says, "Noah was six hundred years old when the floodwaters were on the earth." If this is taken chronologically then the phrase in the 600th year of Noah's life cannot refer to the year prior, but must refer to the year following his 600th birthday.

-This chart depicts the days/months given in the flood account as those of the calendar year (not of Noah's life).
-This chart is based on the traditional understanding with years old and years of life synonymous and calculated from birth.
-This chart sees "in the 600th year of Noah's life" = on or before Noah's 600th birthday. But avoids disrupting the chronology as follows: The only one day on which Noah would be both 600 and in his 600th year of life would be his 600th birthday. Thus the flood would have begun on his 600th birthday, in the 2nd month of the calendar year. 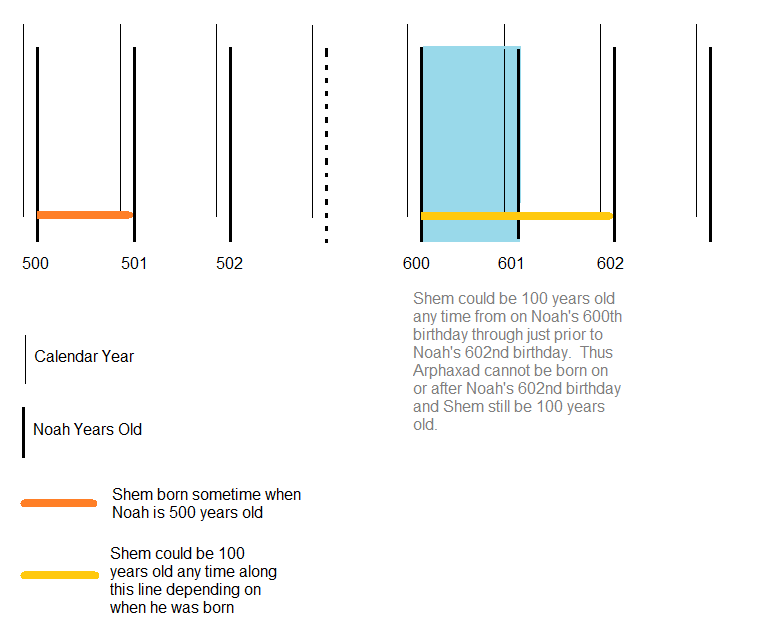 The difficulty here is that, in order for Arphaxad to be born two years after the flood he would have to be born on or after Noah's 602nd birthday which falls outside of the range in which Shem could have been 100years old based on the dates given for Shem's birth.

-This chart views Genesis 7:6 as not chronological account. It sees in the 600th year of Noah's life, as the year before his 600th birthday (like a child is in their first year during the year prior to their first birthday).
-This depicts days/months given in the flood account as of Noah's life (rather than of the calendar year).
-This chart is based on the traditional view that years old and years of life are synonymous and are calculated from birth. 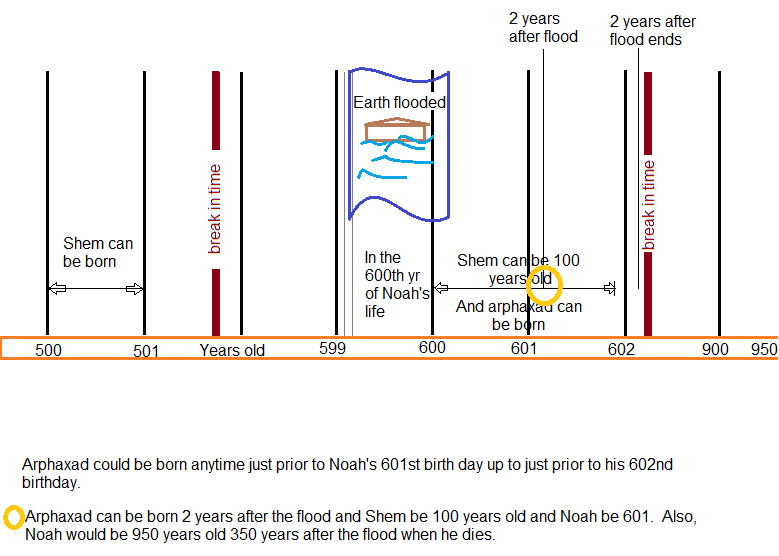 Thus, Arphaxad could be born at any time between Noah's 600th and 602nd birthday Thus, two years after the flood begins falls in the time frame in which Aprhaxad could be born! (See the yellow circle where the two lines intersect.)

This works, but the "Chronology is disrupted" However, it is worth noting that if Genesis 7:6 were chronological then the floodwaters would be on the earth before Noah and his family are on the ark as depticted by the verses following (Gen 7:7-9).

This chart works except the chronology of Gen 7:6 and 7:11 is disrupted same as in chart 2.

Noah was six hundred years old when the floodwaters were on the earth. So Noah, with his sons, his wife, and his sons' wives, went into the ark because of the waters of the flood. Of clean animals, of animals that are unclean, of birds, and of everything that creeps on the earth, two by two they went into the ark to Noah, male and female, as God had commanded Noah. And it came to pass after seven days that the waters of the flood were on the earth. In the six hundredth year of Noah's life, in the second month, the seventeenth day of the month, on that day all the fountains of the great deep were broken up, and the windows of heaven were opened. And the rain was on the earth forty days and forty nights.

-This chart is from fdb's perspective/explanation.
-In 600th year of life = the year before turning 600 years old
-day and month = of the calendar year 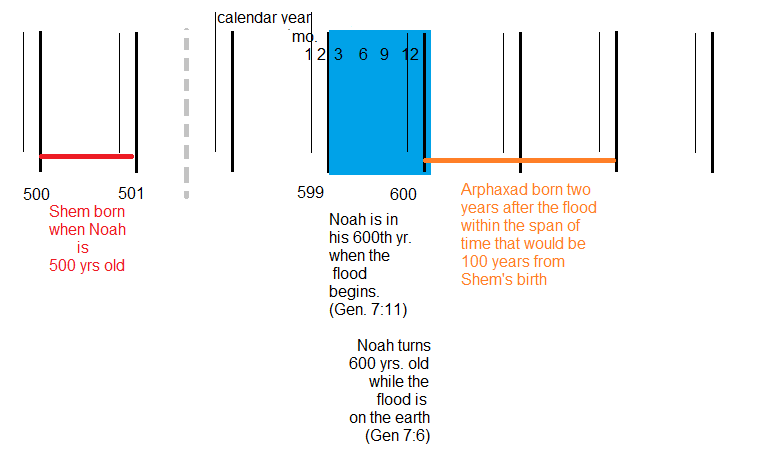 If you look at the exact wording it is all very simple.

Gen 5:32 says that Noah begat Shem, Ham and Japheth at the age of 500 years (Hebrew: “the son of 500 years“). If he begat three sons in the same year he must have had at least two wives at that time, but let us leave that out of consideration. Let us assume that Noah was born on the first day of the year and that he begat Shem on his 500th birthday. Shem would then have been born when Noah was 500 years and 9 months old.

Gen 7:11 says that the flood began “in Noah’s 600th year” - that means: in the year ending with his 600th birthday, when he was 599 - month 2, day 17. This is about 7 months before Shem’s 99th birthday (still assuming that Noah begat him on his 500th birthday). So at the beginning of the flood Shem was 98 years old. This means that on the first anniversary of the beginning of the flood Shem was 99, and on the second anniversary he was 100. This is consistent with the statement in Gen 11:10 that Shem was “the son of 100 years” two years after the flood.

Not the answer you're looking for? Browse other questions tagged genesis authorial-intent noah mathematics or ask your own question.

14
Was or wasn’t Shem’s son Arphaxad born on the ark?
15
How can we determine the author's intent in listing various ages in Genesis?
25
Why is Genesis careful to record the exact dates of the flood?
7
Joseph dies at about 110
9
Why does Pharaoh ask Jacob his age?
6
Calculation of date from Genesis 7:11
5
Does Genesis 7:6 chronologically follow Genesis 7:11?
5
Why is Sarah the only woman with an age mentioned in Genesis?
3
Was Methuselah literally 969 years old when he died?