Frank Garlock says in his The Language of Music that 2 Samuel 6:14:

Enthusiasts of contemporary Christian music and Christian Rock sometimes cite the Old Testament scripture where David led the people in a dance. A close examination of the passage should warn any against taking too much out of this scripture. David simply beat time with his feet!

I have found that the Hebrew word used for "dancing" in:

2 Samuel 6:14 (NASB)
And David was dancing before the LORD with all his might, and David was wearing a linen ephod.

In addition, in Gesenius' Hebrew-Chaldee Lexicon: 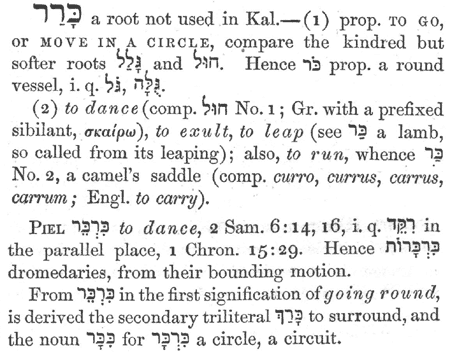 For now, I have not found anything that matches what Frank Garlock says: "beat time with his feet". What is the correct meaning?

I am no dancer, but I don't believe the context can support Mr. Garlock's interpretation:

The word in question (karar), is defined by BDB as "to whirl, to dance". However, since the word is only used twice (here and in v. 16), we shouldn't place too much confidence in the lexical precision. Rather, it is the context that clarifies what was going on.

In the first place (as DJClayworth astutely pointed out), the adverbial modifier "with all his might" suggests at the very least that this is an extremely expressive activity, utilizing all of David's extremeties, not merely his feet.

Secondly, verse 16 sheds even more light, combining karar with pazaz ("agile leaping"), lending further evidence that this was a full-bodied expression of celebration. In fact, it was exactly this uninhibited display that David's wife Michal "despised in her heart". Moreover, as your Gesenius source pointed out, the same word in the parallel passage (1 Chron 15:29), is exchanged with the word "raqad" ("jumping"), a word which is often used in Scripture to describe the excited skipping of young calves and goats.

But most crucially, it is precisely the undignified nature of David's display that serves as the central theme of his conversation with Michal (v. 20-22). She ridicules him for his "shameless" behavior (attacking his exuberant joy, just as the enemy of our souls attacks it in us), but David silences her, boldly maintaining that the Lord's magnamimous grace sometimes requires extravagant -- even "undignified" -- outbursts of emotion.

So, Mr. Garlock can keep tapping his feet if he feels so inclined, but I suspect in heaven he may well be "jumping and leaping and praising God." (Ac 3:8)

6
Is Michal's childlessness a consequence of her criticism to David's dance (2 Samuel 6:23)?
2
What is the significance of Abijah including a covenant of salt with David and his sons?
4
In Isaiah 6:2 whose face and feet are the Seraphim covering with their wings?
19
In 2 Samuel 11:4, what does it mean by "David slept with Bathsheba because she was pure"?
2
Was David serious about dying himself instead of his son Absalom in 2 Samuel 18:33?
0
How did Amasa wallow in his blood after he died in 2 Samuel 20:12?
5
How should עֹ֥ז be translated in Psalm 8:3?
5
How do we reconcile 2 Samuel 5:6-8 with 2 Sam. 9:11-13? Did David really hate the blind and the lame?