Natural disaster at Sodom and Gomorrah in Genesis 19:24?

Then the LORD rained upon Sodom and upon Gomorrah brimstone and fire from the LORD out of heaven;

Does this passage suggest that the cities of Sodom and Gomorrah were struck by a natural disaster such as a volcanic eruption?

Some eruptive clouds are quite impressive, such as this recent Chilean eruption, image below: 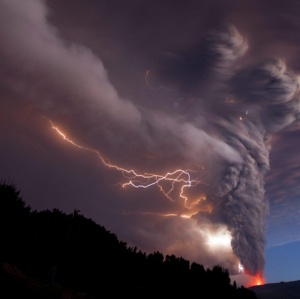 What archaeological evidence is there that this type of disaster is similar to what was witnessed in the Genesis passage?

The text itself does not give enough information to deduce whether a volcanic eruption occurred or just a miraculous event (the literal interpretation), but commentators have long noted the similarity of this language with that of other volcano legends in early Semitic literature.

The scene is one of divine retribution. Brimstone appears here and elsewhere as an agent of purification and divine wrath upon the wicked (Ps 11:6; Ezek 38:22). The natural deposits of bitumen and the sulfurous smell attached to some areas around the Dead Sea combine to provide a lasting memory of Sodom and Gomorrah’s destruction. One can only speculate about the actual manner of this destruction, but perhaps the combustion of natural tars and sulfur deposits and the release of noxious gases during an earthquake are a part of the story (Deut 29:23).

It is also notable to observe that in Genesis 19:26 where Lot's wife becomes a 'pillar of salt,' the IVP Commentary explains,

The story of the punishment of Lot’s wife is often illustrated by some grotesquely humanlike, salt-encrusted objects that have become landmarks in the Dead Sea area (alluded to in the apocryphal Wisdom of Solomon 10:4). This phenomenon is a result of the salt spray that blows off the Dead Sea. Huge salt nodules still appear in the shallow sections of the lake. The mineral salts of the region include sodium, potash, magnesium, calcium chlorides and bromide. An earthquake in the area could easily have ignited these chemicals, causing them to rain down on the victims of the destruction.

In the article "Where Is Sodom?" in the March/April 2013 issue of Biblical Archaeology Review, archaeologist Steven Collins uses clues from Biblical geography and archaeological evidence from the site of Tall el-Hammam in Jordan to suggest that the author of Genesis 13 located Sodom in a fertile area northeast of the Dead Sea (which would be the same Sodom referenced in Genesis 19).

According to another article discussing Collins' article,

Seeking to answer the question “Where is Sodom?” and using the Biblical geography of Genesis 13 as a guide, Collins decided to excavate Tall el-Hammam, an extensive and heavily fortified site located in modern Jordan at the eastern edge of the kikkar. First inhabited during the Chalcolithic period (4600–3600 B.C.E.), the site attained its maximum size during the Middle Bronze Age (c. 2000–1600 B.C.E.) and became one of the largest cities in Canaan. But unlike other Canaanite cities that continued to flourish in the Late Bronze Age (1550-1200 B.C.E.), Tall el-Hammam was destroyed by fire at the end of the Middle Bronze Age and remained uninhabited for centuries....

Across Tall el-Hammam, archaeologists found widespread evidence of an intense conflagration that left the Middle Bronze Age city in ruins. They found scorched foundations and floors buried under nearly 3 feet of dark grey ash, as well as dozens of pottery sherds covered with a frothy, “melted” surface; the glassy appearance indicates that they were briefly exposed to temperatures well in excess of 2,000 degrees Fahrenheit, the approximate heat of volcanic magma. Such evidence suggests the city and its environs were catastrophically destroyed in a sudden and extreme conflagration.

If the site of Tall el-Hammam really was the city of Sodom referenced in Genesis 13 and 19 (and that if is a significant caveat), then yes, it is plausible that at least the city of Sodom was wiped out in a volcanic eruption, likely one caused by tectonic activity.

However, there are other proposed sites for these cities, and there is not yet enough evidence to indicate that the Biblical cities have indeed been properly identified by archaeologists.

The words that are used in LXX for what becomes "brimstone and fire" in the English translation are θεῖον[1] and πυρ[2]. Interesting enough they both etymologically connect to the root/meaning of pure. Pure/fire being clearly phonetically connected to πυρ and θεῖον being a synonym (though may be having a distinct meaning like e.g. watch and clock).

This water related (rain/draining) interpretation connects the two sentences 24-25 into a coherent story. In absent of factual knowledge about the events it is certainly a valid argument for choosing these meanings from many other options often found in the dictionary articles.

So does this passage suggest that the cities of Sodom and Gomorrah were struck by a natural disaster such as a volcanic eruption? - I think it may not be the a volcanic eruption in a sense that magma or ashes just completely flooded and covered the city and stayed there so it became inaccessible.

So let us note that in 19:28 Abraham sees some fire coming up from the earth like an evaporation/smoke of an oven and search a little further.

When Isaiah in 4:4 talks about cleansing the sons and daughters of Sion he refers to the spirit of judgement and the spirit of burning, so those left will be called clean ἅγιος[5]. Some commentators point to the Isaiah 4:4 as the source for the Mt 3:11 (my rough translation):

Then in Mt 3:12 John in another parabola talks about cleaning and then burning in πυρί ἀσβέστῳ[6] that is translated as inextinguishable fire. Interesting enough ἀσβέστῳ is used in Russian (негашеная известь)[7] to refer to the caustic unslaked lime aka quicklime aka Calcium Oxide CaO[8] that comes from limestone СаCО3 when it's heated.

The unslaked lime caught fire easily ... and was used to make an early, high-intensity lamp for the stage – the original limelight. ... It also made a rather fearsome weapon, as it could sear the skin and blind the eyes. ... unslaked lime was also shoveled into graves to decompose bodies more quickly [8]

Now if we put all these facts together, we may have an explanation: It may be some event where the limestone got heated (maybe indeed because of a volcano eruption or some other geothermal source) and brought upon Sodom and Gomorrah following by a rain. It may have ignited first burning the city and the earth and what haven't burned then turned into the caustic unslaked lime because of the falling rain and so it corroded/cleansed the rest. The action of the unslaked lime on the corpses is said to be rather disinfecting and inhibiting putrification than the destruction of corpses.

Thus we have cleaning via rain, fire and corrosion (inextinguishable fire). The fire that Abraham saw in 19:28 was the limelight. What happened to the Lot's wife in 19:26? Maybe she was blinded to death or paralyzed from the same limelight.

To me this looks like an explanation worth considering due to the so many linguistic and chemical/physical connections that give it credibility.

P.S. As a less convincing hypothesis re: Lot's wife in 19:26 - the burning of limestone was done in kilns that may look like a column of salt[8]. Some of those may have been found in that area. I don't think though it is what was meant in that sentence.

grammaplowgrammaplow
122 bronze badges
New contributor
grammaplow is a new contributor to this site. Take care in asking for clarification, commenting, and answering. Check out our Code of Conduct.
Add a comment  |