I know that the word usually means the bearer of (good) tidings, but why is it in its feminine form ? (some translations translate it as women, ESV "the women who announce the news", while others discard the gender, KJV "the company of those that published it").

First off -- what an amazing psalm! I think it's important never to forget the greatness of the literature we're digging into when we (rightly!) ask our carefully focussed and technical questions. When we've arrived at our answer (if we can), our appreciation ought to be enhanced and deepened.

And sorry: I meant this to be a quick one.

Three questions here, but I will take then in reverse order, so as to (1) observe context (= "More generally, what is the meaning of Psalm 68:11-13?), (2) for the key term in the question, what force does its grammatical gender have, and then finally (3)...

(These are verses 12-14 in Hebrew; I'll try to keep clear which enumeration I'm using as we move along.) Be warned that Marvin Tate says of these verses: "This section is plagued with translation difficulties and uncertain meanings" (Psalms 51-100, [Word Biblical Commentary 20; Dallas: Word, 1990], p. 178).

Most broadly, the psalm as a whole is a hymn in praise of the victory of the Divine Warrior (i.e., God - here, in the context of the Elohistic Psalter, we don't expect to see the Divine Name, but it does occur in English vv. 16, 20, and 26). Various aspects of his victory are celebrated, mostly over the nations, although the natural and cosmic realms react to God's victories in various ways.

In vv. 11-13, we have one vignette of this wider movement. The bit that seems most obscure (to me, at any rate), is the "dove" language -- otherwise we are clearly in the joyous phase of revelling in taking plunder from the vanquished enemy. Commentators (like Tate, cited above, or Hans Joachim Kraus, to name but two) associate the "dove" with Astarte who is symbolized by a dove (and compare the "dove" language in Song of Songs).

Others take this in terms of the imagery seen over millenia of the "dove" (here) with wings spread in victory, giving rise much later to the "Winged Victory" (from which the Nike symbol ultimately derives, btw): 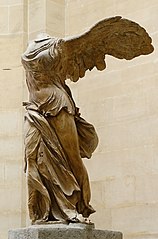 But see also Psalm 74:19 where "dove" symbolizes God's people (so Tate). As ever, in these obscure, allusive texts, it is difficult (even foolish) to be dogmatic about precise meanings, and all we can do is inform ourselves about the possiblities, and test them against context and other relevant data. Interpreters will, however, weigh the evidence and arguments differently, so final agreement is often impossible.

We probably have sufficient "clarity" (ahem), though, to move on.

So, our term in Ps 68:11 (= v 12 in Tanak) = (ha)mĕbaśśĕrôt = grammatical description: piel participle feminine plural + definite article in context. How is it best understood?

First, what other בשׂר Piel participles are there for comparison/illumination of this occurrence? It turns out there are 8 verses with 10 occurrences:

All have masculine singular participles except:

Isaiah is the closest comparator, and is also a proclamation of good news. The older commentators were inclined to see this as a man's job, and possibly this "herald" should be seen as the prophet himself. More recently, this figure is taken as (feminine) representation (personification?) of Jerusalem/Zion.1

That is already a clue, however, that a fem. ptc. does not always have woman/women as referent(s). The best known example is that of Qohelet = Ecclesiastes = "the Preacher" (see the bottom half of that page)2 or the like (no one takes as woman). The grammars explain this variously, but chiefly ... it simply appears to be a quirk of the (once living) language.

A very small number [of singular masculine nouns] have a feminine ending, e.g. קֹהֶלֶת man of an assembly. Here the feminine ending has an intensive nuance, just as it has in [some] Arabic forms...

One can now see why there are two possibilities, as noted in the original question. Putting the above evidence together, the options are -- to my mind -- fairly finely balanced.

Perhaps the most "natural" reading would be to see these mĕbaśśĕrôt as the women who celebrate the victory - see further in Ps 68:24-26 (English) where the victory procession includes dancing girls, declaring God's praise. This is also reminiscent of the celebrations of David's victories which so irked Saul (1 Sam 18:7-8).

On the other hand, the Isaiah 40:9 reference does have some bearing on our further investigation, and the matter more broadly of how certain grammatically feminine nouns refer to men. Giving more weight to this observation would incline us to include these "heralds" in Ps 68 with the singular "herald" of Isaiah 40, performing a more specialist (and male) function of public announcement, rather that simply singing with joy in praise of the victory.

However, if the more recent commentators on Isaiah are followed, then the "herald" is a feminine figure, though here again this is a judgment call.

Toss a coin? Or is there some further evidence which might tip the balance one way or the other?

The "mevasrot" in Psalm 68:11 are the heraldresses of victory. The parallel word is the "nawat bayit", the housewive(s) who divides the spoils, in verse 12.

My translation of verse 11:

The Lord makes His statement, proclaimed by an army of heraldresses

Then Miriam the prophetess, the sister of Aaron, took a tambourine in her hand, and all the women went out after her with tambourines and dancing.

And Miriam sang to them:

“Sing to the Lord, for he has triumphed gloriously; the horse and his rider he has thrown into the sea.”

Other examples of the heraldresses of victory are the Song of Deborah in Judges 5 (ESV), that starts:

Then sang Deborah and Barak the son of Abinoam on that day:

“That the leaders took the lead in Israel,

that the people offered themselves willingly,

As they were coming home, when David returned from striking down the Philistine, the women came out of all the cities of Israel, singing and dancing, to meet King Saul, with tambourines, with songs of joy, and with musical instruments.

And the women sang to one another as they celebrated, “Saul has struck down his thousands, and David his ten thousands.”

The paraphrase of the section 11-14 (MT 12-15) is subject to speculation despite each word being clear. My interpretation is that victory over a multitude of enemy kings who are scattered like snowflakes (14) is delivered by means of God's statement or by word alone (11), and not by the efforts of the army who may as well be sleeping (13a) and despite being asleep are assured a victory as swift and assured as a golden-winged dove (13b). Compare with Leviticus 26:8 (ESV):

clogging their chariot wheels so that they drove heavily. And the Egyptians said, “Let us flee from before Israel, for the LORD fights for them against the Egyptians.”

Not the answer you're looking for? Browse other questions tagged hebrew psalms or ask your own question.

5
Have the "many" in Psalm 4 received blessings or were they already blessed?
5
Can "יָתוֹם" designate someone who has lost his father but not his mother?
12
Why are Hebrew verbs in the "perfect" form so often translated as present tense in modern translations?
7
Did Moses write Psalm 90?
7
The meaning and reference to מוג in Amos 9:13 related to that of Amos 9:5
4
Who is harmed in Psalm 15:4?
8
"Some trust in chariots..." in Psalm 20:8
3
Is Psalm 56:12 describing a 2-way agreement(or vow) between God and the author of said Psalm?
2
Does (Psalm 112:7) Old Testament Hebrew mean "Bad News" Or "Evil Tidings"? All "Evil Tidings" is "Bad News" but Not all "Bad News is "Evil Tidings"
4
In Psalm 2:9 is the verb תְּ֭רֹעֵם from the root רָעָה shepherd or רָעַע break?