Ezra 5:1 > Could the prophet Haggai be a prophetess?

Now the prophets, Haggai and Zechariah the son of Iddo, prophesied to the Jews who were in Judah and Jerusalem, in the name of the God of Israel who was over them.

Upon further investigation into the Hebrew translation I see the word נְבִיאָה for "prophetess" is apparent. The Strong's Number for prophetess is 5031 but appears to be missing.

Which word is being used in this passage and why does the word for prophetess seem to appear?

The short answer is "No". Perhaps there is a little confusion at work here, because this verse is embedded in one of the Aramaic passages found in the (otherwise) Hebrew Bible: it is not in Hebrew.1

The "-ah" ending that makes this look like "prophetess" (if the word was in Hebrew), is in fact the Aramaic definite article, = "the". (See heading 2.2, bullet #2 in the link, above.) There is no question of Haggai being a woman.

For corroboration, see the very last entry on p. 1101 of Brown, Driver and Briggs, A Hebrew and English Lexicon of the Old Testament (it comes from the Aramaic section at the end), or the very last line of p. 868 (with the entry itself on the next page) of Marcus Jastrow's Dictionary of Targumim, Talmud and Midrashic Literature.

For convenience, here is the whole BDB entry for the word(s) in question: 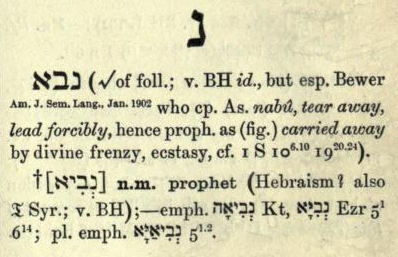 Also, bonus citation, this the corresponding entry from Ludwig Koehler, Walter Baumgartner and J.J. Stamm (eds), The Hebrew and Aramaic Lexicon of the Old Testament:

The little "dagger" (†) symbol in both entries is the standard symbol in these lexica that means "all known occurrences cited in this entry".

Neither of these authoritative lexica makes any reference to "prophetess". I hope that helps.

(One moral of this story: use "Strongs" with extreme caution, and especially in the absence of knowledge of the languages themselves.)

Postscript: for comparison, this is the Jastrow entry (linked above) indicating what the "prophetess" (feminine) form in Aramaic would look like:

(Note that the references provided as examples for the forms circled in red come from the Targumim - Aramaic translations of the Hebrew scriptures.)

Not the answer you're looking for? Browse other questions tagged translation-philosophy hebrew-bible ezra haggai or ask your own question.

24
Who is the Artaxerxes of Ezra 7?
3
Haggai 1:6 - Thirsty vs Drunk
7
Accurate translation of חֶמְדַּ֣ת in Haggai 2:7
0
How can we reconcile Leviticus 6:26-27 & Haggai 2:12?
2
In Ezra 5:6 who were the Apharsachites?
2
Why is the end of 2 Chronicles almost word-for-word identical with the first few verses of Ezra?
3
Why did Daniel not return to Jerusalem according to the decree of Cyrus in Ezra 1?