In Acts 7:51-52 are Stephen's claims about persecution of the prophets historically accurate?

"You stiff-necked people, uncircumcised in heart and ears, you always resist the Holy Spirit. As your fathers did, so do you. Which of the prophets did your fathers not persecute? And they killed those who announced beforehand the coming of the Righteous One, whom you have now betrayed and murdered...."

I saw this claim challenged in this comic: 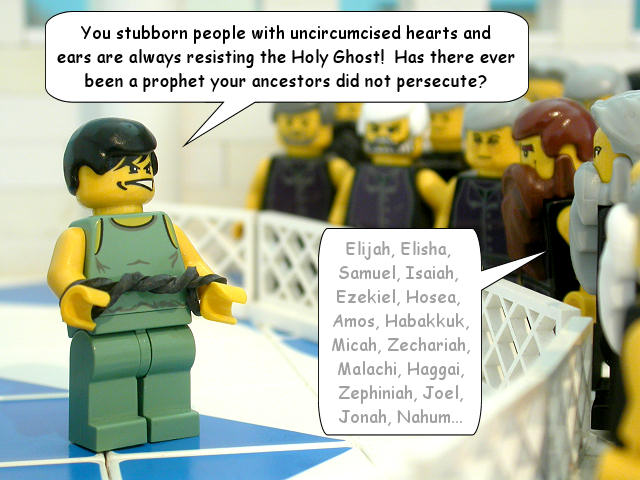 What is Stephen referring to? Is his claim accurate? It seems from this comic at least that this is not the case.

The Brick Testament is very antagonistic and chooses the worst possible interpretation of nearly any passage it attempts to illustrate. The charge of inaccuracy may be legitimate, but that misses the point.

Emotional speech is meant to drive to the heart of the matter. Steven is imprecating these religious leaders for their rejection of God's ultimate messenger (Jesus), and to make his point, he alludes to the typical persecution that came to the prophets of the past (Matthew 23:37/Luke 13:34).

Was Stephen attempting to say that every last prophet of old was persecuted by the ancestors of these people? I don't think so. I think he was pointing out that it was the typical lot of the prophet to face rejection and persecution from the recipients of the message, and that these people are the "sons" (in the common Biblical metaphorical sense, a la John 8:44, Matthew 5:9, or Galatians 3:26) of those in the past who rejected God by persecuting his messengers.

SECOND Stephen's point is that the majority of the prophets were persecuted. And Mark's point when he says that "all of Judea came down to be baptized by John" is that there was a major movement of people being baptized. Language is to be understood according to authorial intent.

THUS The comic would do better to make fun of the fact that Stephen thought that ears could be uncircumcised. How stupid Stephen must have been to have such a ridiculous misunderstanding of basic anatomy! Or would that make it too obvious that it's misunderstanding the Bible on purpose?

We know that Elijah was persecuted from his own words:

And Elijah said, I have been very jealous for the LORD God of hosts: because the children of Israel have forsaken thy covenant, thrown down thine altars, and slain thy prophets with the sword; and I, even I only, am left; and they seek my life, to take it away.

Then took they Jeremiah, and cast him into the dungeon of Malchiah the son of Hammelech, that was in the court of the prison: and they let down Jeremiah with cords. And in the dungeon there was no water, but mire: so Jeremiah sunk in the mire.

Stephen may also have been alluding to this passage in Chronicles:

And the LORD God of their fathers sent to them by his messengers, rising up betimes, and sending; because he had compassion on his people, and on his dwelling place: But they mocked the messengers of God, and despised his words, and misused his prophets, until the wrath of the LORD arose against his people, till there was no remedy.

Further, the books of the Prophets do not document their entire lives. Much of what was known about how the Prophets lived out their lives came from extra-Biblical Jewish tradition - oral or written. Most of this tradition has found its way into the Synaxaria (Lives of the Saints) in the Eastern Orthodox Church. In the non-Chalcedonian tradition, there is a reference called the Book of the Bee, which includes a chapter entitled "On the Death of the Prophets; How they Died, and Where Each One of Them Was Buried". The Eastern Orthodox Synaxaria include the accounts:

The Prophet Isaiah died a martyr’s death. By order of the Jewish king Manasseh he was sawn through by a wood-saw. The prophet was buried not far from the Pool of Siloam.

Ezekiel was condemned to execution because he denounced a certain Hebrew prince for idolatry. Bound to wild horses, he was torn to pieces. Pious Hebrews gathered up the torn body of the prophet and buried it upon Maur Field, in the tomb of Sim and Arthaxad, forefathers of Abraham, not far from Baghdad.

The idolatrous priest Amaziah of the pagan temple particularly hated the prophet. The prophet predicted speedy destruction for him and all his household, and for this he was subjected to beatings. Hosiah, the son of Amaziah, struck the saint on the head with a club and seriously wounded him. Still alive, the Prophet Amos reached his native village and died there around 787 B.C.

I assume that the above or similar accounts can also be found in the rabbinic tradition (e.g. Talmud), but I haven't confirmed.

Stephen was certainly speaking hyperbolically - not all of the Prophets were martyred - but his statement in Acts seems to reflect a more or less common knowledge of those martyric deaths that did occur.

The Bible IS contradictory in places. There is no question about it. Examine Acts 1:18 and compare it to Matthew 27:3-8. Here we find not one, but two contradictions. Point 1: Judas did not buy the field, as Luke wrote in Acts, but Matthew reveals it was the Pharisees that purchased the field with Judas'money. So Acts is incorrect. Point 2:We know Acts is incorrect because Matthew backs up his statement about Judas with prophecy from the Tanakh. But here, Matthew ascribes the prophecy to Jeremiah, and it was really from Zechariah.

There is no contradiction. About circumcision of the ears and heart this is meant to be a metaphor. Circumcision as meant to be a connection between God and he jews but jews disobeyed God's word and hated His prophets. They were formal and got circumcised but it was an empty act. It is like signing a document you never intend to respect. About the attack on prophets all prophets were attacked more or less. And yes some were killed.

Not the answer you're looking for? Browse other questions tagged history acts or ask your own question.

18
In the time of Jesus, were the Jewish authorities allowed to execute?
7
To which scriptures of "the prophets" does Acts 10:43 refer?
5
Who are "the rest" in Acts 5:13?
2
In Acts 5:9-11 why does Peter dispense immediate judgment?
1
Are Jesus' words in Matthew 23:37 regarding Jerusalem killing prophets historic or predictive?
2
Did Judah go to Babylon for captivity because of the error of Hezekiah or for the sins of Manasseh?
4
What are the different languages represented in Acts 2:9-11a?
2
Reading from the book of the Acts of the Apostles (3,13-15.17-19)
3
What is the logic behind the Jews' reasoning which led them to spontaneously stone Stephen to death?