Who is "the man" in John 2:25, and why did the ancient manuscripts render "anthropos" as a Nomina Sacra?

My wife and I were studying John 2 and came across this verse, which seems clear-cut in English:

and because He did not need anyone to testify concerning man, for He Himself knew what was in man.

So I was taking "man" to be any human being. But in the Greek it seems possible that He might be talking about Himself (as in, the [Son] of man):

(my best attempt to translate):

and because no need He was having so that anyone should testify about the man, for He (Himself) was knowing what was in the man.

I know the use (or likewise, the exclusion) of the definite article doesn't always mean much as the NT writers seem to include or exclude them without any apparent reason, so I still leaned towards "humans in general". So I did some digging and discovered that many of the ancient manuscripts use a Nomina Sacra for both "ἀνθρώπου" and "ἀνθρώπῳ", which as far as I know, is only used in reference to the Son of Man (with υἱὸς having the NS rather than ἄνθρωπος, but sometimes both are written as such).

So, is "The Man" Jesus Himself, or humans in general? If the ancient witnesses held the view that Jesus was referring to Himself, what are the implications?

Edit: as a counter to the NS view, anthropos (in reference to men who are not Christ) is also used in some manuscripts, which puts the focus more on the definite article.

But Jesus on His part did not did entrust Himself to them, because of His knowing all men,

That is, Jesus is said to have a very complete and fundamental understanding of human nature because He knew people perfectly. Thus, "man" in V25 becomes "humanity", thus, V25:

That is, this verse is simply saying that because Jesus understood human nature and hu7manity so well, He did not need to have anyone explain it to Him. Note the comments of Albert Barnes:

He knew what was in man - This he did because he had made all John 1:3, and because he was God, John 1:1. There can be no higher evidence than this that he was omniscient, and was therefore divine. To search the heart is the prerogative of God alone Jeremiah 17:10; and as Jesus knew what was in "these disciples," and as it is expressly said that he knew what was in man - that is, in "all people" - so it follows that he must be equal with God. As he knows "all," he is acquainted with the false pretentions and professions of hypocrites. None can deceive him. He also knows the wants and desires of all his real friends. He hears their groans, he sees their sighs, he counts their tears, and in the day of need will come to their relief.

for he knew what was in man; which none but the spirit of a man can know; his inward thoughts, the secrets of the heart; thus Christ knew the thoughts of the Scribes and Pharisees, Matthew 9:4, being a discerner of the thoughts, and intents of the heart, Hebrews 4:12.

I do not have access to all MSS of the NT. However, I have a personal copy of Codex Sinaiticus which does NOT use nomina sacra for "man" in John 2:25. Such devices were an interpretation of the scribe and were probably not original (they vary from MSS to MSS). Therefore, the OP will need to specify which MSS is being addressed for nomina sacra.

I also note that only some of the MSS referenced by the OP use nomina sacra showing a divergence of interpretation by the scribes.

I opt for the solution that the term ἄνθροπος used two times in v. 25 in both cases indicate the Lord Jesus Christ Himself.

The previous 24th verse says that "He did not entrust Himself to those who believed in Him for He knew all". This is a claim of Christ's divinity, for only God - neither arch-arch-angel, nor satan, nor any most perspicacious man who ever has lived or will live on earth or other planet - can know what is in the mind and heart of man, and in this immediate concrete context, Christ does not entrust Himself even to those who, apparently, acknowledge His supra-natural abilities. Why is Christ dissatisfied then even by those acknowledgers?

It is simple: because just like in John 6:26, He discerned that they did not acknowledge the inner cause and meaning of the miracle-working, to wit, that the one who acts miracles out of His sovereign authority, without prayers, is God, but their sole concern was only the effect of a miracle: healing, getting satiated etc.: "You have not come to Me because you have seen a miracle, but because you have eaten and got satiated" (Jon 6:26). Thus, unlike the Samaritan woman who (after seeing that Jesus miraculously knew her life's facts without knowing - speaking in a humanly dimension - her, in fact, seeing her first time) cared about issues of salvation and theology (John ch.4), those Jews in John 2:24 and 6:26 cared about and coveted for earthly things, even when praising the Lord's miraculous deeds. Thus, unlike the Samaritan woman who through seeing a miracle, used this seeing as a trigger for elevating herself above the earthly things and even above this very miracle to apprehension of heavenly, theological realities, the Jews saw in the miracles of the Lord an opportunity to lay hold of earthly things with an even greater greed, and they would desire to make Jesus a King, just for guaranteeing for themselves those earthly, transient values, being idolaters in the core of their hearts and to the marrow of their bones. And the Lord Jesus Christ knew their hearts, therefore did not entrust Himself to those woe praisers and admirers.

Now, in ἄνθρωπος of the verse 25 He implies Himself, for the grammar of the sentence is so more plausible, for the word is with a definite article, indicating, thus, not general human kind, but rather a concrete man, here, the Lord himself. But what does it mean? I think, in the light of what was said above, the phrase "He knew what was in the man", that is to say, "He knew what was in Himself", means that He knew that the divine authority was in Himself, and He needed not any man to acknowledge this authority, for Father's acknowledgment and testimony was enough for Him, and this testimony was that He worked the deeds of the Father, i.e. the miracles, out of His own authority, which was identical to the authority of the Father, for as Their deeds are one (John 5:17), so is Their authority. That's why also elsewhere He says that He does not need to receive testimony from men (John 5:34), but it is enough for Him to testify about Himself and simultaneously be testified by the Father (John 8:18).

Thus, yes, the ἄνθρωπος must be the Lord Jesus Christ Himself. However, other interpretations and translations that a general "man" is implied here, or all human hearts, is also theologically (less so grammatically) plausible, because already in a previous verse it is a clear statement of divinity of Christ through proclamation of His ability to know the inner intent of human hearts.

To say in passing: John 2:24-25 are a verses of frightening warning, dismantling our hearts' nasty propensity to utilize the Lord for our earthly aims, and not, as it is due, to love Him so as to start hating those very earthly aims, for love of the earthly aims is hatred towards Christ (cf. James 4:4), but we want a tamed Christ, false Christ, an idol-Christ who is complacent to our earthly attachments and whims.

Op asks, "Jesus Himself, or humans in general? If the ancient witnesses held the view that Jesus was referring to Himself, what are the implications?

The context of this verse along with others should establish that it is Jesus who knows all about what is in mankind.

"The applause of the crowd did not blind Him to the motive which prompted it. He knew that they had no hunger for spiritual food. He is aware of all things (Jn. 21:17). Our character, Our condition, our inner most motives are transparent to His view. No wonder He did not entrust Himself to faith secured by signs!" Concordant commentary

A few chapters later we read again why he retreats from the crowd.

Jesus therefore, having known that they are about to come, and to seize Him by force that they may make Him king, retired again to the mountain Himself alone. John 6:15

He had to find solitude from the crowd until it was time to accomplish what He ultimately came for.

The implication should bring great comfort to all because Jesus knows all hearts and the love of the Father for each one.
Romans 5:8

Several things to consider. The Greek grammar of nouns and adjectives depends on cases. Position can have emphasis, but doesn't determine such things as subject, object, etc., while position in English does. Second, the context to the previous verse is important. Third, when ἄνθρωπος is singular, it often means mankind.

Figure 1. How ἄνθρωπος is translated in the Septuagint (LXX) (generated with Logos Bible Software) 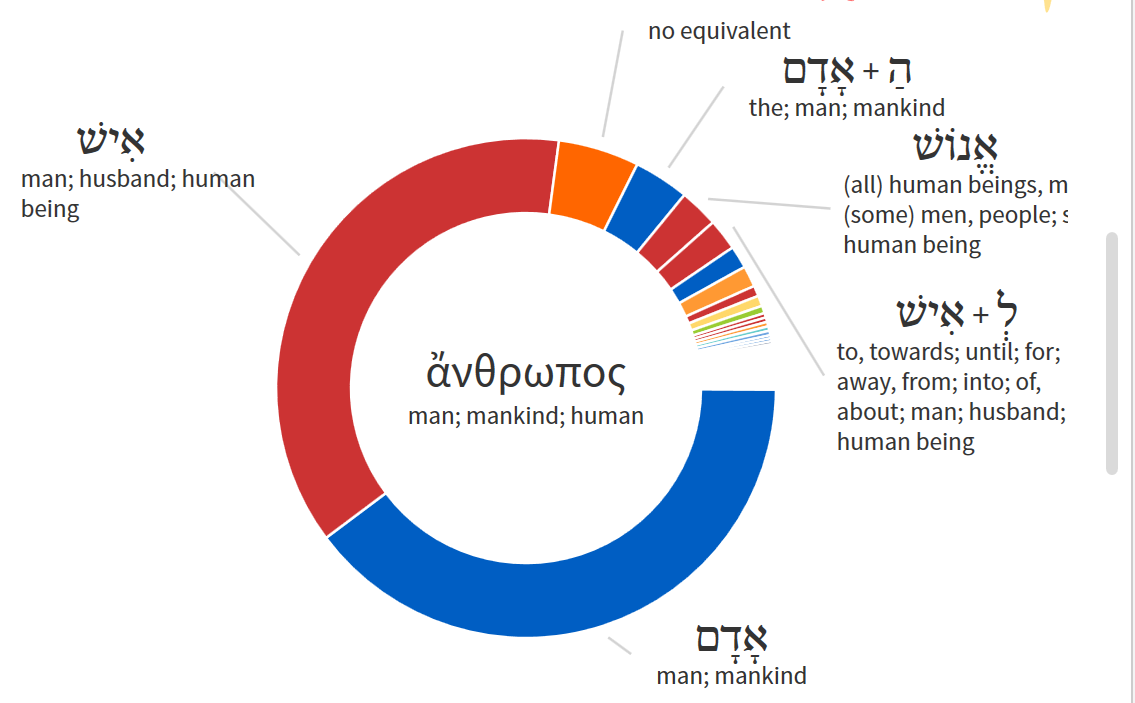 Thus, a better translation of:

But Jesus himself did not entrust himself to them, because he knew everything, and because he had no need that someone should testify about mankind. For he himself knew what was in a human being.

Thus, in a sense the answer to your question is yes and both. "He knew everything" emphasizes Jesus' deity, but this passage also emphasizes Jesus' humanity. In the Hebrew mind, know can mean to be acquainted with. The language in this passage is experiential, ἐπίστευεν in particular, which is the verb often translated believe in John.

5
John 9: Did the blind man know scripture?
2
What manuscripts did people use to create the NIV and KJV? Are the manuscripts used to fashion the NIV older than the KJV?
6
In John 4:51 why a son (παῖς) and not a son (υἱός)?
0
Why did the lame man in John 5:1-15 not know that Jesus healed him, but the blind man in John 9 knew that Jesus healed him?
1
What specific set of manuscripts did Peter mean by "prophetic word" and "Scripture" in 2 Peter 1:19-21?
3
Why did Textus Receptus add "prōtotokos" in Matthew 1:25, or why did the greek NU-Text omit "firstborn" before son?
1
In John 9:10 why didn't the blind man make the connection between his healing,Jesus and Son of Man?
2
Why did John use the name Nicodemus, a Greek name, instead of his Hebrew name in John 3:1?