"There was a man who was sent from God. His name was John." (KJB)

The first 'was' is 'egeneto'. It is aorist, indicative, middle.

('Was' or 'came' are the most common translations here.)

The 'was made' is also 'egeneto', and it is also aorist, indicative, middle.

(The KJB is an outlier, and this is usually translated 'became'. Weymouth's has 'came in the'.)

One fun exercise when dealing with one greek word used in different contexts is to try to use a word or phrase that has enough range of meaning so as to cover both situations. For "egeneto" I believe "came to be" works nicely. Maybe you can come up with a better word or phrase.

We can, therefore, translate John 1:6 as,

"Came to be a man, sent by God, whose name was John.

"And The Word came to be flesh and tabernacled among us..."

In the context of John 1:6, egeneto is used to communicate that John showed up (came to be) somewhere having been sent by God.

In John 1:14, egeneto is used to communicate that the Word became (came to be) something it wasn't before... flesh.

So, even if we were to translate egeneto exactly the same way, it would still necessarily communicate different flavors of meaning based on the context as demonstrated.

It seems the translators at the very least were reasonably trying to reflect this difference in meaning (as we've already noted) given the different contexts. That said theology may also have played a role.

With regard specifically to John 1:6,

The verb γίνομαι occurs about 671 times in the NT and BDAG lists 10 basic meanings for it (see the appendix below). Similarly, Thayer lists many shades of meaning as well. Thus we should not be surprised that it is variously translated depending on context.

"the word became flesh". Note that whatever one's Christology, this plainly describes a transformation of the "word" to become "flesh". Again, John does not describe how this occurred, but simply stated that such a transformation occurred.

Now, while both words occur in similar grammatical form (aorist indicative middle for V6; aorist indicative active for V14) they have a quite different syntactical and semantic context and thus must be translated slightly differently. Most modern versions get these fairly correct:

I see little justification for the outdated KJV translations of "was" (v6) and "was made" (V14); further "was made" is passive and the Greek is active.

APPENDIX - Headline meanings for γίνομαι as per BDAG

For more details, see the very extensive entry in BDAG. 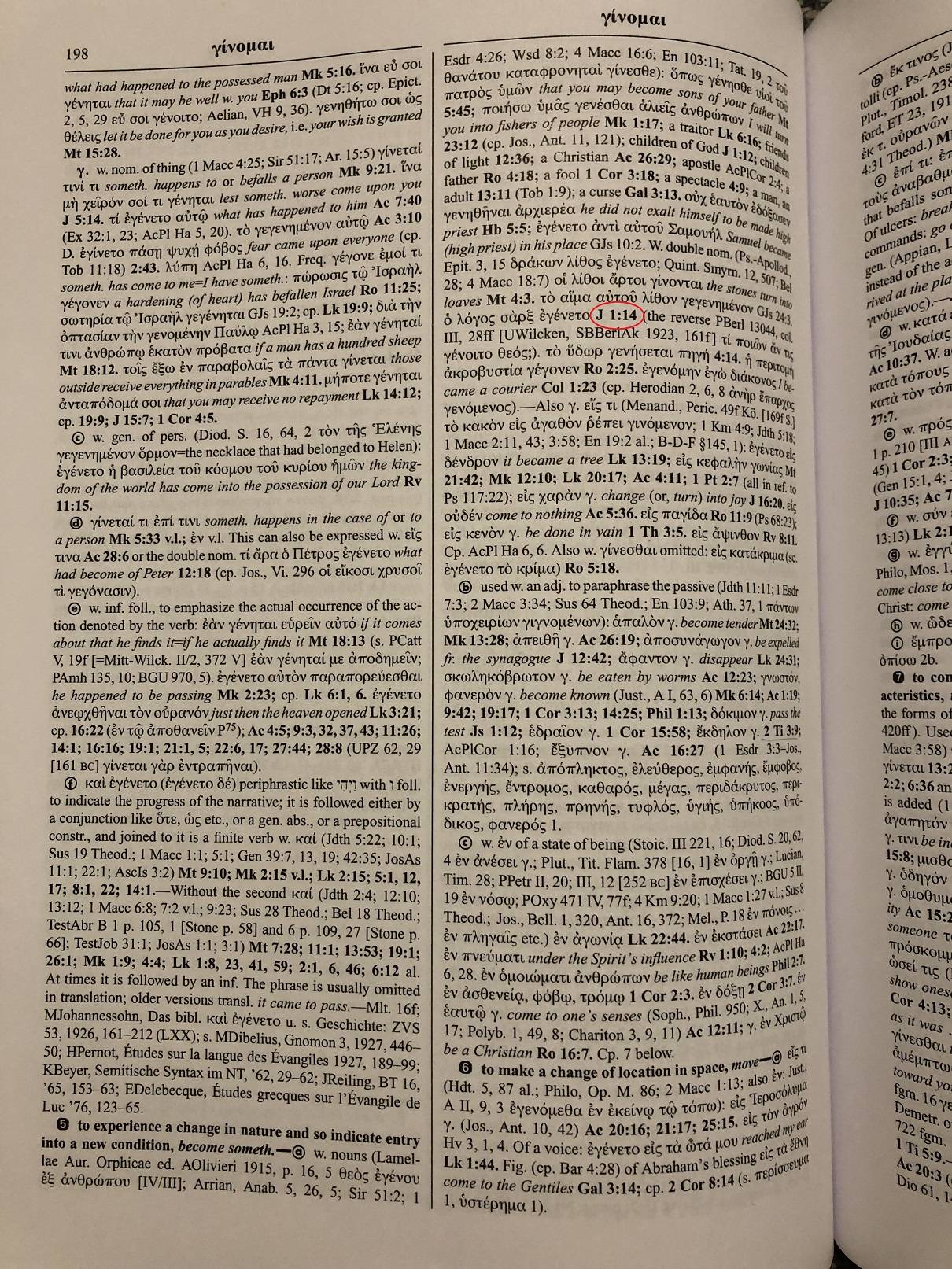 Some examples of "become" are John 1:12 become children of God, Matthew 5:45 become sons of your Father, Hebrews 5:5 became a high priest and Mark 1:17 become fishers of men. There is nothing in these examples that say people became spirit beings or God-man.

For anybody using BDAG definit­ion #5 to prove the "change in nature view of John 1:14, they have to show that BDAG itself cited John 1:14 for veracity.

Giving emphasis to BDAG's meaning #5 for the Greek word egeneto to support the interpretation that God the Word nature became flesh nature, the verses cited by BDAG should carry this same sense. Examining the verses cited, none has the idea of this God the Word nature became flesh nature idea. I wonder if BDAG itself cited John 1:14 for egeneto's meaning #5, and even if they did, it creates questions whether God changes from spirit to flesh. BDAG’S definition #5, for John 1:14 gives the impression that the God of the bible changes which the bible say He does not. Does God have 2 natures?

Not the answer you're looking for? Browse other questions tagged greek john grammar christology or ask your own question.