Answers to “What ancient practice did Jesus have in mind, when he said of salt being thrown out as waste?” indicate that the word “salt” doesn't necessarily mean table salt, but can include salts of calcium, potassium, magnesium, etc.

So, it wouldn't be unreasonable to translate Genesis 19:26 as:

But his wife looked back from behind him, and she became a pillar of powder [or dust].

The question though is about the word commonly translated as “pillar” in English and as “statue” in Romance languages.

something stationary, i.e. a prefect, a military post, a statue: — garrison, officer, pillar.

What are the reasons for the specific idea of a “pillar” or “statue”, especially when related to something that is composed of powder?

(For instance, why would “pile of dust” or even “pile of powdered bones” be inappropriate?)

The salt formations of the Dead Sea are referred to as "uprights", i.e pillars (נציבי מלח) in Hebrew, from the OT onward. These formations can have very strange and sometimes humanoid shapes. Search for images using "Dead Sea salt pillars". The following image of a Dead Sea salt pillar by Yair Aronshtam is licensed by Creative Commons. 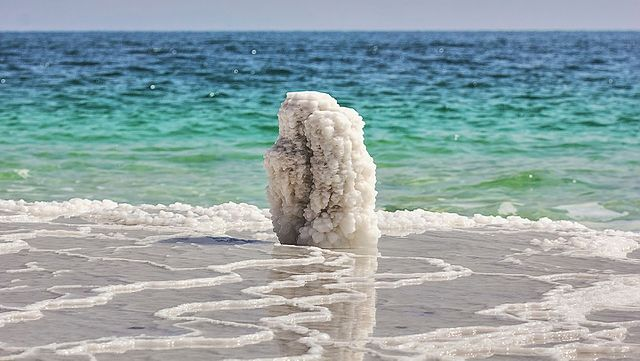 Guards are also referred to as "uprights" or "stationed" (נציבים) in Hebrew because they stand up to guard or are stationed to guard and from here the word has also come to mean a garrison of soldiers or an officer representing a military presence to a local population.

There is no thematic connection between the story of Lot's wife and the parables of salt in Matthew, Mark, and Luke.

The parable of Lot's wife is to someone who looks back. The salt is the salt of tears of remorse.

Not the answer you're looking for? Browse other questions tagged genesis hebrew or ask your own question.

1
What ancient practice did Jesus have in mind , when he said of salt being thrown out as waste?