How can we determine the author's intent in listing various ages in Genesis?

I believe some of the ages given in Genesis are historical, but am one of many who happens to think the earliest ages might be symbolic (example source). If this were to be the case that leaves us with the question "Why?". What would be the author's intent in choosing these particular numbers?

Many people think the Genesis ages are chosen to be numbers that people could easily remember, and some are. At the same time, there are very often ages such as 905 and 912. Some other ages may be divisible by a common figure of influence.

Is there something they all have in common? How would we know which are historical and which are part of the story for another reason? Is there any one “rule” applicable to all of those Genesis ages that would help us interpret the story?

Although I disagree with your presupposition that the ages are merely symbolic, I think this is a great question nonetheless. The reason I say this is that regardless of whether the ages are historically significant, we should assume they are literarily significant. The Bible is literature, and each author (or redactor) of each book has crafted his work of literature with a particular purpose in mind. What the author does include should be considered significant, since it was selected for inclusion while so many other details were left out. (This is often referred to as the "principle of selectivity".) The author could have just skipped the ages altogether if they were merely historical data points; there are plenty of other details the author leaves out, after all.

Short Answer: With that said, I believe the textual evidence points toward the ages being very significant in advancing the author's theological agenda. These ages show how the world changed after the flood, and how human life made the enormous transition from the original, exalted state of creation to the "modern", decrepit state of things (at the time of authorship.)

Here is a chart of the ages of the Patriarchs prior to the Israelites' time in Egypt, normalized by birth date: 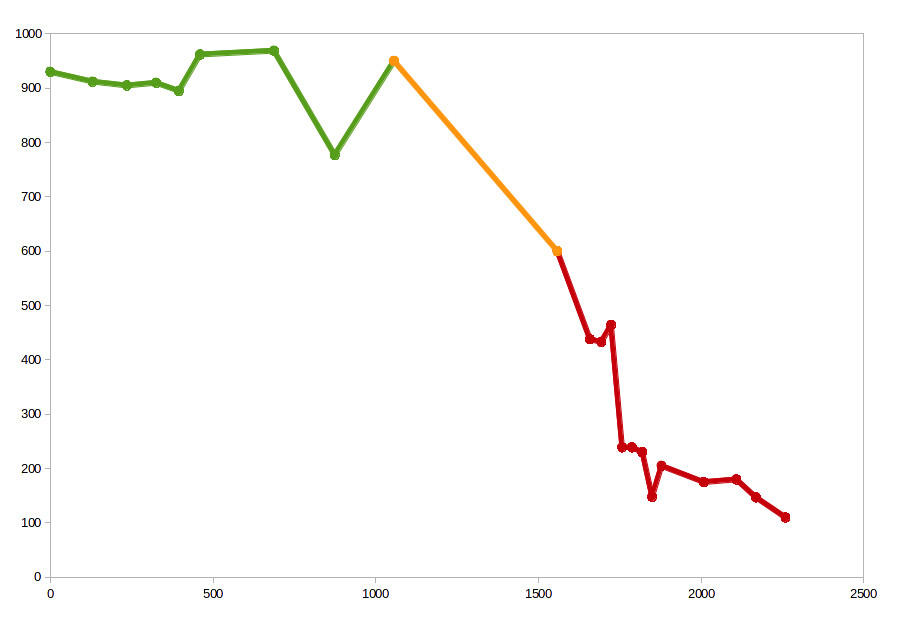 What the author shows us is that prior to the flood people lived a really, really, really long time, but then the flood changed things. Since I mapped the ages by birth date and not merely by textual entry the "taper" isn't as clear in the previous graph, so here is another graph of the post-flood ages that shows the post-flood taper more clearly: 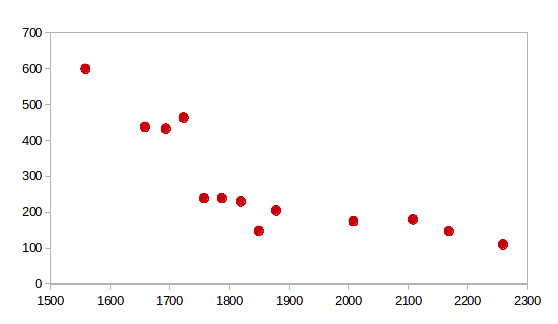 You can see that while it is not a perfectly smooth curve, the trend does show, over all, the degradation of the human lifespan following the flood.

The flood is a major catastrophic event in Genesis, executed because of man's great wickedness. The author wants the audience to see that things used to be much better than they are "now," but because of man's great wickedness, God executed judgment on the human race, and it had an enormous negative effect on our lives. The trend is intended to show the readers that their lives would have been much better if man hadn't sinned so greatly against God.

1: I left out Enoch, since the text explicitly claims that he was caught up to heaven before he could live out his days and die.

The reason for this is no doubt that many of the traditions that came to be recorded in the Bok of Genesis were initially handed down orally by tradents, who used a variety of techniques to help them remember the stories, including poetry, numbers and meaningful names.

Enoch, who traditionally invented the calendar, follows another rule: Genesis 5:23 tells us he lived 365 years. At the same time, we also find numbers that tradents could easily remember. Enoch's age is split by the birth of Methuselah when he was 65, then exactly 300 more years to his death. Enoch's father Jared, in like fashion, (Genesis 5:18) lived one hundred and sixty two years when he begat Enoch then another 800 years.

The number 17 had special significance in many of the ages in Genesis.

Even more compelling are the ages of the Hebrew patriarchs and their family members, which are hidden in patterns based around the number 17.

Examining these supposed lifespans, we find that:

I also detect patterns around the number 17 among other Genesis characters. For example:

There is more than one “rule” applicable to all of those Genesis ages, but the most common, and the most complex, is the use of the number 17.

Not the answer you're looking for? Browse other questions tagged genesis authorial-intent historical-criticism inspiration or ask your own question.

10
How can the 3 Questions be resolved with the math still correct?

21
What is the significance of “east” in the Scriptures?
32
How can we ensure a given “chiasm” was intentional by the author, and is not merely fanciful eisegesis?
4
Why is Joseph's age given in Genesis 41?
7
What was the authorial intent of Genesis 1?
16
Where does the extra information about Melchizedek come from in Hebrews 7?
2
Is there an allusion to Genesis 3:7 in Luke 24:31?
8
What textual clues are there that the original readers of Genesis would have understood 11:27–50:26 in a different way than Genesis 2:4–11:26?
10
Are there gaps in the genealogy from Adam to Noah?
7
What is the significance of the scarlet thread on Zerah's hand at the end of Genesis 38?