Was or wasn’t Shem’s son Arphaxad born on the ark?

My question is at the very bottom of this; I'm using the KJV.

According to the following 4 verses, Shem's son Arphaxad would have been born on the ark.

Gen 8:13 And it came to pass in the 601st year (of Noah’s life), in the 1st month, the 1st day of the month, the waters were dried up from off the earth: and Noah removed the covering of the ark, and looked, and, behold, the face of the ground was dry.

(If Noah was 601 years old here with Shem 500 years younger, Shem would have been 101 and Arphaxad at least born).

However, accordingly to the citings below, no children left the ark.

Gen 8:15-19 And God spake unto Noah, saying, Go forth of the ark, thou, and thy wife, and thy sons, and thy sons' wives with thee. Bring forth with thee every living thing that is with thee, of all flesh, both of fowl, and of cattle, and of every creeping thing that creepeth upon the earth; that they may breed abundantly in the earth, and be fruitful, and multiply upon the earth. And Noah went forth, and his sons, and his wife, and his sons' wives with him: Every beast, every creeping thing, and every fowl, and whatsoever creepeth upon the earth, after their kinds, went forth out of the ark.

At first it seems Arphaxad would have been born on the ark. While Noah brought with him every living thing, Arphaxad isn't shown as one. Next, God doesn't address or include Arphaxad as one who would be peopling the earth. However, “And Arphaxad lived 530 years, and begat Salah:" (Gen 11:12) (KJV).

How can this be reconciled?

2/23/14 NOTE: For further detail and cross-referencing, please see
BH-SE: How can the 3 Questions be resolved with the math still correct?

although in the OP answer, the rest of the verse is quoted:

Of course, that end phrase ("two years after the flood") solves one of the main problems: this is why Arpachshad is not mentioned among those who leave the Ark. According to Gen 11:10, he was born two years later, and this is the tradition accepted by Rashi.

But the question itself is very astute, because that leaves the problem of the other dates which seem to add up to Arpachshad's being born in the year of the flood, or on the Ark.

The very best treatment of this I know is in the superb study by Jeremy Hughes, Secrets of the Times: Myth and History in Biblical Chronology (Sheffield: JSOT Press, 1990). He deals with this problem directly on pages 22-23, which I hope Google Books will let you see. Hughes identifies the same discrepancy you do on pp. 17-19, setting out the data there, but defers his attempt at an explanation for a few pages.

In very short summary, Hughes suggests that this is a correction to the "Priestly chronology" that solves one problem, but only by introducing another unnoticed. You will really need to read him for the details, I'm afraid, which are too complex for summary here.

His larger charts setting out the various (competing) chronologies are available online, though (see Tables 1.1 and 1.2 for data relevant to this question), and although you need to see his book for the argumentation and reasoning, the charts themselves might still be of interest.

Genesis 5:32 does not say that Noah was 500 years old exactly when he had Shem, it says:

with the colon in there it disconnects the births from his age. The five hundred years is there to note when God gave him his marching orders. It shows us in concert with Genesis 7:11 that it took Noah approximately 100 years to build the ark.

In the six hundredth year of Noah’s life, in the second month, the seventeenth day of the month, the same day were all the fountains of the great deep broken up, and the windows of heaven were opened.

These are the generations of Shem: Shem was an hundred years old, and begat Arphaxad two years after the flood:

I believe the better explanation is the common practice of rounding numbers. Shem was ca. 100 years old when the flood began, though his exact age may have been 98.

Similarly, David reigned 7 1/2 years over Judah, 33 years over all Israel, and 40 years total (2Sam 5:5): unless one assumes one of these numbers are rounded, one has a serious problem.

Similarly, when counting the number of people in Israel in Numbers, the following was the result: 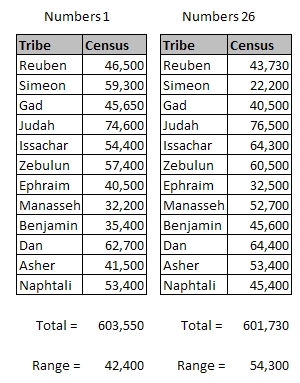 We would be mistaken to assume that each of these 24 numbers are exact. For instance, consider the top left number (the number of men able to fight in Reuben in Num 1): 46,500. No one reading the text naturally would assume that this number is exact: there may well have been 46,497 men in Reuben.

Similarly, when i say that pi is 3.14, no one would accuse me of lying because the exact value of pi has an infinite number of decimals (and is indeed unknowable).

Thus: There is no reason to read the "life begins at birth" vs. "life begins at conception" debate into the story of the life of Shem. There are several arguments one can use, but Shem's age is not among them.

This is not precisely an answer to the question, but it is a requisite concept. (It also didn't fit into a comment well.)

Margin of Error When Linking "When X was Y years" Statements

When I say "error" here, I'm not referring to errors in the text, only inaccuracies in measuring lengths of time.

Linking ages statements together has a necessarily large margin of error. The time period "when I was 30" covers exactly 365 days.

My age when my this grandson was born is between 60.00 years and 61.99 years. The 365 day imprecision is compounded when I chain these two "when X was" statements together. The more links in the chain, the greater the possible error.

In the last 5 verses of Genesis it seems Joseph’s age at death of 110 is given twice. Joseph dies at about 110 That isn’t done for anyone else and made me think the authors might be defining “life” as one thing and “years old" ("age" and "lifetime") as another.

Looking at the question above from a math perspective and assuming “life” is a synonym for “years old” (“age” and “lifetime”), a problem will always exist. The only mathematical explanation is that fatherhood and childhood (life) begin at conception.

A similar question to resolve comes from a different set of factors. Combining the following three verses seems to leave 2 years to explain.

And Noah was 500 years old: and Noah begat Shem, Ham, and Japheth.

In the 600th year of Noah's life, in the 2nd month, the 17th day of the month, the same day were all the fountains of the great deep broken up, and the windows of heaven were opened.

These are the generations of Shem: Shem was an 100 years old, and begat Arphaxad 2 years after the flood:

[Note: It’s incorrect to claim that "2 years after the Flood" shouldn't be there (i.e. is simply a mistake). In that case, Shem would have been 100 years old (Noah 600 less becoming Shem’s father at 500 = Shem 100) with his son Arphaxad born and in the ark during the flood. However, no living child left the ark.]

Again, the only mathematically acceptable explanation is that fatherhood, motherhood and childhood (life) begin at conception. That’s what the Genesis authors are indirectly stating.

There's more detail on this and others with How can the 3 Questions be resolved with the math still correct?

Arphaxad was born the year following the flood. Here is why:

It has to do with how the Jews counted numbers back then. Today, we have the concept of zero. The Jews started out at one back then. So when someone was born, they were already 1-years-old. So when someone in Genesis is told of being of a certain age, you need to subtract 1 from that age to reconcile it with today's math. Today, we don't consider someone as a 1-year-old until their 2nd year of life.

If you subtract one from all the years given in Genesis starting from Adam and working forward until the birth of Arphaxad, the math comes out perfectly with Arphaxad being born the year after the flood.

Here is an excerpt from a website that best describes the confusion between the way we modern Westerners count and the way the Hebrews historically counted:

Counting in Hebrew and Western Idiom

Using another example, the Bible tells us that the Israelites were to circumcise their sons on the eighth day after birth -- see Genesis 17:12. Most Westerners would calculate this as follows: Let's say a child was born on the Sabbath -- eight days later is the day following the next Sabbath (i.e. the first day of the week), is it not? NO, IT IS NOT -- not in the Hebrew mind! So just how are those eight days to be counted? The fact is, it doesn't matter if the child was born five minutes into the Sabbath or five minutes before the Sabbath is about to end:

If the child is born on the Sabbath, that child will be circumcised on the NEXT SABBATH -- NOT on the first day of the week following that second Sabbath!

Thus, the answer is: No, Arpachshad was definitely not born or even conceived on the ark.

Not the answer you're looking for? Browse other questions tagged genesis contradiction noah mathematics or ask your own question.

25
Why is Genesis careful to record the exact dates of the flood?
11
Ancient Hebrew Calendar(s) and Modern Translations of "Years"
10
How can the 3 Questions be resolved with the math still correct?
7
Joseph dies at about 110
5
17th day of the 2nd month in Noah's 600th year - meaning of the numbers
3
Reading the same thing 3 times in 18 verses

3
Reading the same thing 3 times in 18 verses
5
Noah - 600 before his 600th?
10
How can the 3 Questions be resolved with the math still correct?
0
What is the context of 'begat' in Genesis 5:32?
0
Did original Scripture say Noah was a "son" of 600 years when the water landed?
11
Were Shem, Ham and Japheth Triplets?
7
Does Genesis indicate everyone has Noah's sons as common ancestors?
2
Whom is God conversing with in Genesis 6:7?