Why does Ezekiel refer to Jerusalem as "south"?

"Son of man, set your face toward the south; preach against the south and prophesy against the forest of the southland."

As is evident from v. 6 (in other versions 21:2), Ezekiel here is prophesying against Jerusalem and its upcoming destruction:

Son of man, set your face against Jerusalem and preach against the sanctuary. Prophesy against the land of Israel

However it's not clear where Ezekiel is standing. Some have suggested that Ezekiel is standing in Babylon. However this doesn't help much, since we know Babylon is almost directly east of Jerusalem (see map below), so Jerusalem would be west, not south of it. Jeremiah 1:14 also seems to associate Babylon with the north, but Jeremiah might be more concerned with the evil associated with the north than true geographical north, see discussion here. So why would Ezekiel describe Jerusalem as laying to the south? More importantly, where is Ezekiel standing during this oracle, and does it matter?

Also note that Ezekiel is said to set his face towards the south. This is very important. Because it's not enough to say that the Chaldeans took a northern route, as some would posit, since the text makes it clear that the prophet himself is standing north of Jerusalem, and is turning his face in a southern direction towards the city. 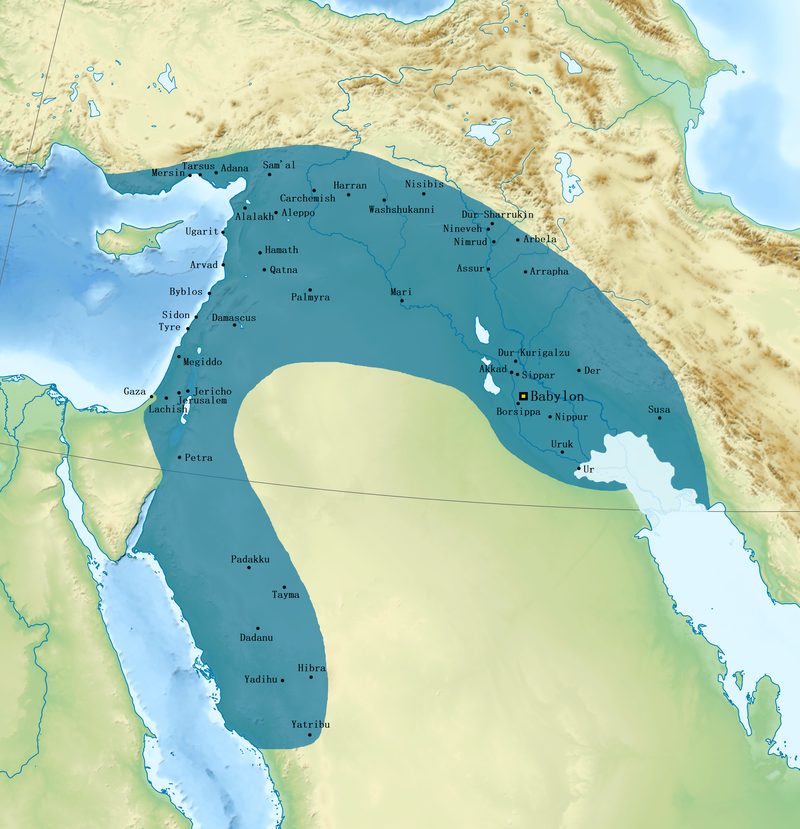 By the reverse logic, when standing in Babylon, Jerusalem might be expected to be designated as "south"; but the situation is a bit more complex.

In Eze 20:46 we have three words translated ";south" (or similar) as follows:

Son of man, set your face toward the south [תֵּימָן teman]; preach against the south [דָּרוֹם darom] and prophesy against the forest of the southland [נֶגֶב negev].

All three words are used of the south direction, including that of the sanctuary, or the south wind, or the land of the south. Barnes summarizes this:

In this verse occur three Hebrew synonyms for "south," denoting:

The variety of terms helps the force of the application. Chebar is in the north of Babylonia; from the north the Chaldaeans came upon Judaea (see the Ezekiel 1:4 note).

Here is Barnes comment on Eze 1:4 (very similar to others' comments)

Out of the north - From this quarter the Assyrian conquerors came upon the holy land. The vision, though seen in Chaldaea, had reference to Jerusalem, and the seer is to contemplate judgment as it is coming upon the holy land. Others consider the words expressive of the special seat of the power of Yahweh. The high mountain range of Lebanon that closed in the holy land on the north naturally connected to the inhabitants of that country the northern region with the idea of height reaching to heaven, from which such a vision as this might be supposed to come.

Thus, when standing in Babylon, it might be quite reasonable to speak of Jerusalem as the land of the "south".

I think you are incorrectly linking multiple separate prophesies against different groups/location and considering them as a single prophecy against the city of Jerusalem. From the text I think it's clear they are separate distinct prophecies happening. Many of them are connected and interelated but they are not all uniformly against the same people / location.

In many modern translations - such as the NIV - they actually have the verses in the sections of scripture you have identified (Ezekiel 20:1, Ezekiel 20:45 and Ezekiel 21:1) all clearly distinguished as separate prophecies. They have actually inserted "Titles" in the text to make the separation more distinct and apparent to the reader.

Before the other scriptures you mentioned there is another separation at Ezekiel 20:30 titled: Rebellious Israel Renewed.

These two passages go together. The first pronouncing a judgement and purging of Israel - the second a subsequent renewal that follows

Then Ezekiel moves into a new prophecy against a different region and people's. In the NIV at Ezekiel 20:42 we have the title: Prophecy against the South. To be clear - this is not Jerusalem and generally not a region considered to be inhabited by Israel. As Dottard correctly pointed out in his answer rather then using the word "South" the original Hebrew actually uses 3 separate words which identify an area which is approximately to the south of Jerusalem - Negev, Teman and Dorman. These words are often used as a shorthand for south - but really only in relationship to Jerusalem (and because often scripture was written from that perspective). These are considered placeholder names in the Bible. Almost like "Markers" on the map to describe locations / directions and they just so happen to be "south" relative to Jerusalem.

Negrev is a dry desert region to the south of Jerusalem. It basically the region South of Beersheeba See here which shows a map of its location.

Temen is basically a "Border town" for the region of Edom. It's also to the south of Jerusalem but is actually the North West corner of Edom a region that continues south east from there. See a map that shows this here.

And similarly Darom is a placeholder name used to mean South. I don't have a clear etymology but multiple sources I read linked it to do with the word bright"

If you understand how these names are used and look on a map at where these locations identify it becomes apparent Ezekiel is not prophecising against Jerusalem in these verses. He is either A) Prophecising against the people who inhabit the region's south of Jerusalem. The specific region around where the desert of Negrev and town of Teman are located.

or B) Prophecising over all the land until these points. With them serving as a kind of "Southern Border" which the prophecy extends to.

We can in fact find later examples when Ezekiel again uses some of these same names in prophecies against these regions. For example in Ezekiel 25:13 he prophecises over the Entire region of "Edom". He uses the same border town to the south of Jerusalem Teman once again. Its located at the northern border of Edom - along with another town called Dedan Located at the Southern border of Edom - in order to basically "set the boundaries" of the region the prophecy would effect. You can again see both of the map here

When we move into the next chapter 21 he then picks up a new prophecy specificially against the sanctuary of Jerusalem.

Not the answer you're looking for? Browse other questions tagged ezekiel context geography or ask your own question.

1
In Jeremiah is evil always associated with the north regardless of geographical location?

4
Does God intend Jerusalem to be eternally shamed In Ezekiel 16?
6
Why is the man going to measure Jerusalem in Zechariah 2:2?
6
Did Josephus misinterpret Ezekiel 12:13?
4
“Your arm bared” in Ezekiel 4:7
7
Does רוּחַ, rûaḥ refer to the Spirit of יהוה, YHWH in Ezekiel 37:9?
4
In Deuteronomy 3:27 Why should Moses Moses look East and South?
1
Are the forty years of Ezekiel 4 related to the seventy years of Jeremiah 25?
3
Ezekiel 21:2 מִקְדָּשִׁ֑ים (miq·dā·šîm), should it be translated as singular or plural?
2
What does Ezekiel 17:24 refer to? Who are the people or kingdoms spoken of
1
In Jeremiah is evil always associated with the north regardless of geographical location?