Does Bible cosmogony allow for the creation of other planets? [closed]

Ask Question
Asked 1 month ago
Active 1 month ago
Viewed 1k times
3
Closed. This question is opinion-based. It is not currently accepting answers.

Thus the heavens and the earth were completed in all their vast array.

Was this where other planets were created?

The Bible, in Jude vs 13 translates the Greek word 'planetes' as 'wandering stars'. It was known that these 'stars' wandered inexplicably but it was assumed that all celestial objects were stars and circled earth, so their perturbations were strange and 'wandering'. Only when it was worked out that they were circling the sun (not the earth) did it become clear that they were other than had been supposed. Until then, nobody reading the word "planetes" in the Bible up until cosmologists identified the difference between stars and planets, would have know what a planet was! They called them 'wandering stars'.

This means that all heavenly bodies are referred to in the Bible as either sun, moon, or stars. Planets come under the word 'stars'. Our earth and our moon are actually planets, but as that word did not exist, they are not spoken of as planets. Therefore, your question is answered in Genesis 1:14 to 16 -

That last sentence includes all the planets (for we live on a planet, and that chapter is also about the development of planet earth, already in existence.) We understand (from earliest times) that the greater light is our sun, and the lesser light is the moon (which is not a star but a planet which reflects the sun's light, unlike other moons orbiting other planets). And from earliest times people have looked up to the night sky to see billions of stars. Even though it's only been comparatively recently that we've learned that billions of planets are also "up there", to the naked eye planets like Venus and Jupiter and Saturn look for all the world like stars that just moved strangely.

This means that when Genesis 2:1 concludes the preceding section with, "Thus the heavens and the earth were finished, and all the host of them", planets are included.

Does bible cosmogony allow for the Creation of Other planets?

All things include other planets.

1 Thus the heavens and the earth were completed in all their vast array.

Was this where other planets were created ?

Planets were part of the heavens. They were completed by the time of Genesis 2:1.

The Scriptures teach the theology of Creation, but teach the readers at the level of science at the time of the writing. As Anne mentioned the noun for planets (πλανῆται) does appear in Jude 13. It is translated "wandering stars," what planet meant back then, because that's what makes sense in the context. Also, James 1:16-18 does seem to reference planets indirectly.

Why does James's using this verb imply planets?

τροπῆς ἀποσκίασμα (shadow of turning) is an apparent astronomy term.

Given the astronomy at James's time, a comparison of God's perfection to an imperfect world would naturally point to the wanderers (planets) as the opposite extreme.

Do not be deceived, my beloved brothers. 17 Every good gift and every perfect gift is from above, coming down from the Father of lights, with whom there is no variation or shadow due to change. 18 Of his own will he brought us forth by the word of truth, that we should be a kind of firstfruits of his creatures. (James 1:16-18.ESV)

Figure 1. Senses of πλανάω in the New Testament (generated with Logos Bible Software) 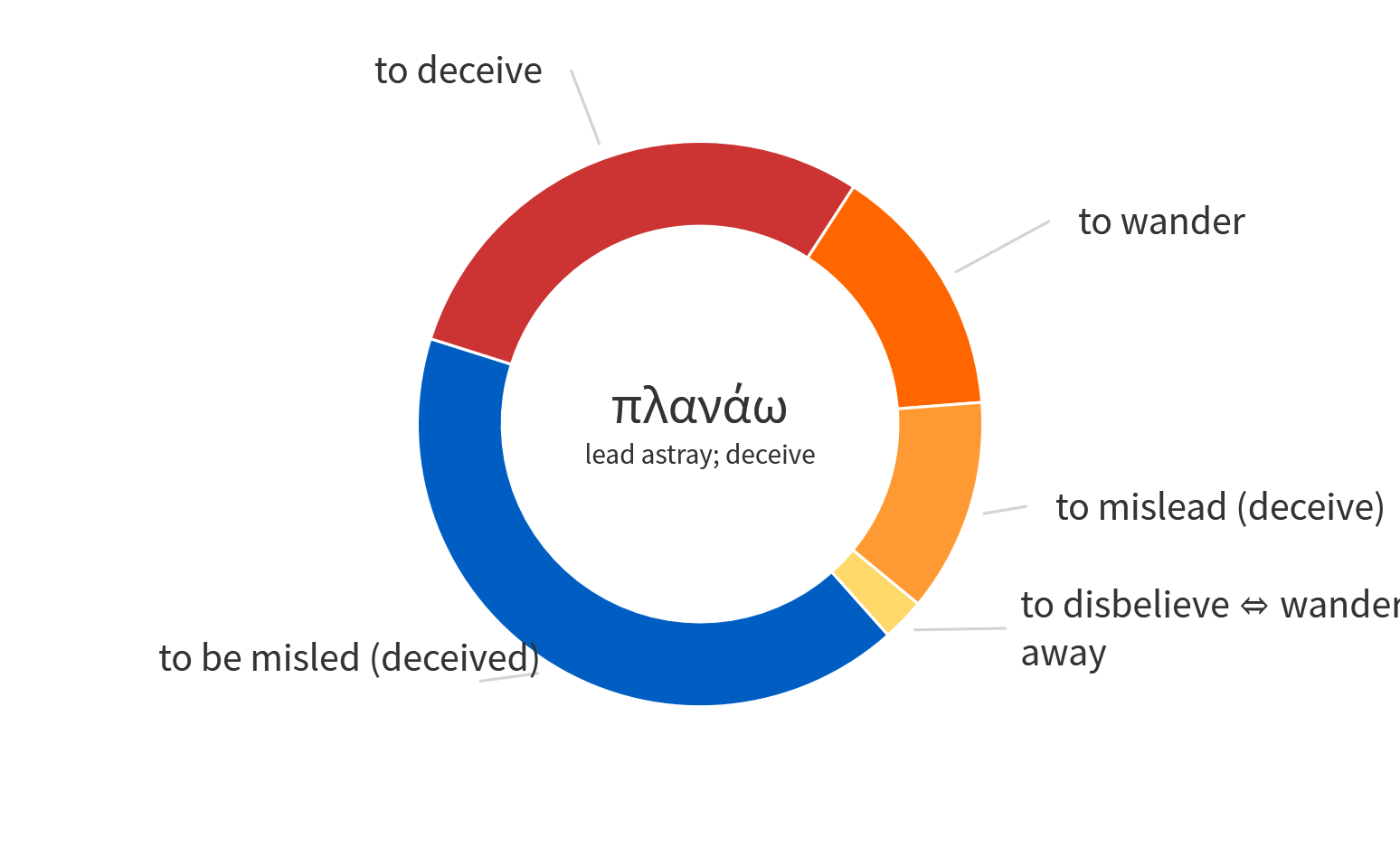 [v16] James begins with the warning, “do not deceive yourselves” (μὴ πλανᾶσθε). Martin labels this a “final call … of vigilance.” The present imperative with µή could imply “stop” being deceived, although nothing in the context necessitates this. The word “deceive” suggests the sense of wandering (just as a “planet” was so named because it looked like a “wandering” star), going astray, or being mistaken.

[v17] The genitive “of lights” (φώτων) is objective, showing God as the Creator. The “Father of lights” appears in a context referring to God’s activity—his showering good gifts on his people. So “Father” is likely to be a verbal noun in this context, which limits our options to two possible genitives: subjective (the Father produced by lights) or objective (the One who fathered the lights). Only the latter makes sense here. God is the one who created the lights of heaven—the sun, moon, and stars.

The verse goes on to affirm that “to send good gifts belongs to God’s unvarying nature.” James uses the qualifier, “in whom there is no variation or shadow of turning” (παρʼ ᾧ οὐκ ἔνι παραλλαγὴ ἢ τροπῆς ἀποσκίασμα), to emphasize the complete lack of change in God’s character. The expression “shadow of turning” (τροπῆς ἀποσκίασμα) uses a descriptive genitive (equivalent to “turning shadow”). The pair of words probably once formed a technical, scientific expression, but that meaning has been lost in Koine Greek. These words, nevertheless, “often refer to astronomical phenomena in the ancient world,” and James almost certainly uses this expression with a similar referent here.

There are two main interpretations. First, one can claim that “God neutralizes the astral powers and gives to man the freedom to decide his own destiny when faced with trials.” Given that he never changes, we are not bound by fate to the changes in the stars. The safer, less ambitious interpretation, which we prefer, reads this verse as declaring the “sovereignty of God over the stars.” Moreover, “while they are always in motion he never changes whether in himself … or in his dealings with his people.” -- Blomberg, C. L., & Kamell, M. J. (2008). James (Vol. 16, p. 74). Grand Rapids, MI: Zondervan.

Not the answer you're looking for? Browse other questions tagged genesis creation heaven or ask your own question.