Does Romans 16:11 reveal the apostle Paul (Saulus) was related to Herod Agrippa?

"Costobarus also, and **Saulus**, did themselves get together a multitude of wicked wretches, and this because they were of the royal family; and so they obtained favor among them, because of their **kindred to Agrippa**; but still they used violence with the people, and were very ready to plunder those that were weaker than themselves."

Was the apostle Paul a Herodian (related to Agrippa)?

Now Paul mentions a man named Herodion. Since this would have been an unusual name in Rome, scholars suggest this may have been either a family member or former slave who served one of the royal lines of the Herods. Since Paul calls him a kinsman or relative, it is assumed the man is Jewish.

Which we find on Wikipedia as (St) Herodion of Patras:

Ἡρωδίων, Ἡρωδιανός, Ῥοδίων […] According to tradition, he was numbered among the Seventy Disciples and became bishop of Patras, where he suffered greatly. After beating, stoning, and stabbing him, they left him for dead, but St. Herodion arose and continued to serve the Apostles.
He was beheaded with Olympas in Rome while they were serving Saint Peter on the same day that St. Peter was crucified.

The key to sort this Herodion into a proper family tree with Herodes in it is Costobarus: 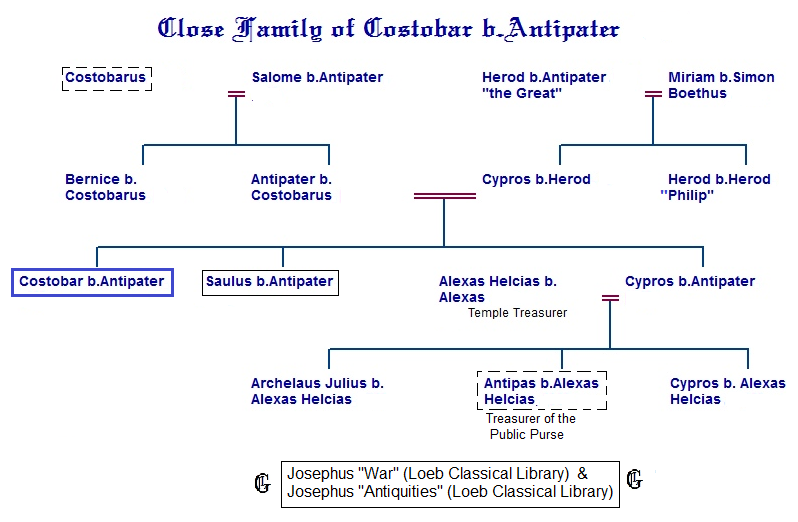 This is then further explained clearly:

Costobar and Saul were royal Herodian brothers, and kinsmen of Antipas ben Alexas, and of Agrippa II. While Josephus does not specify the parents of Costobar and Saul, the name “Costobar” provides a clue: their grandfather was very likely Costobar(us), the second husband of Salome, the sister of Herod “the Great”. “Costobar” is an uncommon name, there being only these two individuals so named in all of Josephus' writings. This means that Antipas ben Alexas was a nephew of Costobar and Saul, through their sister Cypros bat Antipater[21] and Agrippa II was first cousin once removed to them through their aunt Bernice (Berenice), who married Aristobulus ben Herod and are the parents of Agrippa I.

When the Jewish insurrection against Roman rule was gaining momentum, Costobar, Saul and Antipas requested Agrippa II to send assistance to prevent the imminent uprising. The two brothers also were active against the insurgents.

Following the Battle of Beth-horon (25 November 66 AD) in which the Jewish insurgents defeated the Roman general Cestius, Costobar, Saul and Antipas were besieged in the royal palace. Subsequently, Costobar, with his brother Saul, escaped from Jerusalem to re-join Cestius: who dispatched them to Emperor Nero in Archaia, Greece.

Antipas, who had remained in Jerusalem, was arrested by the insurgents, and slain in prison by John ben Dorcus, (i.e. John benTabitha), who was under commission from the “brigands” [zealots].

There is a fringe theory that the Saul in Josephus' writings was the same person as Saul of the New Testament. According to this theory, references to Saul in Acts of the Apostles and some verses of Paul's Epistle to the Romans are believed to reveal connections to the Herodian royal family. In Acts of the Apostles, Saul is named in a list of Christian prophets and teachers in Antioch, following Manaen, who was “brought up with Herod the Tetrarch”, but the verse does not clearly connect Saul to Manaen, or to Herod; In the last chapter of the Epistle to the Romans, Paul sends greetings to a man named Herodion, whom he calls a kinsman (Gk: συγγενῆ). However, Herodion is a not uncommon name in the ancient world, and Paul refers to several others as kinsmen in the same chapter. This term likely meant nothing more than that they were also Jewish. If he were a member of the Herodian family, Saul would indeed have been a Roman citizen. His behaviour prior to his conversion, in which he “made havoc for the church” could be seen as reminiscent of that in which Costobar and Saul “were lawless and quick to plunder … those weaker than themselves”, however, the account of the violent behaviour of Costobar and Saul in Josephus would have post-dated Paul's conversion to Christianity by decades.

The name Herodion came from the Greek word “HERODES” meaning “heroic” (Strong’s Concordance). This was the name of a number of kings of Palestine (Luke 3:1), and it is possible that Herodion was named after one of the kings named Herod. If so, that would most likely make Herodion a Gentile, since it would be very unusual for a Jew to name a child in honor of Herod.

Herodion was the third person Paul mentioned in this chapter as being his kinsman (Romans 16:7). If Herodion was a Gentile, as his name could imply, then Paul would have been referring to him as a brother in the Lord and not a natural blood relative.

7Greet Andronicus and Junia, my countrymen and my fellow prisoners, who are of note among the apostles, who also were in Christ before me.

11 Greet Herodion, my countryman. Greet those who are of the household of Narcissus who are in the Lord.

21 Timothy, my fellow worker, and Lucius, Jason, and Sosipater, my countrymen, greet you.

In this chapter, 6 people are called Paul's countrymen. Herodion is one of them. He is a Christian. He is not a Herodian.

Herod's father was by descent an Edomite

Paul spoke of himself in Philippians 3:

4b If someone else thinks they have reasons to put confidence in the flesh, I have more: 5circumcised on the eighth day, of the people of Israel, of the tribe of Benjamin, a Hebrew of Hebrews; in regard to the law, a Pharisee; 6 as for zeal, persecuting the church; as for righteousness based on the law, faultless.

Was the apostle Paul a Herodian (related to Agrippa)?

"Heriodion" was a common name used by a number of people including several "kings" of Judah in the 1st century. The occurrence of this name does not imply the king but someone possibly named after one of kings called "Herod".

Strongs has this entry:

Herodion, a Christian in Rome, a relative of Paul.

Here, "kinsman" may be either a distant family member or even a fellow-Jew.

Not the answer you're looking for? Browse other questions tagged romans paul historical-interpretation pauline-epistles context or ask your own question.