What is significant, if anything about “This is my Son”?

God the Father makes the point that Jesus is His Son. Why given how few words He uses, does He introduce Jesus as His Son?

“and behold, a voice from heaven said, “This is my beloved Son, with whom I am well pleased.”” ‭‭Matthew‬ ‭3:17‬ ‭

“And a cloud overshadowed them, and a voice came out of the cloud, “This is my beloved Son; listen to him.”” ‭‭Mark‬ ‭9:7‬ ‭

Doesn’t the Bible speak of many sons of God? Is there anything significant with respect to God speaking about His Son in this way? Is this Son distinct from the other sons of God?

The Synoptic gospels had God the Father proclaiming that Jesus is his Son. Matthew agrees with Mark's reading ''This is my Son, the Beloved''. Luke deviates and had a different reading in the second phrase (''my chosen'' instead of ''the beloved''): ''This is my Son, my Chosen''.

Luke 9:35 (NRSV): New Revised Standard Version 35 Then from the cloud came a voice that said, “This is my Son, my Chosen; listen to him!”

Mark 9:7(NRSV): 7 Then a cloud overshadowed them, and from the cloud there came a voice, “This is my Son, the Beloved; listen to him!” 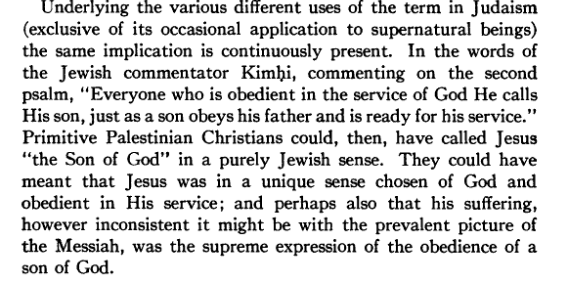 ("Son of God" in Jewish Writings Prior to the Christian Era, Erminie Huntress, 1935)

In the gospel of John, the sonship of Jesus is featured prominently and it was revealed by whom God has sent, namely John the Baptism (John 1:6-9), testifying that Jesus is the Son of God (John 1:34).

Analysis of the Chiastic Structure (A-B-C-D-D-C-B-A):

[94] Codex Vaticanus (sæc. iv.), published in photographic facsimile in 1889 under the care of the Abbate Cozza-Luzi.

[95] Codex Regius--eighth century, represents an ancient text, and is often in agreement with א and B.

This is a great question

There are three times in the New Testament where God the Father speaks out to and about His Son. I would suggest that it is more enlightening to consider the context of the statements (when Jesus was baptized, at the transfiguration, and in John 12:28, just a few days before Jesus' death).

At the baptism of Jesus, the declaration of the Sonship of Jesus is primarily for the benefit of John the Baptist, who was told that he would baptize someone who would be identified as the Messiah by God Himself. Thus He is both identified by God as well as the nature of His identity in that declaration:

John 1:33 "I did not know Him, but He who sent me to baptize with water said to me, 'Upon whom you see the Spirit descending, and remaining on Him, this is He who baptizes with the Holy Spirit.' And I have seen and testified that this is the Son of God." (NKJV)

So in summary, the Father making the declaration on those two occasions (again, three times total that the Father spoke from Heaven to the Son) to the Sonship of Jesus pertained more to the circumstances of the moment; to establish the testimony of John the Baptist, and to establish the superiority of Jesus to the Old Testament.

Jesus' two most common titles in the NT are:

The Son of God

This title serves to emphasize several ideas about Jesus:

Thus, when God calls Jesus His beloved Son, it enabled Jesus to take the title, "Son of God".

APPENDIX: (For completeness) Son of Man

The title "The Son of Man" serves several functions -

The Parable of the Tenants should probably be enlightening here:

33 “Hear another parable. There was a master of a house who planted a vineyard and put a fence around it and dug a winepress in it and built a tower and leased it to tenants, and went into another country. 34 When the season for fruit drew near, he sent his servants to the tenants to get his fruit. 35 And the tenants took his servants and beat one, killed another, and stoned another. 36 Again he sent other servants, more than the first. And they did the same to them. 37 Finally he sent his son to them, saying, ‘They will respect my son.’ 38 But when the tenants saw the son, they said to themselves, ‘This is the heir. Come, let us kill him and have his inheritance.’ 39 And they took him and threw him out of the vineyard and killed him. 40 When therefore the owner of the vineyard comes, what will he do to those tenants?” 41 They said to him, “He will put those wretches to a miserable death and let out the vineyard to other tenants who will give him the fruits in their seasons.”

42 Jesus said to them, “Have you never read in the Scriptures:

“‘The stone that the builders rejected has become the cornerstone; this was the Lord's doing, and it is marvelous in our eyes’?

43 Therefore I tell you, the kingdom of God will be taken away from you and given to a people producing its fruits. 44 And the one who falls on this stone will be broken to pieces; and when it falls on anyone, it will crush him.”

45 When the chief priests and the Pharisees heard his parables, they perceived that he was speaking about them. 46 And although they were seeking to arrest him, they feared the crowds, because they held him to be a prophet.

Verses 37-39 are very clearly talking about Jesus, the son of the house's master (i.e. God), the heir of his house (i.e. God's kingdom). No one else in the parable is described with these attributes. They are unique to the son.

Another Parable that may shed more light is The Parable of the Wedding Feast:

And again Jesus spoke to them in parables, saying, 2 “The kingdom of heaven may be compared to a king who gave a wedding feast for his son, 3 and sent his servants to call those who were invited to the wedding feast, but they would not come. 4 Again he sent other servants, saying, ‘Tell those who are invited, “See, I have prepared my dinner, my oxen and my fat calves have been slaughtered, and everything is ready. Come to the wedding feast.”’ 5 But they paid no attention and went off, one to his farm, another to his business, 6 while the rest seized his servants, treated them shamefully, and killed them. 7 The king was angry, and he sent his troops and destroyed those murderers and burned their city. 8 Then he said to his servants, ‘The wedding feast is ready, but those invited were not worthy. 9 Go therefore to the main roads and invite to the wedding feast as many as you find.’ 10 And those servants went out into the roads and gathered all whom they found, both bad and good. So the wedding hall was filled with guests.

11 “But when the king came in to look at the guests, he saw there a man who had no wedding garment. 12 And he said to him, ‘Friend, how did you get in here without a wedding garment?’ And he was speechless. 13 Then the king said to the attendants, ‘Bind him hand and foot and cast him into the outer darkness. In that place there will be weeping and gnashing of teeth.’ 14 For many are called, but few are chosen.”

Again, verse 2 is very clearly talking about Jesus, the son of the king (God). God is preparing a wedding feast for his Son, and everyone else is referred to as servant/guest. It is therefore clear that Jesus has a privileged position as the Son of God, which does not apply to other sons.

Not the answer you're looking for? Browse other questions tagged jesus synoptics son-of-god or ask your own question.

6
How many days elapsed between Jesus's baptism and his return to Galilee?
1
Does the Gospel of Luke omit John the Baptist baptizing Jesus?
6
What caused the switch in the preaching parameters? Luke 22:35-36
5
When was Jesus ‘in God’s form’? Philippians 2:6
9
(John 3:16) Greek: Only Begotten
2
Who will judge the nations? Jesus or the Father?
2
Did Jesus’ family move up the economic social ladder?
2
Should Luke 2:11 be understood prophetically