A. "receive". "who did receive him...who were born", they received him for the first time. The commncement of a spiritual journey of life with Christ. They received authorisation/exousian to start a new identity as children of God. [A journey can only be started once].

B. "receive". The continuation of that spiritual life,"who believed". Believing not just once but as an ongoing process; believing and receiving over and over again.

In John 1:11 the word 'receive' is applied collectively, to a group of people "who received him not" - His own people (Israel).

The next verse uses the word 'receive' individually - to each individual who did receive him.

However, it was receiving by faith that was involved (which is why those people in verse 11 did not receive Jesus - they had no faith in the power of his name.) Those who had faith in Jesus' name were the only ones who received that power. And it is power that is involved - not a journey. That is gleaned from verse 12 which shows that they became recipients of power, which equates with authority. There was a change in their status, not their location. They became born of God - a spiritual miracle of grace enacted by the Holy Spirit.

In your comments you introduce the idea of starting a journey, then continuing a journey, but the actual verse in question contains no such point. Neither do any of the verses around verse 12.

However, verse 16 uses the word 'received' again and confirms the point that those believers received something that was immaterial, and which had nothing to do with a journey. It says,

"And of his fulness have all we received, and grace for grace."

There is a filling, there is continued grace, and it is all about what happens when Christ is received by the individual, by faith. Ever-fresh grace is given, according to the need. While it is true that this filling is a starting-point and there is continuation, it is not a journey that is being dealt with in these particular verses. Other parts of the New Testament deal with that, but not John 1:11 to 17.

The receiving is an aorist-past distinct happening. This is the main verb.

The believing is in the present tense, continuous and repetitive. This is not the main verb but a participle, subject to the aorist main verb tense.

This is my paraphrase: But to all who did receive him one time and continue to believe in him habitually, he gave the right to become children of God, who were born one time, not of blood nor of the will of the flesh nor of the will of man, but of God.

It refers to the one-time event of a person being born of God. It is the second birth of being born again.

11 He came to His [a]own, and His own people did not [b]accept Him. 12 But [c]as many as received Him, to them He gave the right to become children of God, to those who [d]believe in His name,

Jesus' ministry lasted for three and half years, He preached exclusively to his own people, those that received him were his own people- Israelites and proselyte Jews, (Vs11) Those that responded and exercised faith were blessed to become children of God. (Vs12)

Paul was a zealous Pharisee, their beliefs included human philosophy, traditions, and prejudices and due to this, he persecuted Christians, whilst at the same time believing that he was serving God.(Phil 3:5-6) Paul approved of the murder of Stephen. (Acts 6:13, 7:58)

5 circumcised the eighth day, of the nation of Israel, of the tribe of Benjamin, a Hebrew of Hebrews; as to the Law, a Pharisee; 6 as to zeal, a persecutor of the church; as to the righteousness which is in the Law, found blameless.

After Jesus revealed himself to him (Acts 9, 22, and 26 chapters) and Paul received the accurate knowledge of the truth and God's purpose, He was faced with a decision. Should He persevere to remain and enjoy a position of esteem as a Pharisee, or do whatever is necessary to gain God's approval? Paul made the right choice, He wrote:

16 For I am not ashamed of the gospel, for it is the power of God for salvation to everyone who believes, to the Jew first and also to the Greek.

True faith is based on accurate knowledge of the Bible truths, if we also like Paul believe in human philosophies, beliefs, and traditions, we may not be serving God. After contrasting false beliefs with the true, Moses declared:

9 Know therefore that Jehovah thy God, he is God, the faithful God, who keepeth covenant and lovingkindness with them that love him and keep his commandments to a thousand generations,

Without faith, it is impossible to please God (Hebrews 11:6) so the continuation of that spiritual life, is necessary for those "who believed". Believing not just once but as an ongoing process; believing and receiving over and over again. Faith may be increase by the daily and diligent reading of the Bible and prayer. The Bible has many faithful servants of God that exercised faith, Abraham and his sacrifice of his son Isaak, Noah had great faith for it took him about 40 years to build the ark, and as a preacher of the truth faced much ridicule, also Rahab the prostitute of Jericho that hid the Israelite spies at a risk to her life. Our faith is strengthened when we read about them in the scriptures and tell them to others.

It is the common Greek word for receive, and is aorist, active, indicative, 3rd person singular, apparently referencing a single action. λαμβάνω is used 258 times in 243 verse of the New Testament.

John 1;12 equates "received him" with "believed in his name." To the Hebrew is name equals the person with the name. Hashem (Hebrew for the name) is used in place of the Tetragram (YHWH).

Senses as used in the New Testament (Logos Bible Software) 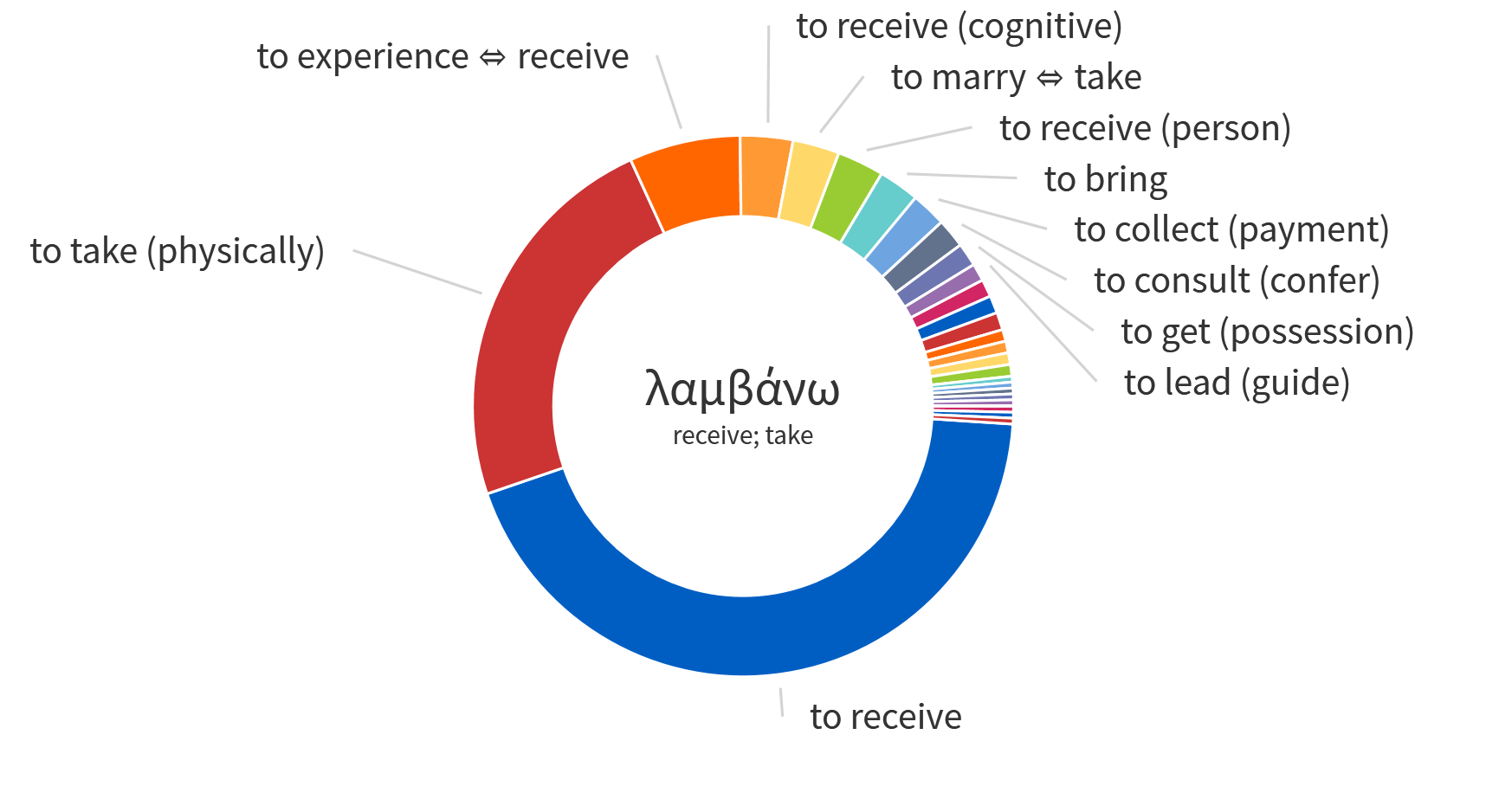 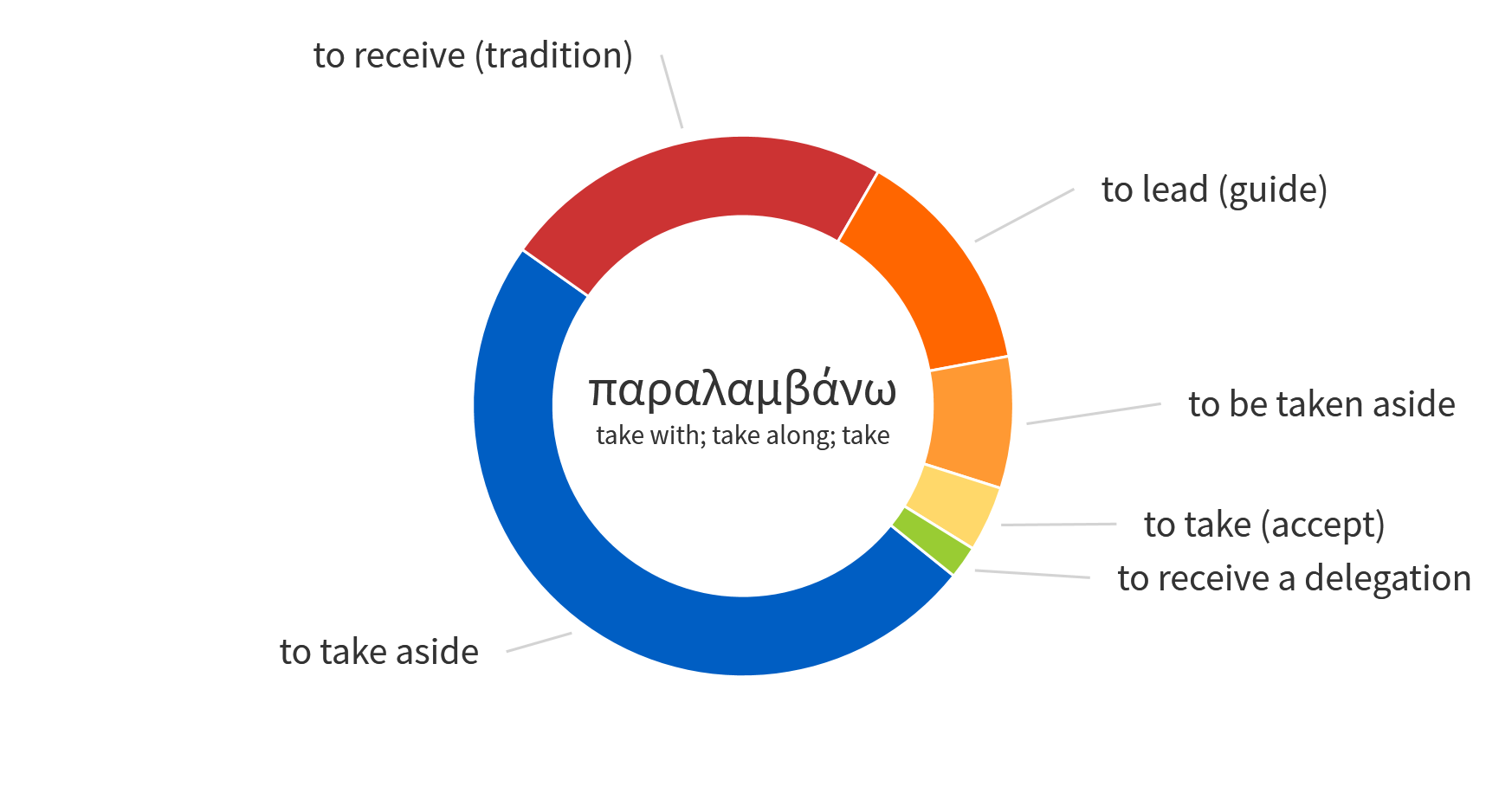 As many as received him (ὁσοι ἐλαβον αὐτον [hosoi elabon auton]). Effective aorist active indicative of λαμβανω [lambanō] “as many as did receive him,” in contrast with οἱ ἰδιοι [hoi idioi] just before, exceptional action on the part of the disciples and other believers. -- Robertson, A. T. (1933). Word Pictures in the New Testament (Jn 1:12). Nashville, TN: Broadman Press.

1:12. That unbelief, however, was not universal. Some received Jesus’ universal invitation. To all who accepted Jesus as the Revealer of the Father’s will and as the Sacrifice for sin, He gave the right to become children of God. The word “right” (exousian) is a needed improvement over the KJV‘s “power,” and “children” (tekna) is better than the KJV‘s “sons.” People are not naturally children of God but can become so by receiving the gift of the new birth. -- Blum, E. A. (1985). John. In J. F. Walvoord & R. B. Zuck (Eds.), The Bible Knowledge Commentary: An Exposition of the Scriptures (Vol. 2, p. 272). Wheaton, IL: Victor Books.

Not the answer you're looking for? Browse other questions tagged john word-study or ask your own question.

21
What types of birth were meant by 'blood', 'will of the flesh', and 'will of man'?
4
Translation questions "right, may, might" as listed below
4
Does John 1:12 identify believers of the past only, or past and present tense believers?
2
Is the "right" to become children of God two different ways people become children of God?
4
In John 8:31–44, does Jesus refer to “the Jews who believed in him” as children of the devil?
0
In John 1:9-13 who is/are the "world" vis a vis "his own"?
0
Does John 1:12 include a reference to the Last Supper?
8
When Jesus states, πρὶν Ἀβραὰμ γενέσθαι ἐγὼ εἰμί (John 8:58), is he speaking of the period when Abraham was called Abram?
3
How might the NIV justify putting "husband" in John 1:13?
2
Does 'panaq' (Proverbs 29:21) have relevance to Galatians 4:1-7 (sonship)?