14  Now the Spirit of the LORD had departed from Saul, and an evil spirit from the LORD tormented him.

May the LORD be with you as he has been with my father.

May the LORD be with you as he used to be with my father.

Didn't Jonathan know that the LORD had departed from Saul?

Here is that sentence in the interlinear, showing grammatical notations for the Hebrew. 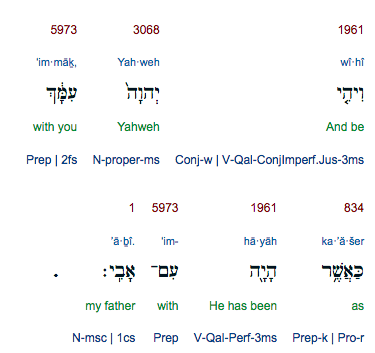 The verb at the start of the sentence is the same verb later translated as "has been," but notice that it is in a different shape.

The first occurrence of H1961 is joined to the "and" conjunction, as is typical of weqatal and wayyiqtol verbs; and this verb is said to be a Qal (simple) verb in the imperfect jussive state. A jussive verb is technically a command, but it is well understood in Hebrew that one does not command God, so this becomes more like a blessing or a wish/desire in this context.

Second Occurrence (That of the Question)

The second occurrence of H1961 is given in perfect form, and lacks the conjunction. In modern English, a perfect verb must always have the verb "to have" as a part of its conjugation. (I say "modern" because older English could use "to be" within the same context, e.g. "The Lord is come" instead of "The Lord has come".)

The translation of "used to be" has exchanged a perfect tense verb for one that is a modal infinitive. I would submit that this is difficult to justify, given the Hebrew.

14
Can we harmonize the two meetings of David and Saul?
8
Why is David's throne established by so much deceit?
9
How can an evil spirit come from God?
8
What does "an evil spirit from the Lord" mean?
1
Why did Samuel think that Saul would kill him given that all of Saul's recorded erratic behavior seems to have happened later?
3
How did Saul find out that David had been anointed to be king?
1
Why does David describe Saul as pleasant in 2 Samuel 1:23?
3
Did King Saul lose his salvation?
1
Is 1 Samuel 22:1-4 record of David asking King of Moab to look after his parents evidence that David had some affinity towards Moabite ethnic group?