Song of Songs 6:9b-10 presents the women of the royal court catching sight of the new bride before the wedding, and being so impressed that they declare her praise and blessedness with the following words (verse 10):

So they express their admiration in the form of a question that starts with "מִי זֹאת", which I guess carries the force of something like

Now look where I'm looking so that I can ask you about the identity of ... (not necessarily as a literal request for you to tell me the person's name, but more rhetorically as a way of expressing my curious wonder at this person).

To clarify, let me describe what I picture as being the approximate sense of this verse under the two interpretations of the grammar. [I use double parallel lines || ... || just to help separate out grammatical components of the complex sentences below, hopefully to slightly smoothen the ease of reading.]

Under the "nonrestrictive clause" interpretation, the sense of the words is something like

Look where I'm looking, so that I can express to you my curious wonder ||at the person who will be within your field of focus when you look where I'm looking|| arising from the wonderfulness of this person's morning-like downward gaze, moon-like beauty, Sun-like purity, and starry-host-like awesomeness.

(A crude translation might be "Lo who is this, who gazes down...")

Under the "restrictive clause" interpretation, the sense of the words is something like

Look where I'm looking, so that I can express to you my curious wonder at the person who can be identified ||from within what your field of focus will be when you look where I'm looking|| by the characteristic of her having a morning-like downward gaze, moon-like beauty, Sun-like purity, and starry-host-like awesomeness.

(A crude translation might be "Lo, who's the woman gazing down...")

I ask because, to me, the latter feels more poetic. (But I'm a modern Western reader, so perhaps that does not mean much.)

As the question indicates, there is a relative clause near the beginning of verse 10 which contains a Hebrew participle. We can examine carefully the grammar of this text with the help of an interlinear which includes the grammatical notations (shown below). 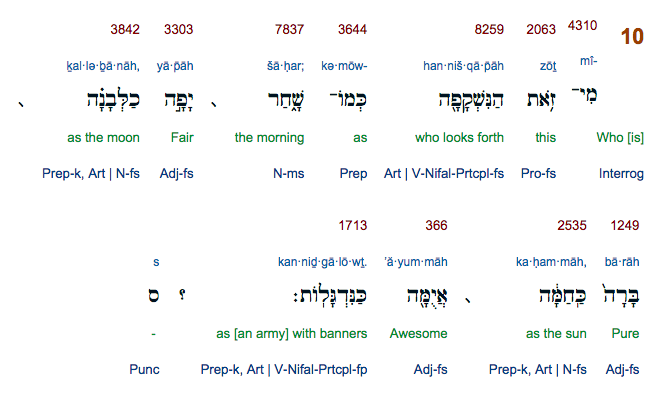 Looking at the Grammar

The initial (independent) clause begins with an interrogative and an implied verb of being. The third numbered word (H8259) is the participle. We know it is a participle because it is a verb but has the definite article attached to it. This addresses the action of the verb as a noun, in similar fashion to how English sometimes uses verb-style -ing words as gerund nouns.

Considering the participle, then, to be used as a noun, we can see that even though the Hebrew relative pronoun (dependent clause marker) is absent (it is optional), it rightfully belongs to the grammar of this expression--which means we indeed have a dependent clause with this participle. That clause marker (asher/אֲשֶׁר) is one of the most common words in the Hebrew Bible, even though it can be omitted sometimes, or just shortened to (שֶׁ). In Song of Solomon 6:10, the word is omitted.

For the sake of readers who may be confused by this, compare the following English sentences, one with the relative pronoun and one without it.

The relative pronoun "that" is not required, grammatically. It is optional, and the meaning and the grammar of the sentence is the same either way. Hebrew is like English in this sense.

In the interlinear grammatical notes for this verse, there is no reference to a relative pronoun with respect to the participle; but the gloss (in green text) renders "who" as part of the literal translation. This is because the relative pronoun, though omitted, is implied.

More about the Dependent Clause

With the participle, then, we have "who looks forth...." This "who" in Hebrew, from the implied "asher," begins the dependent clause.

Unfortunately, Hebrew seems less precise in terms of kinds of relative clauses, leaving much open to interpretation. Hebrew does not, for example, have a clear distinction between restrictive/essential and nonrestrictive/nonessential clauses as does English. English uses commas to do this, and Biblical Hebrew lacked such punctuation. The existence of these forms in Biblical Hebrew is a matter of debate among scholars.

However, the particular usage here paints a descriptive picture.

The sentence begins with the interrogative "who"; which is not defining, but rather querying.

An Example for Comparison

A similar text which uses this poetic style is found in Psalm 1.

Blessed is the man that walketh not in the counsel of the ungodly, nor standeth in the way of sinners, nor sitteth in the seat of the scornful. (Psalm 1:1, KJV)

In this psalm, the dependent clause is descriptive in nature, describing the kind of man who will be blessed and happy. If it were defining, one might presume to find happiness merely by going through the motions of the habits described.

Due to the interrogative, the verse is styled as a question.

Who is she that looketh forth as the morning, fair as the moon, clear as the sun, and terrible as an army with banners? (Song of Solomon 6:10, KJV)

This most closely matches the descriptive usage for the clause because the person thus described is the answer to the question, as opposed to being the definition of a particular person or class of persons. If we were to think of it in terms of a definition, with its application being to "she," would it then apply to every woman?

For the foregoing reasons, I would submit that it is more reasonable to perceive this clause and passage as "describing."

Not the answer you're looking for? Browse other questions tagged hebrew song-of-songs or ask your own question.

3
In Song 2:17 and 4:6, why is it normally assumed that "until the day breathe and the shadows flee" moderates the subsequent, not preceding, clause?
2
Should translations pay more attention to the antithetical parallelism of Prov. 3:34?