No broken bones - spiritual or physical?

This question is BY NO MEANS questioning the accuracy of the scripture, rather a question about the prophecy in 'Psalms 34:20' was fulfilled in a physical manner by Jesus.

A conclusion can be made by the comments and answers below, so dear brothers and sisters please keep reading.

The Bible didn't describe the "technical details" on how Jesus was crucified.

33 But when they came to Jesus and saw that He was already dead, they did not break His legs. 34 But one of the soldiers pierced His side with a spear, and immediately blood and water came out. 35 And he who has seen has testified, and his testimony is true; and he knows that he is telling the truth, so that you may believe. 36 For these things were done that the Scripture should be fulfilled, “Not one of His bones shall be broken.” (NKJV)

When it proceeds to 'John 20', I saw Jesus saying to Thomas:

27 Then He said to Thomas, “Reach your finger here, and look at My hands; and reach your hand here, and put it into My side. Do not be unbelieving, but believing.” (NKJV)

I tried to touch my hands and wrists, I couldn't find any possible place where you can nail and fix firmly onto the cross without breaking a bone, same with the feet. How could a crucifixion be done without breaking the hand bones of feet bones? Am I missing something here?

With Psalm 34 (the prophecy John mentioned), the context seemed to have more of a spiritual meaning instead of a physical meaning:

15 The eyes of the Lord are on the righteous, And His ears are open to their cry. 16 The face of the Lord is against those who do evil, To cut off the remembrance of them from the earth.

17 The righteous cry out, and the Lord hears, And delivers them out of all their troubles. 18 The Lord is near to those who have a broken heart, And saves such as have a contrite spirit.

19 Many are the afflictions of the righteous, But the Lord delivers him out of them all. 20 He guards all his bones; Not one of them is broken.

But 'John 20:36' seems to suggest the prophecy was fulfilled in a physical manner? If the prophecy is meant to be fulfilled physically, how could a crucifixion without breaking bones be possible?

The problem is with the popular depictions of nails through Jesus's palms. That wouldn't hold the weight of a body for long before the flesh would tear loose.

The next time you eat a chicken wing (a flat, not a drumette), look at how the two bones join at the wrist with a gap between them. That is where the nail would be placed, for maximum support and maximum pain.

Here's part of something I wrote a few years ago:

The Romans were an incredibly efficient society, concerned about its long-term future.

Whenever they did anything, the Romans did so as efficiently as possible. Designs were functional, not ornate. A comparison of contemporary Roman and Greek architecture shows the Greeks creating fluted columns, elaborately carved capitals, and various decorative features, with the Romans having a very utilitarian style, everything plain and simple, with all shapes being rectangles or circles.

Crucifixion wasn't invented specifically for Jesus; it was a very common method of torture and execution throughout the Roman Empire. There were times when literally thousands of people were crucified at a time, their tortured bodies hanging in one long row along the side of a heavily travelled road.

The crosses typically depicted throughout the modern Christian world would have been far too large, far too heavy, and far too complicated for the Roman army to use. Fitting and binding the two pieces together would have required a significant amount of work. For the Romans, form followed function, and for this purpose there was simply no need for a complicating crossbar.

One simple vertical pole was all that was needed.

Similarly, there is no way that Roman soldiers would have put nails through a prisoner's palms. The weight of the body could have ripped the nails up through the hands, and remounting them would have been too much trouble. The modern concept of using rope to support the weight would also have been an added complication, not to mention that devising something to compensate for a poor basic design would have been seen as inefficient.

A single nail, driven between the wrist bones of the prisoner's crossed hands would have been far more efficient. The nail would never tear out, and the pressure of the nail on the nerves in the end of the wrist (like banging one's funny-bone) would have added to the torture. One could relieve that pressure by supporting one's weight by the legs, but it would be very tiring to do so. Yet relaxing the legs would cause excruciating pain. (The word "excruciating" has the same origin as "crucifixion".) The mental stress of deciding between leg support and wrist pain makes the crucifixion process even more effective in terms of torture.

Yes, there were times when fancy elaborate devices were used to crucify special people or used at special events, but it was only to enhance the entertainment value. One king, for instance, was crucified on a specially constructed "X"-shaped cross. But for the vast majority of people, a simple pole with a single nail through the crossed wrists and one in each ankle got the job done.

While some translations (e.g. New World Translation) use expressions like "torture stake", most English translations of the Bible refer to Jesus's execution device as a "cross". The original Greek word is "stauros" (σταυρός), which simply means an upright wooden stake, and has no connotation of having a crossbar.

Jesus, or anyone else, couldn't possibly have carried anything like the large and often elaborate cross we see depicted in churches, books, and films. Nor was he forced to carry only the crossbar, as some people now rationalize the event. The same Greek word is used for what he carried as is used for the execution device.

Even if the Romans had thought of Jesus as deserving special treatment because of who he was (which they didn't), they obviously didn't bother. Jesus was crucified alongside two other criminals, with nothing mentioned indicating that his stake was any different from the other two.

The soldiers were asked to break the legs of the three criminals so that they would die much sooner allowing them to be buried before the Sabbath began at sunset. The leg breaking would speed up the death because the entire body weight would then be on the single nail between the crossed wrists. The pain would be intense and continuous, and any false hope provided by leg support would be gone.

For brothers and sisters who are wondering about a similar question - after looking at the comment from Steve Taylor and the answer Ray Butterworth (Thanks guys!), I would conclude my own question:

The prophecy fulfilment mentioned in 'John 20:36' was fulfilled by Jesus in a physical manner.

If you wonder how crucifixions were done without hand or feet bones being broken, here are two diagrams for you below (Source: Google Images). 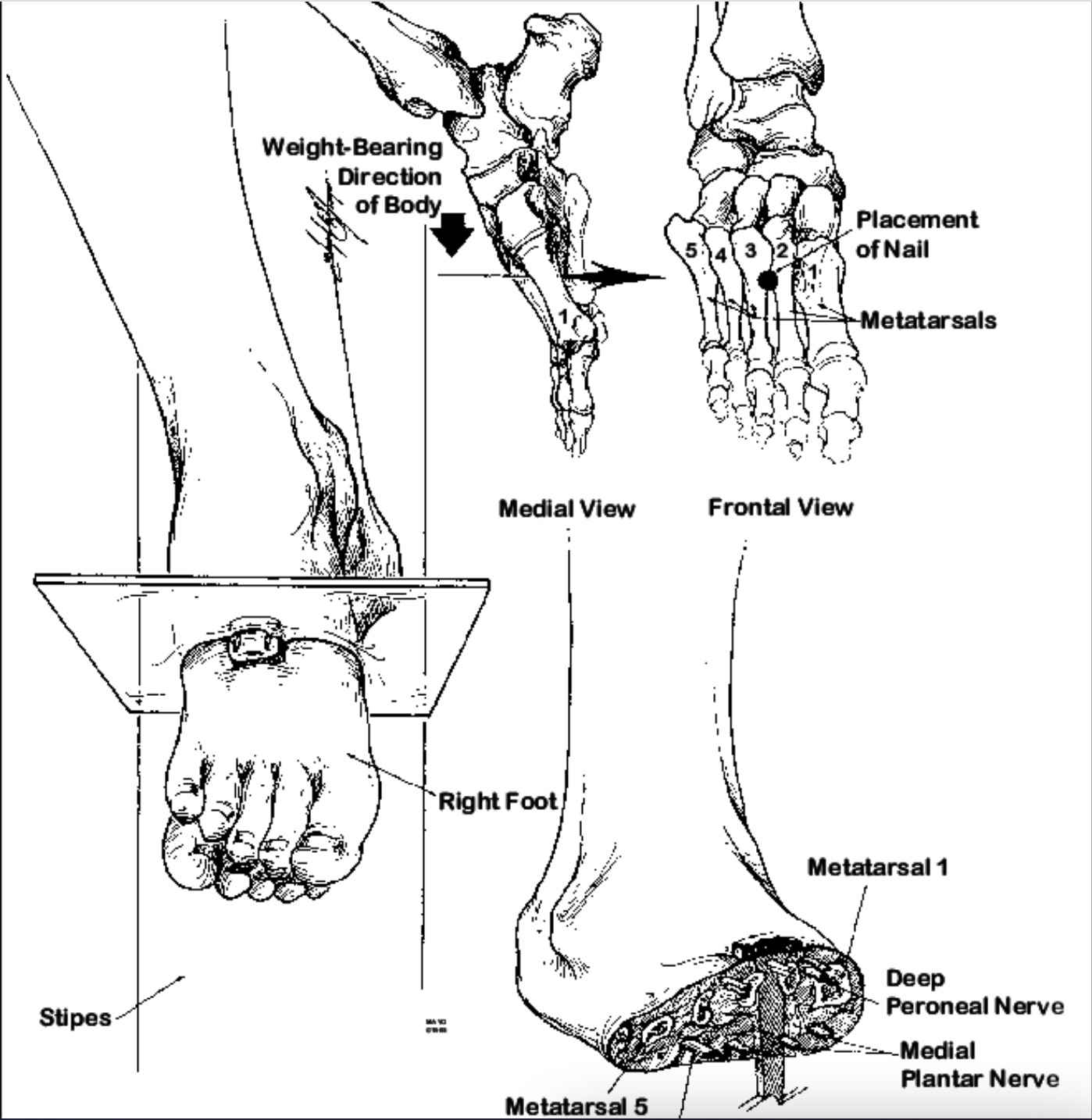 Here is a helpful picture of the hand showing the bones. 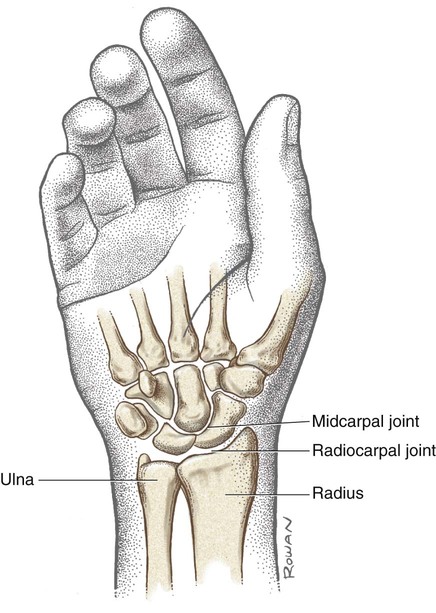 For much more information, see the copious data on the web such as https://en.wikipedia.org/wiki/Crucifixion

Not the answer you're looking for? Browse other questions tagged john jesus prophecy crucifixion or ask your own question.

9
Psalm 34:20 applied to Jesus' crucifixion
9
Did Jesus have actual marks or holes in his hands and side after his resurrection? John 20
3
Looking Me Whom They Have Pierced - Zechariah 12:10
3
John 20:27 - doubting Thomas. But, was Jesus recognizable?
0
In Psalm 27:6 is there a historic or prophetic reason David is confident that "now" is when he will triumph?
4
Who is the angel in Revelation 11:1-8?
7
Does the sixth day before the Passover in John 12:1 rule out a Friday crucifixion day?
6
What does the risen Jesus mean, 'for a spirit does not have flesh and bones as you see I have'. Luke 24:39?
3
When Jesus tells Thomas to reach out his hand and 'put it into' his side, was he wearing clothing covering his side?