38 For the cloud of the LORD was above the tabernacle by day, and fire was over it by night, in the sight of all the house of Israel, throughout all their journeys.

For the cloud of the Lord was upon the tabernacle by day, and fire was on it by night

for the cloud of Jehovah [is] on the tabernacle by day, and fire is in it by night

Which translation is best? I'm particularly interested in the connection with What was the pillar of fire and cloud?.

Compared to English, Hebrew has very few prepositions, and each preposition has a large number of English targets.

The preposition used here is ְּב or "b". The composite word is בּוֹ, or "bo", but only the first letter, "b" is the preposition. Attached to the preposition as a suffix is the pronoun "H'u" (3rd person masculine singular) which acts as a pronomial suffix, and the combination of "b" + "h'u" is turned into the compound "bo", which has the semantic range of:

The preposition "b" occurs over 15,000 times in the bible and has hundreds of different english translation targets, but "in/on/with" are the most common: 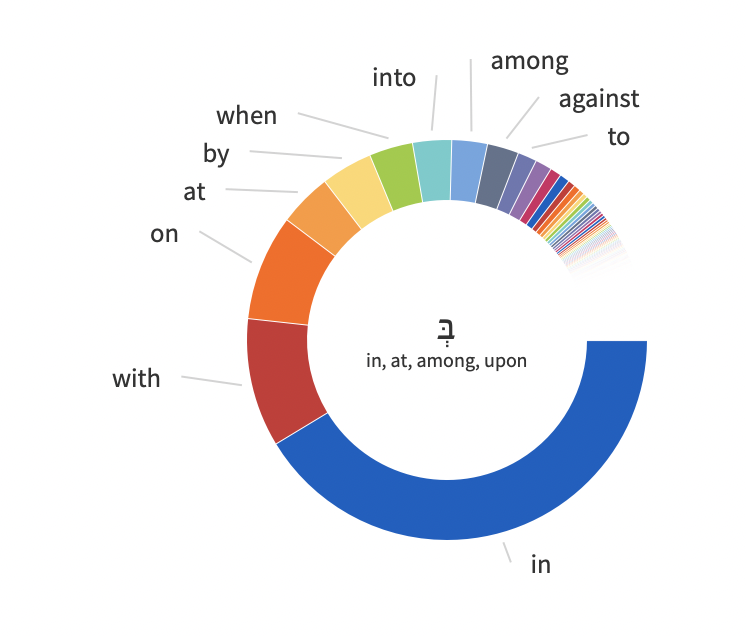 That is, "b" should be viewed as a general connector attaching one thing to another, with the idea of the smaller being attached to the larger, and thus one can say that the food is in the stomach or the hair is on the head, etc. And then it is translated based on context and the requirements of English, which demands much more precision than does Hebrew, due to the fact that English has many more prepositions each with a narrower semantic range than what is found in Hebrew.

For example, just looking at Psalm 119, the preposition "b" is used 26 times. Here is a sample of the english targets (using the hyper-literal LEB):

It should be clear now that there is ambiguity as to how to translate "b". Here are different translations:

To understand the translation choices here, each translator has to think about the following:

So when translators go through the above issues, they will tend to reach different conclusions and thus choose different targets.

The translations "in, over, on" are translating בּ֑וֹ, which is the Hebrew preposition ב and the 3rd masculine singular ending meaning it, which refers back to the Tabernacle. The Hebrew preposition ב has a range of meanings the Brown Driver Briggs lexicon http://www.ericlevy.com/revel/bdb/bdb/main.htm gives the following possible translations: in, among, within, into, upon, at, by, on. There are more but the basic idea is in, but also used in derived meanings such as on or over.

Not the answer you're looking for? Browse other questions tagged exodus or ask your own question.

4
What was the pillar of fire and cloud?

2
Could Isaiah 6:1-2 be an allusion to Exodus 33:20?
2
Who wrote the second set of tablets in Exodus 34:27 & Deutoronomy 10:1-4?
2
The forty days and forty nights of Moses story in Deuteronomy 9:18?
1
In 1 Corinthians 10:1 is the cloud that covered the cloud that led and vice versa?
6
Did Moses disband the initial group of leaders which he had appointed in Exodus 18?
0
In Exodus 6:2 through 9:35 did the Nile "turn to blood" or experience a "Red Tide" algal bloom?
2
What does "my name is with him" mean in Exodus 23:21?
3
Leaving houses before morning
1
Could the radiance in Moses face be linked to the golden calf incident and the second set of tablets?
4
What was the pillar of fire and cloud?