Did Job actually use the Tetragrammaton in Job 1:21?

and said: “Naked I came from my mother’s womb, and naked I will depart. The LORD [Yahweh] gave and the LORD has taken away; may the name of the LORD be praised.”

I thought the Tetragrammaton was only revealed later to Moses in Exodus 3:

13Moses said to God, “Suppose I go to the Israelites and say to them, ‘The God of your fathers has sent me to you,’ and they ask me, ‘What is his name?’ Then what shall I tell them?”

15God also said to Moses, “Say to the Israelites, ‘The LORD [Yahweh], the God of your fathers—the God of Abraham, the God of Isaac and the God of Jacob—has sent me to you.’

2 God also said to Moses, “I am the LORD. 3 I appeared to Abraham, to Isaac and to Jacob as God Almighty, but by my name the LORD I did not make myself fully known to them.

Did Job actually use the Tetragrammaton in Job 1:21?

Looking at the original Hebrew text, yes Job did use the Tetragrammaton not just once, but three times: 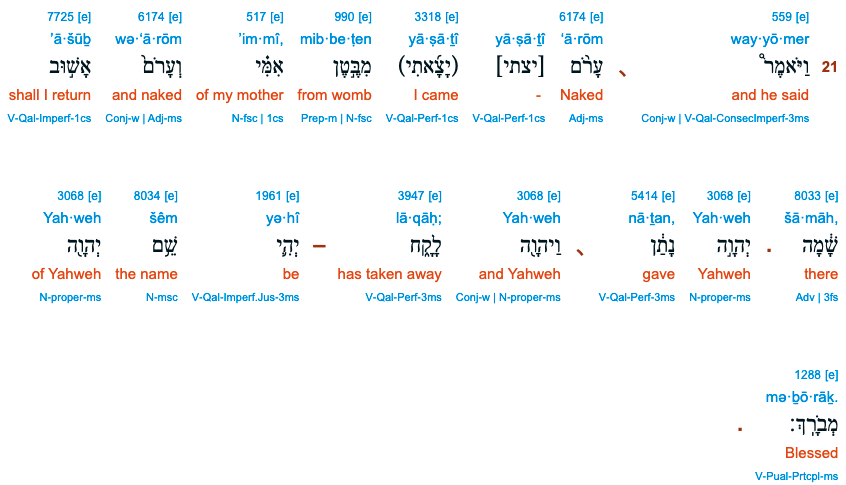 When did the events of the book of Job take place?

The book "All Scripture Is Inspired of God and Beneficial" tells us when:

The time of Job’s trial was long after Abraham’s day. It was at a time when there was “no one like [Job] in the earth, a man blameless and upright.” (1:8) This appears to be the period between the death of Joseph (1657 B.C.E.), a man of outstanding faith, and the time that Moses entered upon his course of integrity. Job excelled in pure worship at this period of Israel’s contamination by the demon worship of Egypt. Furthermore, the practices mentioned in the first chapter of Job, and God’s acceptance of Job as a true worshiper, point to patriarchal times rather than to the later period from 1513 B.C.E. on, when God dealt exclusively with Israel under the Law. (Amos 3:2; Eph. 2:12) Thus, allowing for Job’s long life, it appears that the book covers a period between 1657 B.C.E. and 1473 B.C.E., the year of Moses’ death; the book was completed by Moses sometime after Job’s death and while the Israelites were in the wilderness.​—Job 1:8; 42:16, 17. (bold mine)

As the writer of Exodus and the whole Torah, Moses was well acquainted the God's name. The Tetragrammaton can also be seen in verses 2, 4, and 7 of Exodus chapter 3.

The first occurrence of the Tetragrammaton is found in Genesis 2:4:

These are the generations of the heavens and of the earth when they were created, in the day that Jehovah God made the earth and the heavens,–Divine Name King James Version (bold mine)

The first time the divine name is spoken is by Eve at Genesis 4:1:

And Adam knew Eve his wife; and she conceived, and bare Cain, and said, I have gotten a man from Jehovah.––Divine Name King James Version (bold mine)

There are several matters in this question, so let be separate them.

The tetragammaton appears no less than three times in the text of Job 1:21:

3. What was revealed to Moses?

Thus, it is quite apparent that the tetragrammaton was well-known to people even from the garden of Eden. So, what was revealed to Moses at the burning bush in Ex 3? Note the record that we have:

Not the answer you're looking for? Browse other questions tagged exodus job or ask your own question.

14
Exodus 6:3 - what is the significance of God's different names in the Tanakh?
14
Why does God say he only revealed his name, Yahweh, to Moses?
5
Who was Moses supposed to say sent him, "Ehieh" or "Yahweh"
4
Tetragrammaton originally יהיה (yihayah) (3PersMascSing 'exist, be') and subsequently the nominal form (יהוה) (the Being)?
0
Why the second דֹּֽר in Exodus 3:15?
2
In Exodus 3:15 what does God mean by "memorial"?
1
When does the LORD send an angel to replace Him to lead the Israelites?
7
Did Moses understand that there was the resurrection of the dead from Exodus 3:6?
2
Exodus 33:1 - What does it mean when God said to Moses, the people whom you have brought up out of Egypt..?