Exodus 32:3-5 a feast to YHWH! Was the calf meant to symbolize God?

3 And all the people brake off the golden earrings which were in their ears, and brought them unto Aaron.

4 And he received them at their hand, and fashioned it with a graving tool, after he had made it a molten calf: and they said, These be thy gods, O Israel, which brought thee up out of the land of Egypt.

5 And when Aaron saw it, he built an altar before it; and Aaron made proclamation, and said, To morrow is a feast to the LORD.

Was the golden calf a way to put an image on God? Aaron has certainly not turned his back knowingly by proclaiming this feast to YHWH the following day, but more in their deeds they did so!?. 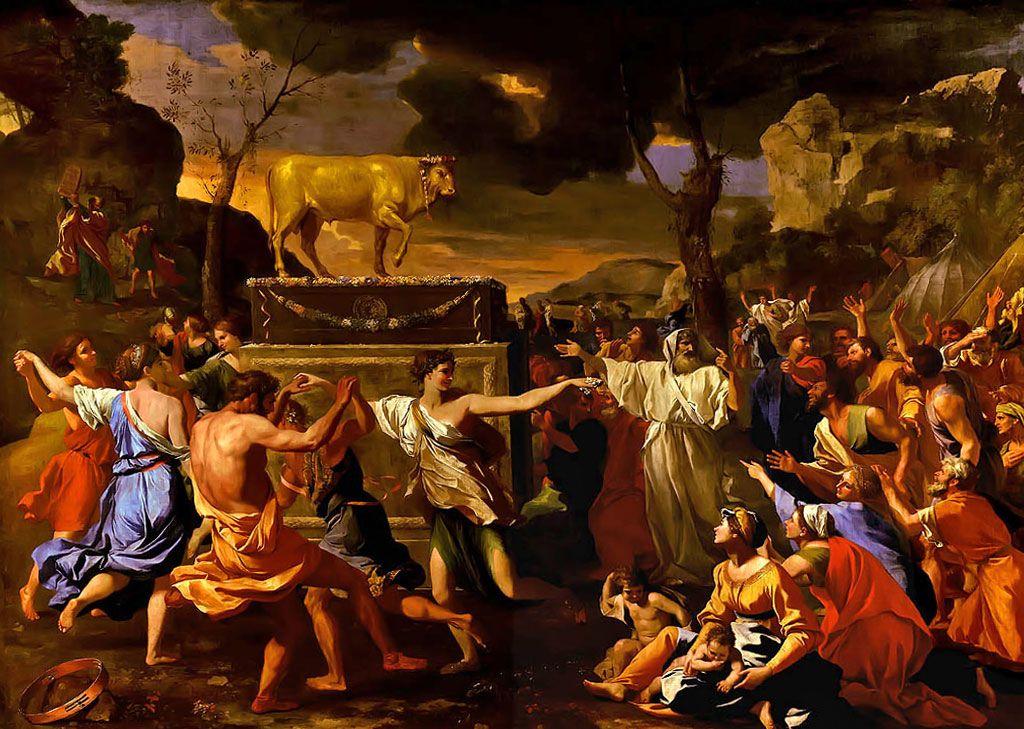 1When the people saw that Moses was so long in coming down from the mountain, they gathered around Aaron and said, “Come, make us gods a who will go before us. As for this fellow Moses who brought us up out of Egypt, we don’t know what has happened to him.”

2 Aaron answered them, “Take off the gold earrings that your wives, your sons and your daughters are wearing, and bring them to me.” 3So all the people took off their earrings and brought them to Aaron. 4He took what they handed him and made it into an idol cast in the shape of a calf, fashioning it with a tool. Then they said, “These are your gods, Israel, who brought you up out of Egypt.”

28 After seeking advice, the king made two golden calves. He said to the people, “It is too much for you to go up to Jerusalem. Here are your gods, Israel, who brought you up out of Egypt.” 29One he set up in Bethel, and the other in Dan. 30And this thing became a sin; the people came to worship the one at Bethel and went as far as Dan to worship the other.

Aaron used the calf to symbolize the LORD, Exodus 32:

5And when Aaron saw it, he built an altar before it; and Aaron made proclamation, and said, To morrow is a feast to the LORD.

But this was misleading because it violated Exodus 20:

1 And God spoke all these words:

2“I am the Lord your God, who brought you out of Egypt, out of the land of slavery.

3“You shall have no other gods before me.

4“You shall not make for yourself an image in the form of anything in heaven above or on the earth beneath or in the waters below.

Was the golden calf a way to put an image on God?

Yes, but it was wrong to do so. Aaron should have known better.

OP: Aaron has certainly not turned his back knowingly by proclaiming this feast to YHWH the following day, but more in their deeds they did so!?.

Aaron had started the process of deviating from the one true God. If Moses had not intervened, they would have followed the same path of Jeroboam who caused the Southern Kingdom of Israel to sin for centuries afterward.

Yes. | In Exodus 32:1-5, Aharon agreed to sculpt a symbolic elohim (shaped like the egyptian obelisk icon for Pharaoh's strong authority) to represent the [authority of YHVH] - replacing the role of Moshe.

[Aharon explained this] when Moshe returned from his supposed death on Mount Horev in [Exodus 32:23-24].

The Golden Calf was created to replace Moshe as an elohim (authority) of YHVH, for Aharon.

Not the answer you're looking for? Browse other questions tagged hebrew exodus or ask your own question.

9
In Exodus 32:20, why did Moses make the Israelites drink the ground calf & water mixture?
4
In 1 Corinthians 10:27, is the apostle Paul alluding to Exodus 34:15 concerning an idolatrous feast to a heathen god?
8
Why does Yhwh instruct Moses to leave him alone in Exodus 32:10?
1
In Psalms 106:19-20, why does the text say “their glory”?
5
Why was Aaron not punished for making the golden calf? (Exodus 32:1-4)
1
Did Moses beseech God twice?
0
Is YHWH of Israel the counterpart of Pharoah of Egypt in Exodus 5:1?
2
Why was the punishment of refusal to enter Canaan seemingly more severe than that of the golden calf?
4
Was Jonah's success in Nineveh improved by having tried to run away?