For thou wilt not leave my soul in hell; neither wilt thou suffer thine Holy One to see corruption.

For You will not leave my soul in Sheol, Nor will You allow Your Holy One to see corruption.

because you will not abandon me to the realm of the dead, nor will you let your faithful one see decay.

Which is the best translation in the context of Psalm 16:10?

šᵊ'ôl / Sheol - designation for the abode of the dead. This ( thought to be subterranean) location is a temporary ‘holding place’ for the spirits/souls of man after man dies.

Equivalent to the New Testament ‘hadēs’ which is [unfortunately] often translated as ‘hell’. Not that the word ‘hell’ is necessarily incorrect, but rather our common understanding of what ‘hell’ is gives an incorrect ‘picture’ of Sheol/Hades. Many see ‘hell’ as the final resting place for unbelievers, where as this is actually meant to be ‘the lake of fire’ (Rev 20:14). ‘Hades’ (hell) is thrown into this (lake of fire) ‘in the end’.

Sheol has two separate compartments ... one held the Old Testament saints. And it was this that David was alluding to. (Sheol, colloquially known as Abraham’s bosom, Paradise - but never ‘hell’). The other was for those considered ‘unrighteous’. And the two were separated...

LUKE 16:26 And besides all this, between us and you there is a great gulf fixed, so that those who want to pass from here to you cannot, nor can those from there pass to us.’

Summary - Sheol was a temporary location for the souls/spirits that through death [separation] of the physical body, needed a ‘location’ to go to, until (the next step)

In Hebrew Sheol שאול (H7585) is the "abode of the dead," the "underworld," and commonly translated hell, grave or "pit. The etymology of the word Sheol is uncertain, even the correct spelling is uncertain שאול or שאל (mostly spelled שאול but sometimes שאל). 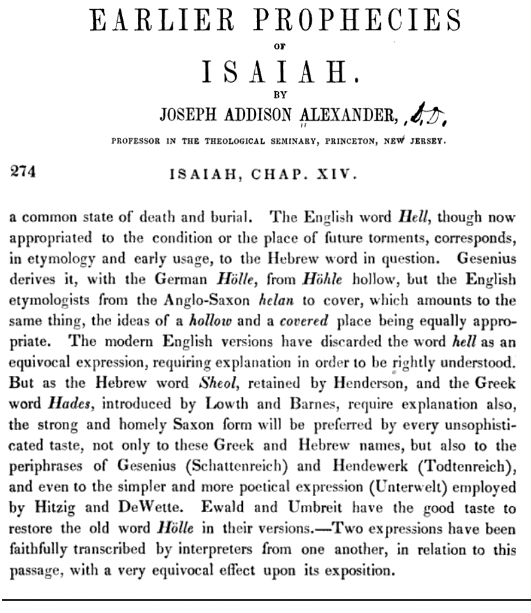 NIV has the meaning of that place in Hebrew Sheol שאול (H7585) in Greek we have Hades ᾍδης Lit Aḯdēs (G86). Sheol, abode of the dead and Hades, the underworld are same location two different languages, therefore NIV's the realm of the dead is a proper translation of the word.

because you will not abandon me to the realm of the dead, nor will you let your faithful one see decay. (Psalm 16:10 - NIV)

They have all the same meaning you also LXX ᾅδην (aḯdēn) Hades.

And the לשאול lai-Sheol = to Sheol, to Hell

Is it hell, sheol, or realm of the dead? Or, could it just mean ‘the grave’? In the original language, it is שאול

It seems that there were two words in Hebrew that dealt with the place commonly known as sheol. The other Hebrew word was 'qe’ber' (pronounced ke-boo-raw, I think). That is the word that simply meant the grave, where corpses rotted, and where there was no conscious awareness. However, the other Hebrew word 'sheol' was where the spirits of the dead went to. Qe’ber was viewed as the entrance into the realm of the dead, so it was directly connected to it, but the entrance was only where corpses were deposited and left to rot. The invisible spirit part of the deceased proceeded into the realm of the departed dead – sheol. In English, sheol is often translated as hell, but sometimes attention is not paid to this word qe’ber, when it is only the grave that is being referred to.

Many Jewish people do not believe in hell, others do (just as in Christianity some Christians believe in hell as a place of torment, and others do not). But history holds records about various ideas on the after-life in Jewish thought as in "The Life And Times of Jesus The Messiah" by Alfred Edersheim (1971) Appendix XIX, On Eternal Punishment, according to the Rabbis and the New Testament" (see vol. II Book V ch. vi):

"... For the views held at the time of Christ, whatever they were, must have been those which the hearers of Christ entertained; and whatever those views, Christ did not, at least directly, contradict or, so far as we can infer, intend to correct them... the first Rabbinic utterances come to us from the time immediately before that of Christ, from the Schools of Shammai and Hillel. The former arranged all mankind into three classes: the perfectly righteous, who are 'immediately written and sealed to Gehenna'; and an intermediate class, 'who go down to Gehinnom, and moan, and come up again,'... The careful reader will notice that this statement implies belief in Eternal Punishment on the part of the School of Shammai... "Substantially the same, as regards Eternity of Punishment, is the view of the School of Hillel... In regard to sinners of Israel and of the Gentiles it teaches, indeed, that they are tormented in Gehenna for twelve months, after which their bodies and souls are burnt up and scattered as dust under the feet of the righteous; but it significantly excepts from this number certain classes of transgressors 'who go down to Gehinnom and are punished there to ages of ages.'...But since the Schools of Shammai and Hillel represented the theological teaching in the time of Christ and His Apostles, it follows that the doctrine of Eternal Punishment was that held in the days of our Lord, however it may afterwards have been modified... The doctrine of the Eternity of Punishments seems to have been held by the Synagogue throughout the whole first century of our era."

This is confirmed in "Josephus' Discourse to the Greeks Concerning Hades" as in "The Works of Josephus" translated by William Whiston, 1980, page 637:

"Now as to Hades, wherein the souls of the righteous and unrighteous are detained, it is necessary to speak of it. Hades is... a subterraneous region... angels are appointed as guardians to [souls] who distribute to them temporary punishments."

Then it goes on to describe another part called "the Bosom of Abraham" with a chaos, deep and large, fixed between it and the place of darkness. Souls are in either one part, or the other, awaiting the resurrection of all men from the dead.

Thus, when we read what Jesus said about the rich man who died then found himself in hell, in torments, and to Lazarus dying and finding himself in the Bosom of Abraham, in bliss, it all makes perfect sense. Jesus was speaking to their beliefs about punishment after physical death, or to bliss in the Bosom of Abraham (Luke 16:19-31). Jesus did not say those beliefs were wrong. He went right along with them. The Greek word for Hades links into this subject as Psalm 16:10 is also quoted in the New Testament, in Acts 2:27--"Because thou wilt not leave my soul in hell (Hades), neither wilt thou suffer thine Holy One to see corruption." These two passages (Psalm 16:10 and Acts 2:27) demonstrate that the Old Testament term "Sheol" is equivalent to the New Testament term "Hades."

Conclusion: The Hebrew sheol is correctly translated as hell, and could equally correctly be given the non-literal translation, ‘realm of the dead’. But as it is the soul [Hebrew nephesh] that is being spoken of, and not the body, it cannot be translated as ‘the grave’. Psalm 16:10 does not refer to a body corrupting in the grave. It is a soul in sheol (or, hell, or the realm of the dead).

The meaning of "she'ol" is controversial because of it relationship to the doctrine of anthropology and after-life experiences. I note the following uses of the word "she'ol"

Note the comment of BDB and its meaning as simply the grave, the underworld, or the realm of the dead.

The NIV never uses the word "hell" in the OT but always prefers, "realm of the dead", "the grave", or similar. I agree.

Not the answer you're looking for? Browse other questions tagged hebrew psalms death or ask your own question.