The focal word here is H2617, checed, חֵסֵד. It is a versatile word with many meanings.

I said, “I beseech You, O LORD God of heaven, the great and awesome God, who preserves the covenant and lovingkindness for those who love Him and keep His commandments

The Hebrew does not say "He guards The-Covenant and-Kindness" -- this is a good example of why you can't do a direct word-for-word substitution and call that a translation.

One particular issue with Hebrew is that it has a much smaller vocabulary than English, so while Hebrew may use the same word to express three different senses, in English there may be three different words to use. Or more, and it would be an incorrect translation to use the same english word in all the situations, so there is not a single english word that maps to each Hebrew word.

In this specific case, the verb at issue is shamar, which has as a gloss "guard, protect, keep, obey" and that's just for starters.

But how it is translated in English requires choosing different English words based on the context.

For example, in Genesis 17.9, a correct translation is "Thou shalt keep my covenant", not "thou shalt guard my covenant", although if you did say "guard", most english speakers would, with some effort, be able to figure out you were trying to say "keep".

Also in Exodus 10.28, a correct translation of "shamar" is "Be careful", as in "Be careful not to see my face". Again, you would not translate this as "guard" even though if you did use "guard", most people would, with some effort, figure out you meant "Be careful".

So in general, translating cannot be reduced to a word-for-word substitution. It is very dangerous to take a basic knowledge of Biblical Hebrew and start "improving" translations done by teams of scholars.

The second tricky word here is "chesed", which again has a broad semantic range. The Theological Dictionary of the Old Testament has a 10,000 word article on chesed, dividing interpretation into broad categories, which I will summarize here:

In view of the impressive evidence for the mutuality of ḥeseḏ, we may venture the conjecture that even in cases where the context does not suggest such mutuality it is nevertheless implicit, because we are dealing with the closest of human bonds. In the case of Abraham and Sarah (Gen. 20:13) as well as Orpah/Ruth and Mahlon/Chilion (Ruth 1:8), it is the relationship between husband and wife; in the case of Israel and Joseph (Gen. 47:29), it is father and son; in the case of Laban/Bethuel and Isaac (Gen. 24:49), it is next of kin; and in 2 S. 16:17, it should be noted that Hushai’s relationship to David is called that of a “friend” (rēaʿ). e. Finally, it is worth noting that, of the passages just discussed, Gen. 24:49; 47:29; Josh. 2:14 use the phrase ḥeseḏ weʾemeṯ. This expression is generally (and correctly) understood as an hendiadys, in which the second noun ʾemeṯ (→ אמן ʾāman) emphasizes the permanence, certainty, and lasting validity of the demonstration or promise of ḥeseḏ. The same phenomenon is expressed by the phrase ʿaḏ-ʿôlām in Jonathan’s request that after his death David will not cut off his ḥeseḏ from the house of Jonathan for ever (1 S. 20:15). That demonstration of ḥeseḏ includes the element of ʾemeṯ is also shown by the use of šqr, “deal falsely,” as an antonym in Gen. 21:23.

a. Before we can summarize our observations, the other occurrences of ḥeseḏ in secular usage should be mentioned, to round out the picture that has been sketched. The active nature of ḥeseḏ is underlined by the use of the verb ʿāśâ in Zec. 7:9 and Ps. 109:16. Similarly, the pl. ḥasāḏîm in 2 Ch. 32:32; 35:26; Neh. 13:14 refers to the “good deeds” of Hezekiah, Josiah, and Nehemiah; in Neh. 13:14, this phrase is reinforced by the explanatory clause “that I have done for (ʿāśâ + be) the house of God and its furnishings.”

In addition, however, the element of doing mišpāṭ comes very much to the fore in this group of occurrences. In Mic. 6:8, mišpaṭ and ḥeseḏ appear in parallel in the statement of what God requires of mankind. Hos. 12:7(6) says the same: “Hold fast to ḥeseḏ and mišpāṭ.” And on a throne established upon ḥeseḏ shall sit a judge who seeks mišpāṭ and ṣeḏeq (Isa. 16:5). We have what amounts to an interpretative elaboration of the concept mišpāṭ when the absence of ḥeseḏ and similar concepts spoken of in Hos. 4:1 leads in v. 2 to swearing, lying, killing, stealing, adultery, and murder. In like manner, the requirement of Zec. 7:9, “Render true judgments (mišpaṭ ʾemeṯ), show ḥeseḏ and raḥamîm each to his brother,” is interpreted in v. 10: “Do not oppress the widow, the fatherless, the sojourner, or the poor, and let none of you devise evil against his brother in your heart.” And according to Ps. 109, forgetting to show ḥeseḏ leads to persecution of the poor and needy (v. 16), together with love of cursing and dislike of blessing (v. 17). Those who act according to this divine requirement can therefore be called ʾanšê-ḥeseḏ (Isa. 57:1; Prov. 11:17 [sg.]); in Isa. 57:1 we find the ṣaddîq in parallel, and in Prov. 11:17 the “cruel man” (ʾaḵzārî) is cited in contrast. It follows from these principles that iniquity (ʿāwōn) can be atoned for through ḥeseḏ and ʾemeṯ.

The above is only a small sample of different examples of English translation targets for chesed.

In light of the above, we should see now how the major translations approach the use of shamar and chesed in this passage, with all translations using "keep" for shamar, but some translations emphasizing

The following are some examples of how this passage is translated:

And I said, “O LORD God of heaven, the great and awesome God who keeps covenant and steadfast love with those who love him and keep his commandments,

And said, I beseech thee, O LORD God of heaven, the great and terrible God, that keepeth covenant and mercy for them that love him and observe his commandments

I said, “O LORD God of heaven, the great and awesome God who keeps covenant and steadfast love with those who love him and keep his commandments;

I said, “O LORD, God of Heaven, great and awesome God, who stays faithful to His covenant with those who love Him and keep His commandments!

And I said, “O LORD God of heaven, the great and terrible God who keeps covenant and steadfast love with those who love him and keep his commandments;

And I say, ‘I beseech thee, O Jehovah, God of the heavens, God, the great and the fearful, keeping the covenant and kindness for those loving Him, and for those keeping His commands,

I said, “O Yahweh God of the heavens, the great and awesome one who keeps the covenant and loyal love for the ones who love him and for those who keep his commands.

The BDB lexicon and the Gesenius's grammar give no indication of NIV's translation (the waw in particular) being valid.

However the Jewish Publication Society's translation translates these words similarly.

I said, “O LORD, God of Heaven, great and awesome God, who stays faithful to His covenant with those who love Him and keep His commandments! (Neh. 1:5, JPS Tanakh)

I said, Yahweh, the God of heaven, the great and awe-inspiring God who keeps His gracious covenant with those who love Him and keep His commands, (Neh. 1:5, HCSV)

Of course the translation of חֶ֔סֶד varies, but these translations seem to ignore the וָ.

Senses in the Old Testament: 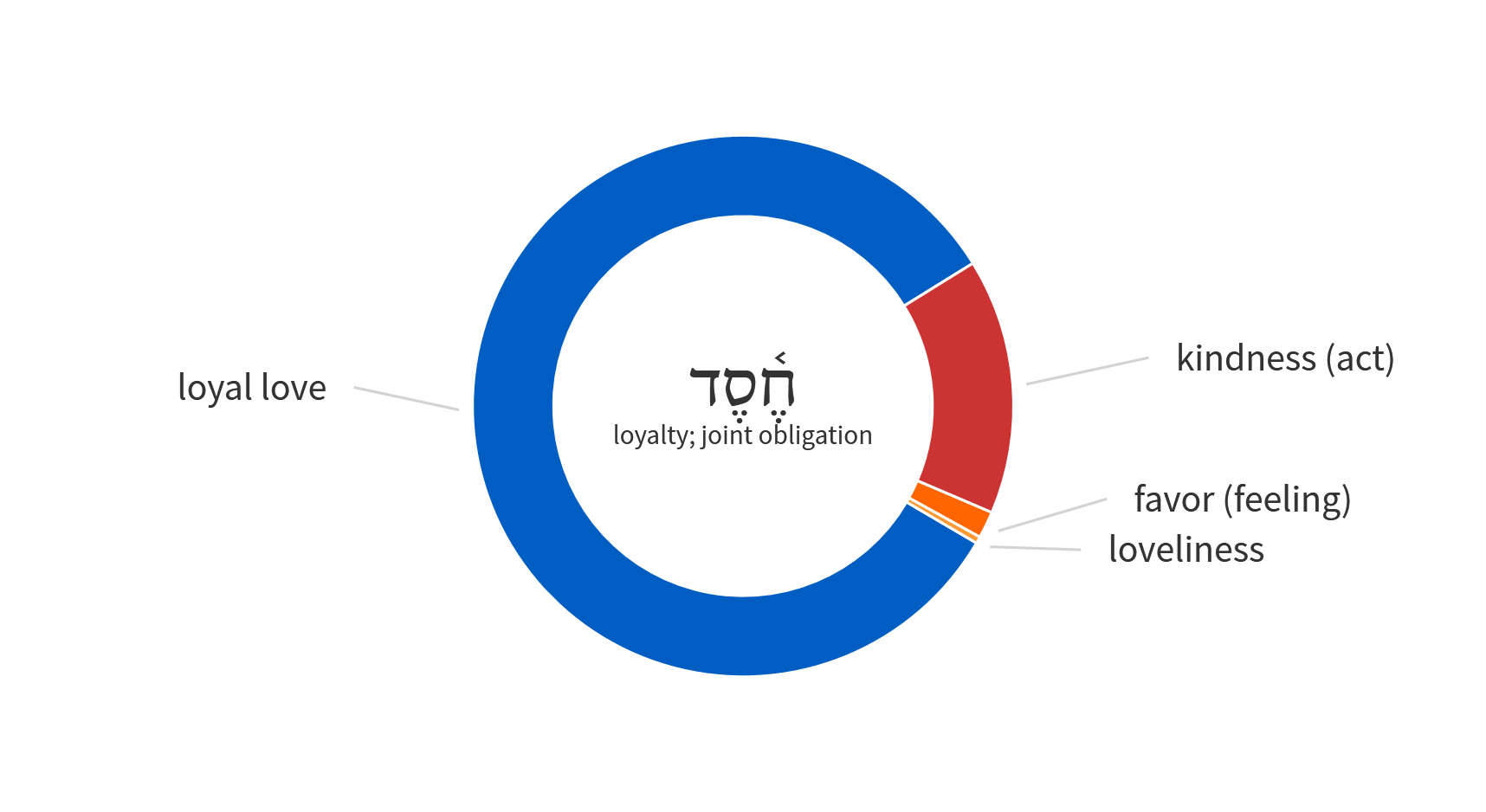 Not the answer you're looking for? Browse other questions tagged hebrew translation-philosophy hebrew-bible niv nehemiah or ask your own question.

7
Why does the KJV add "desire" to Mark 11:24?
2
Who are "they" in Nehemiah 8:8?
4
Is Leviticus 21:4 about a "chief", "husband" or a "close relative"?
4
What factors attest Nehemiah 7:68 is, or is not original to Nehemiah?
5
Why does Nehemiah require that the firstborn of the Israelites be redeemed in Nehemiah 10:36?
0
Does John 14:23 involve a "physical" house?
1
In Proverbs 3:3 and 16:6, are the NRSV/RSV/REB/CSB Bibles justified in their translation of "chesed" as "loyalty?"
2
Some Isaiah 61:8 translations use phrase "burnt offering" as opposed to "wrong"/"wrongdoing". Therefore, what does Hebrew WLC version say?
3
Why do English bibles change "Yearn for Purity" (נַשְּׁקוּ בַר) in Psalm 2:12 to "Kiss the Son" or "Kiss his Son"?
5
Why does Micah 6:8 Translate So Differently Mercy/Faithfulness/Kindness