How does Psalms 89:10 say Rahab was crushed?

It is said that Rahab had been crushed

You crushed Rahab like one of the slain; with your strong arm you scattered your enemies.

Awake, awake, arm of the Lord, clothe yourself with strength! Awake, as in days gone by, as in generations of old. Was it not you who cut Rahab to pieces, who pierced that monster through?

22 Joshua said to the two men who had spied out the land, “Go into the prostitute’s house and bring her out and all who belong to her, in accordance with your oath to her.” 23 So the young men who had done the spying went in and brought out Rahab, her father and mother, her brothers and sisters and all who belonged to her. They brought out her entire family and put them in a place outside the camp of Israel

So how was Rahab crushed?.

Awake, awake, put on strength, O arm of the LORD; awake, as in the ancient days, in the generations of old. Art thou not it that hath cut Rahab (H7294 - rahaḇ), and wounded the dragon? (Isaiah 51:9 KJV)

Thou hast broken Rahab in pieces (H7294 - rahaḇ), as one that is slain; thou hast scattered thine enemies with thy strong arm. (Psalm 89:10 KJV)

I will make mention of Rahab (H7294 - rahaḇ) and Babylon to them that know me: behold Philistia, and Tyre, with Ethiopia; this man was born there. (Psalm 87:4 KJV)

Rahab m.n. (Hebrew: רַהַב‎, strong's H7293 Modern: Rahav, Tiberian: Rahaḇ, "blusterer" one that is arrogant and prideful, referering to Egypt, Rahav so called either from the pride and haughtiness of its inhabitants; or from the large extent of the country; or from the form of it, being in the likeness of a pear, as some have thought 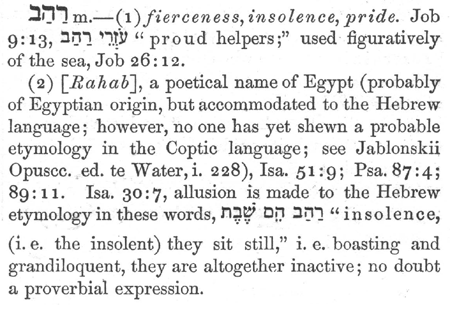 The first thing to observe is that the OP is confusing two different nouns - names for different things that in Hebrew are different words:

Thus, while similar in English, they are different words with different spellings in Hebrew and should not be confused with one another.

As has been pointed out, the Hebrew name for the prostitute in Jericho is spelled with a het, or aspirated "ch" which is a different letter than the sea monster which is spelled with a "he", or "h" sound. They are merely transliterated to the same letters in the latin alphabet, which does not have a "ch" sound.

Rahab the monster is one of the many sea monsters in the Old Testament. She was symbolically "cut" when the sea was parted in Exodus, and thus defeated in order to allow Israel to escape from Egypt. In this way, she is identified with Egypt. In Isaiah 51.9 we have the idea of "cutting" Rahab. In Psalm 89.10, the word "crushed" should be interpreted to mean "overcome", "overthrown", "defeated", etc.

Not the answer you're looking for? Browse other questions tagged psalms joshua or ask your own question.

15
Is the "captain of the Lord's host" an angel or God Himself?
3
In Hebrews 11 why is Rahab included in the "Hall of Faith" while the spies are not?
6
Was Rahab a temple prostitute?
1
Can you help me find out about the culture of Shittim where Rahab lived?
8
Why did the people of Jericho deserve such destruction?
7
How did the house of Rahab survive in Joshua 6?
0
in Joshua 5 how were they able celebrate Passover immediately after circumcision?
5
Whom did the congregation want to stone in Numbers 14:10?
2
overflows all its banks all the days of harvest