What age should we understand Samson, his bride and his bride's younger sister as being?

In Judges 14, Samson gets his parents to arrange a marriage with a certain Philistine maid. She is then given in marriage to one of Samson's companions. Then the wife's father offers the younger sister to Samson to wed.

What sort of ages would Samson and company have been/would the first readers have assumed Samson to have been? Wikipedia says 'young adult', but is not more specific of what that means.

Samson age is never mentioned in the bible but we have this;

30 And Samson said, Let me die with the Philistines. And he bowed himself with all his might; and the house fell upon the lords, and upon all the people that were therein. So the dead which he slew at his death were more than they which he slew in his life. 31 Then his brethren and all the house of his father came down, and took him, and brought him up, and buried him between Zorah and Eshtaol in the buryingplace of Manoah his father. And he judged Israel twenty years. (Judges 16:30-31 KJV)

A Biblical judge was a ruler, military leader, and someone who presided over legal hearings

So were all those that were numbered of the children of Israel, by the house of their fathers, from twenty years old and upward, all that were able to go forth to war in Israel; (Numbers 1:45 KJV)

So by this Samson become a judge at the age of 20 which is in chapter 14:4 when God start to use Samson as a judge to confront the Philistines and died at an age of 40 years old.

(His parents did not know that this was from the Lord, who was seeking an occasion to confront the Philistines; for at that time they were ruling over Israel.) (Jdg 14:4 NIV)

The Philistine woman in Timnah

In Judges chapter 15 vers 2 the word used by the father is קָטָן qāṭān and does not give a specific age. It means young, little, small.

And her father said, I verily thought that thou hadst utterly hated her; therefore I gave her to thy companion: is not her younger (H6996) sister fairer than she? take her, I pray thee, instead of her.

And we said unto my lord, We have a father, an old man, and a child of his old age, a little one; and his brother is dead, and he alone is left of his mother, and his father loveth him. (Gen 44:20 KJV)

Benjamin was born before Joseph was sold into slavery. Actually, he was birthed by Rachel when Jacob and his family were returning back home from Laban, his father-in-law (Gen 35:18) and Joseph was 17 when he was sold into slavery, and 39 when they came to him in Egypt. So if Benjamin was 1 year old then he was 23 years when his brothers referred to him as קָטָן qāṭān 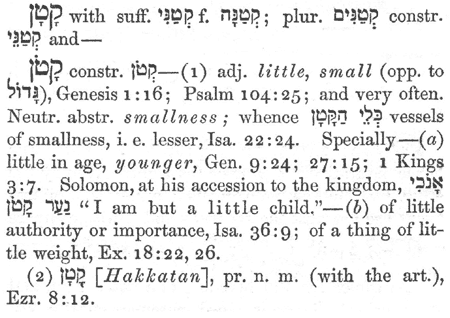 Samson was just entering his manhood when he asked his parents to arrange the marriage. In the culture of that time, one became a man (adult) at the age of 20. Therefore, we can safely conclude that Samson would have been at least 20 years old, but not much more. It is likely that the bride would have been about that same age or slightly younger, but we are not told.

Our best indication of Samson's age is found in Judges 14:10, in which the Hebrew word "הַבַּחוּרִֽים" (hab·ba·ḥū·rîm), translated as "young men," sees parallel usage in Isaiah 62:5, which speaks of young men marrying virgins, and in 1 Samuel 9:2 to address the selection of Saul as a young man to be Israel's first king.

So his father went down unto the woman: and Samson made there a feast; for so used the young men to do. (Judges 14:10)

Not the answer you're looking for? Browse other questions tagged judges marriage or ask your own question.

10
In Genesis 2:24 does "leave his father and mother" mean that men should not live in extended families?
5
What is the meaning of "his own vessel" and "defraud his brother" in 1 Thess 4:3-8?
1
What is being said about Samson and his hair in Judges 16:22?
5
Why did God bless Abraham's marriage with Sarah if she was his sister and incestuous relationships are categorically prohibited in Scripture?