Did translators of bible bowdlerized the word methiosin in Cana wedding story?

The word methiosin in Koine Greek means being drunk.

Most translate that as something that may refer to being drunk but not necessarily so.

Actually, English is not my first language. I am not even sure what those words mean.

An answer in this question says that those words mean drunk. They are just euphemisms. Really?

I know in Indonesia they translate this as "puas minum", which means something like "satisfied drinking". I know those phrases don't mean the person is inebriated.

Is this a sample of bowdlerization of the bible? If so, is there a complete list?

Any answer, whether agree or disagree is fine, as long as it's well sourced.

The translators are not likely to have made an attempt to water down the meaning here so much as to merely translate the grammar correctly.

The Greek word used in John 2:10 is in the Greek aorist subjunctive passive form. When we say in English "he is drunk", we are using the word "drunk" as an adjective, not as a verb, and it is clearly synonymous with being intoxicated. But that is not the form of the grammar used here, and the translators would not have been translating correctly to convert the Greek verb to an English adjective.

As it is, because of the difficulty of translating the Greek word, it has resulted in a longer expression in English. Verbs in Greek, like in Latin languages, can include the pronominal subject (pronoun), the action itself, the time of the action, the tense/mood of the action, and even the object of the verb--all in one word.

Can be broken down into the following grammar:

Subjunctive is also difficult. English does not have a subjunctive verb form, and uses past tense verbs to express subjunctive meanings. A common example is "if I were you, I would...." The "were" is the English subjunctive verb. In this case, we use subjunctive because this is the unreal condition--I am not you and could never be you.

The Greek verb, however, does not mean "intoxicated" (an adjective), because it addresses an action. In order to become intoxicated with wine, one must first drink it. The action is the drinking. And English uses "drink" as a common euphemism for imbibing alcoholic beverages.

If I say "he drinks every day after work," an English speaker would assume, in the absence of any context to the contrary, that he is drinking alcohol, not water or milk or tea or juice or anything else. In other words, when "drink" is used as an intransitive verb in English, alcohol is generally assumed. To specify something other than alcohol, the object must be provided (transitive verb); e.g. "he drinks water every day after work."

So the translators are actually doing their best at properly translating both the meaning and the grammar of this passage in John 2:10, and any misunderstanding of it may be the part of the reader. Because the context of the drinking is clearly referring to wine at the wedding, there is little excuse for thinking of anything other than inebriation.

This is the reason it is always helpful to study the original languages or to use dictionaries and lexicons to help understand the meanings of the words and expressions used. 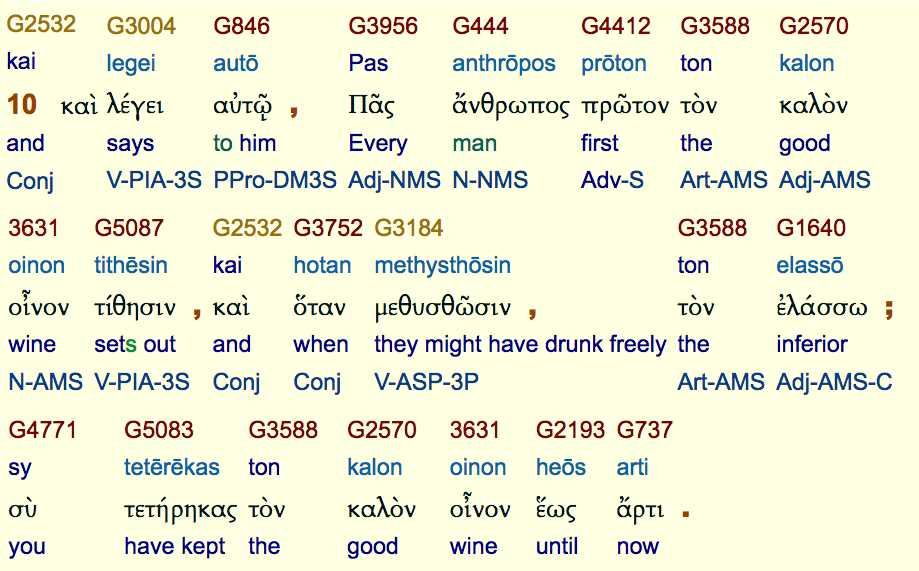 It is only drunkenness that God's people are to avoid - Luke 21:34; Romans 13:13; 1 Corinthians 5:11. Indeed, the apostle Paul exhorted young Timothy, "Drink no longer water, but use a little wine for thy stomach's sake and thine often infirmities." (1 Timothy 5:23).

Now to the text you ask about, when Jesus miraculously changed plain water into the best of wine - and a very large quantity of it, at that (six stone water-jars). John 1:20 uses the Greek 'methysthosin' which, in context, translates into English as 'they might become drunk'. So, a good reading of the verse in question could be, "Every man puts the best wine out first, and when people are intoxicated, the inferior. You have reserved the best wine until now." Another good translation puts it, "Every man at the beginning doth set forth good wine; and when men have well drunk, then that which is worse; but thou hast kept the good wine until now." (The Companion Bible, Bagster) The note for 'well drunk' reads, "= drunk freely."

That was what the director of the wedding feast said to the bridegroom upon tasting Jesus' wine. Those wedding feasts went on for many days, you see. We are not speaking of a one-day Western-style wedding, where many guests rush to the bar after the ceremony, to get down as much alcohol as they can in as short a period of time as they can. No, this was a prolonged celebration over many days, so the custom was to put out the best wine at the start, then, a day or two later, those who had drunk a lot of alcohol would not even notice that the wine was now of poor quality.

Yet it holds good that only those who had drunk to the point of inebriation would have drunk freely so as to be incapable of discerning good wine from cheap wine. The text is not saying that everybody was already drunk! Clearly, the director (or governor) of the feast was not drunk. He instantly discerned that this wine was the best of wine. Some guests would be drunk, but not necessarily all of them. That is why it is correct to translate 'methysthosin' as 'they might become drunk'.

But I'm always perplexed as to why debates about this miracle of Jesus' center on whether Jesus produced alcoholic, or non-alcoholic wine. That is to miss the point entirely. Is nobody bothered to consider why this first miracle at the start of his ministry involved wine, and to relate that to how the end of his ministry was also marked by wine - the Passover cups during the meal, and the cup of wine at the end which marks the new covenant?

and said, “Everyone brings out the choice wine first and then the cheaper wine after the guests have had too much to drink [G3184]; but you have saved the best till now.”

There is another related Greek word that is unambiguous used in Luke 21:34

“Be careful, or your hearts will be weighed down with carousing, drunkenness [G3178] and the anxieties of life, and that day will close on you suddenly like a trap.

Not the answer you're looking for? Browse other questions tagged greek john or ask your own question.

1
John 2:9 & 10 Does Jesus condone drunkenness at the Cana wedding?

5
In 1 Peter 1:4, why did the translators of the KJV translate εἰς ἡμᾶς as "for you"?
1
Why do the NASB translators of 1 Cor. 14:1 add the word "earnestly" before "desire spiritual gifts"?
4
Why is the word "honeycomb", in Luke 24:42, missing from most Bible translations?
3
Why do the NLT translators say "demons" (Rom 8:38)?
2
Did Jesus create wine that the wedding guests got drunk on afterward?
2
Could the six jars of wine at the Wedding at Cana symbolize the six followers of Jesus at the wedding?
1
John 2:9 & 10 Does Jesus condone drunkenness at the Cana wedding?