What is the difference between the account of the crucifixion, death and burial of Christ in the book of Mathew, Mark, Luke and John [closed]

Ask Question
Asked 13 days ago
Active 10 days ago
Viewed 58 times
2
Closed. This question is off-topic. It is not currently accepting answers.

Want to improve this question? Update the question so it's on-topic for Biblical Hermeneutics Stack Exchange.

What is the difference between the account of the crucifixion, death and burial of Christ in the book of Mathew, Mark, Luke and John

Answer: The following information can be found here as a downloadable PDF by B.N. Fisk. It seems relatively comprehensive: 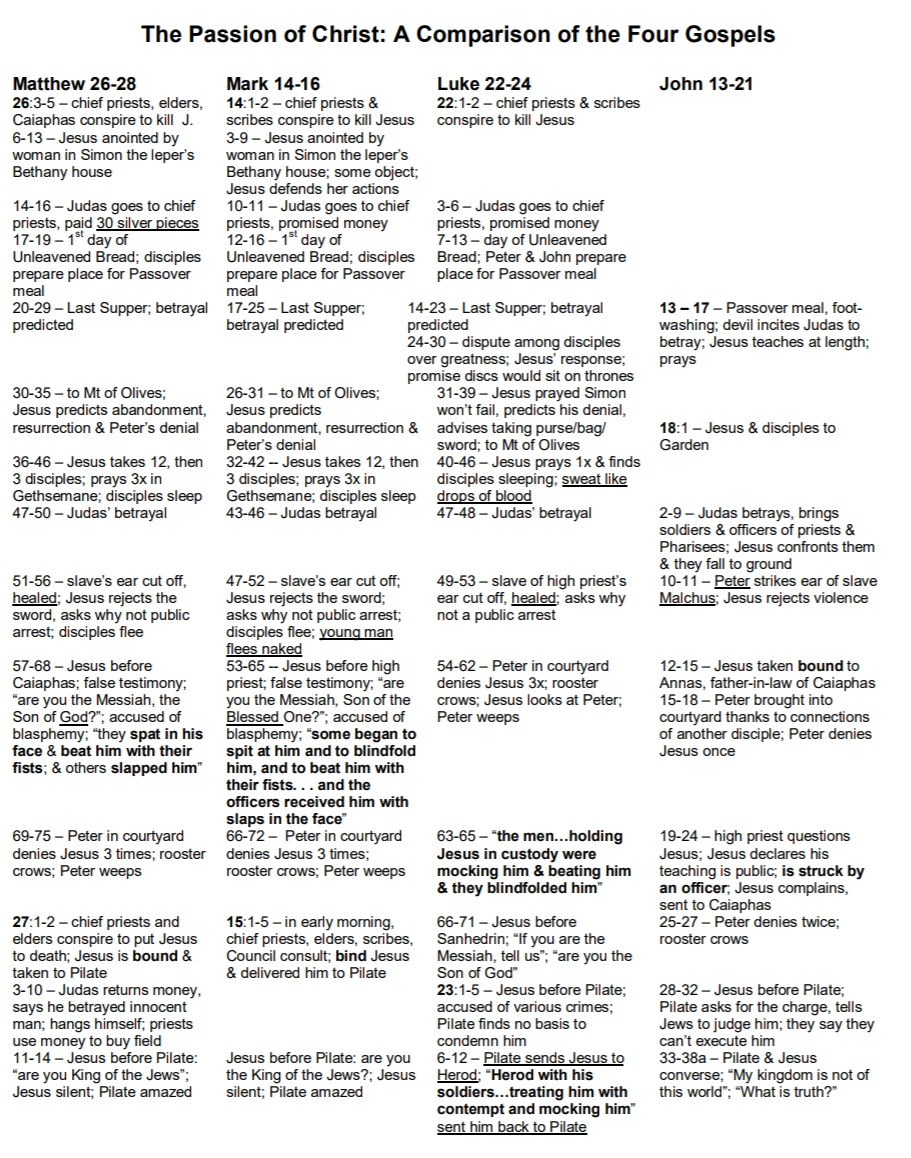 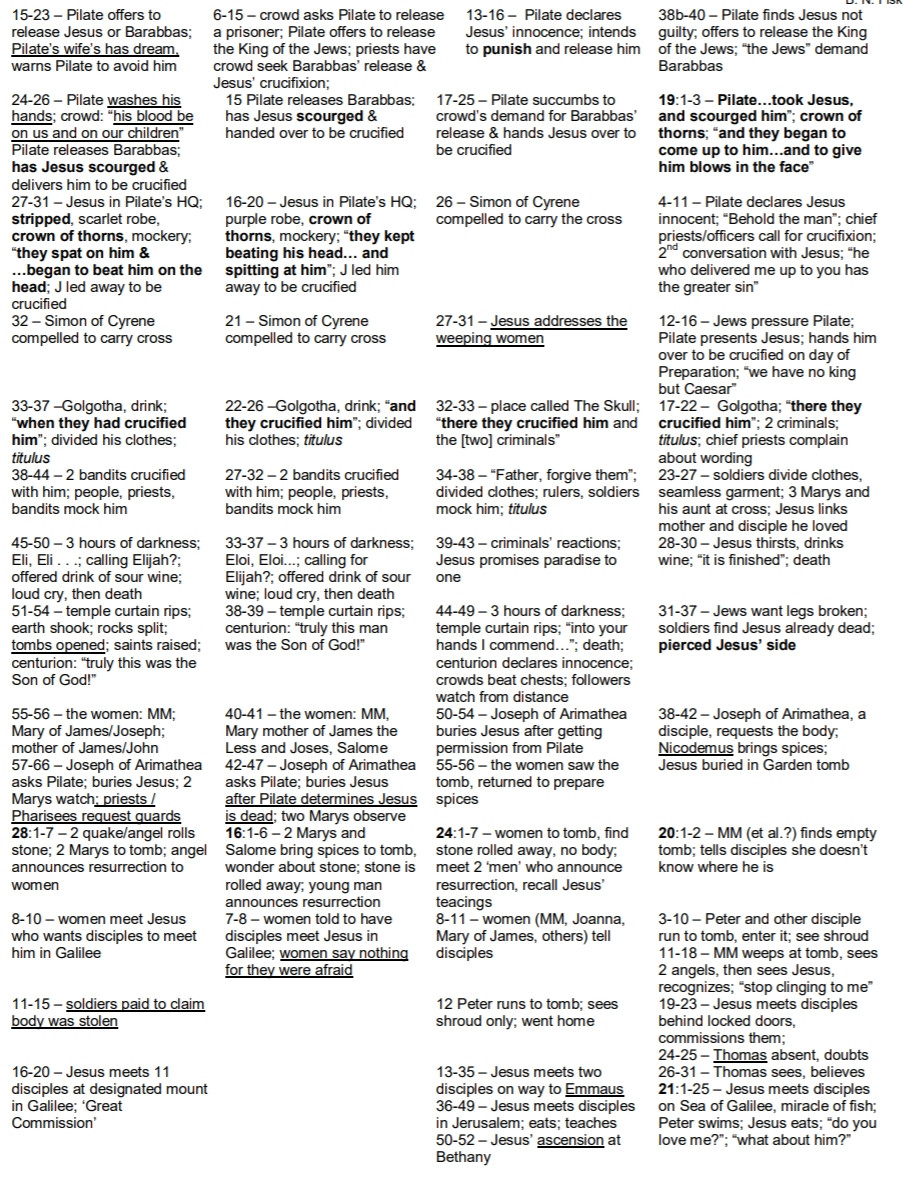 At these links is the answer to you question with great detail.

Jim Osman's conclusion to part one

So it is with the gospels. We have four independent, eyewitness accounts of the same event. These accounts provide complementary, but not contradictory, information.

There are no contradictions between the gospel accounts of the resurrection. There are differences, even very intriguing differences, but there are no necessary contradictions. There are statements that may appear contradictory, but when we examine them, accounting for the perspective of the author, we find that there are ways of understanding the events that do not require us to conclude that one or any of the gospel writers had it wrong.

When we put these accounts together we get a complete picture not a contradictory picture.

In part two, I will reconstruct the events of that first Easter morning in a way that accounts for all the details. We will see that a harmonization of these accounts is anything but impossible.

There are considerable differences around the crucifixion, too many to mention. I have mentioned d some clear and obvious / well know points. To examine this topic fully would be too wide, but the internet has so much from all different points of view.
One must also decide are the gospels God inspired or merely men, arguably unknown men who have written accounts and how should we see the contradictions.

BUILD UP TO THE CRUCIFIXION

Are there any witnesses

Then you have a clear statement from; Mark 14:50 50 And they all forsook him, and fled. – how can there be witnesses if they ‘fled’

Enoch Pawl book ‘Development of the Gospels’ says that the crucifixion was not mentioned in the original Gospels. He retranslated the Greek copy of Mathew’s Gospel; and he found that some passages were repeated in the Gospel, which means it was re-written later.

Only Luke mentions the below Luke 23:33-34 (RSV) 34 And Jesus said, “Father, forgive them; for they know not what they do.”[a] And they cast lots to divide his garments.

Noticing the destruction that happened to Jerusalem twice, in year 70 C.E and 135 C.E, it was certain that God did not forgive them”.

Did the Chief priest come to arrest Jesus

Matthew said, "And a large mob armed with swords and clubs was with him. They had been sent by the chief priests and the nation's leaders." (Matthew 26:47)

"And straightway, while he yet spake, cometh Judas, one of the twelve, and with him a multitude with swords and staves, from the chief priests and the scribes and the elders. (Mark 14:43)

"So he went to the garden with some Roman soldiers and temple police, who had been sent by the chief priests and the Pharisees." (John 18:3)

"Jesus spoke to the chief priests, the temple police, and the leaders who had come to arrest him." (Luke 22/52)

"At daybreak the nation's leaders, the chief priests, and the teachers of the Law of Moses got together and brought Jesus before their council. They said, "Tell us! Are you the Messiah?" (Luke 22/66-67).

The other 3 say the prosecution was at night.

How many times did the cock crow

different to Luke and the others

When did the maid recognize Peter for the first time

"Then saith the damsel that kept the door unto Peter, Art not thou also one of this man's disciples?" (John 18:17) –

"And when he was gone out into the porch, another maid saw him, and said unto them that were there, This man also was with Jesus of Nazareth." Matthew 26:71

Who carried the cross, Jesus or Simon

The story of Judah’s death

other two crucified men about Jesus

"And the robbers also that were crucified with him cast upon him the same reproach." Matthew 27:44, same in Mark 15:32

"And one of the malefactors that were hanged railed on him, saying, Art not thou the Christ? Save thyself and us. But the other answered, and rebuking him said, Dost thou not even fear God…And he said unto him, Verily I say unto thee, Today shalt thou be with me in Paradise."

"When Jesus therefore had received the vinegar, he said, It is finished: and he bowed his head, and gave up his spirit." John 19:30.

Veil of the temple rent

"And Jesus uttered a loud voice, and gave up his spirit. And the veil of the temple was rent in two from the top to the bottom." Mark 15:37-38 (after his spirit)

And it was now about the sixth hour, and a darkness came over the whole land until the ninth hour, the sun's light failing: and the veil of the temple was rent in the midst. And Jesus, crying with a loud voice, said, Father, into thy hands I commend my spirit: and having said this, he gave up his spirit." Luke 23:44-46 (before his spirit)

when and who came to the Tomb some has already been mentioned, add the following:

Matthew 28:1-4 After the Sabbath, at dawn on the first day of the week, Mary Magdalene and the other Mary went to look at the tomb. 2 There was a violent earthquake, for an angel of the Lord came down from heaven and, going to the tomb, rolled back the stone and sat on it. 3 His appearance was like lightning, and his clothes were white as snow. 4 The guards were so afraid of him that they shook and became like dead men. 9 Suddenly Jesus met them. “Greetings,” he said. They came to him, clasped his feet and worshiped him.

John 20:1-2 20 Early on the first day of the week, while it was still dark, Mary Magdalene went to the tomb and saw that the stone had been removed from the entrance. 2 So she came running to Simon Peter and the other disciple, the one Jesus loved, and said, “They have taken the Lord out of the tomb, and we don’t know where they have put him!”

On the basis that Jesus became a spirit or is the Holy Spirit why did an Angel need to move the Tomb stone based on below;

John 20: 19-20 & 26-27 19 Then, the same day at evening, being the first day of the week, when the doors were shut where the disciples were assembled, for fear of the Jews, Jesus came and stood in the midst, and said to them, “Peace be with you.” 20 When He had said this, He showed them His hands and His side. Then the disciples were glad when they saw the Lord.

26 A week later his disciples were in the house again, and Thomas was with them. Though the doors were locked, Jesus came and stood among them and said, “Peace be with you!” 27 Then he said to Thomas, “Put your finger here; see my hands. Reach out your hand and put it into my side. Stop doubting and believe.”

Mark - visitors saw a young man sitting at the right side of the tomb, wearing a white garment. Mark 5:16 Matthew - an angel descended from heaven Matthew 28:2 Luke - two men in bright clothes Luke 24:4 John - two angels in white clothes. One sat near the head, and the other near the legs John 20:12

Magdalene told by Jesus or the Angel

Matthew 28:5-10 – the angel told her about Jesus and where he was laying

Did the women hide the news, or did they reveal it

"And they said nothing to any one; for they were afraid." Mark 16:8

"And returned from the tomb, and told all these things to the eleven, and to all the rest." Luke 24:9

To whom did Jesus appear the first time

How many times did Jesus appear and where

It was just before the Passover Festival. Jesus knew that the hour had come for him to leave this world and go to the Father. Having loved his own who were in the world, he loved them to the end. The evening meal was in progress... [John 13:1-2]

Now it was the day of Preparation of the Passover. It was about the sixth hour. He said to the Jews, “Behold your King!” They cried out, “Away with him, away with him, crucify him!” Pilate said to them, “Shall I crucify your King?” The chief priests answered, “We have no king but Caesar.” [John 19:14-15]

How long did Jesus stay on earth before his ascending

“Who in the days of his flesh, having offered up prayers and supplications with strong crying and tears unto him that was able to save him from death,and having been heard for his godly fear." (Hebrews 5:7),

Psalm 20:6 6Now I know that the LORD saves His anointed; He answers him from His holy heaven with the saving power of His right hand.

"When evil-doers came upon me to eat up my flesh, Even mine adversaries and my foes, they stumbled and fell… For in the day of trouble he will keep me secretly in his pavilion: In the covert of his tabernacle will he hide me." (Psalms 27:2-5)

Psalm 21:2 - You have given him his heart’s desire, And have not withheld the request of his lips. Selah

Psalms 34:20 He protects all his bones; not one of them will be broken

PSALM 91:10-15 10 no harm will overtake you, no disaster will come near your tent.11 For he will command his angels concerning you to guard you in all your ways; 12 they will lift you up in their hands, so that you will not strike your foot against a stone. 13 You will tread on the lion and the cobra; you will trample the great lion and the serpent. 14 “Because he loves me,” says the LORD, “I will rescue him; I will protect him, for he acknowledges my name. 15 He will call on me, and I will answer him; I will be with him in trouble, I will deliver him and honor him.

Jonah (prayed and was alive) - 7 When my life was fainting away, I remembered the Lord, and my prayer came to you, into your holy temple.

Deuteronomy 21:22-23 22 If someone guilty of a capital offense is put to death and their body is exposed on a pole, 23 you must not leave the body hanging on the pole overnight. Be sure to bury it that same day, because anyone who is hung on a pole is under God’s curse. You must not desecrate the land the Lord your God is giving you as an inheritance.