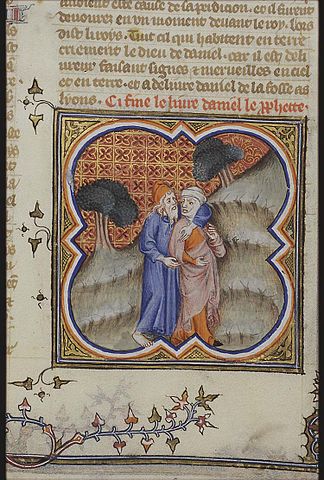 This is what we read in Hosea (8th-century BC prophet in Israel):

4 For the Israelites must live many days without a king or prince, without sacrifice or sacred fertility pillar, without ephod or idols. 5 Afterward, the Israelites will turn and seek the Lord their God and their Davidic king. Then they will submit to the Lord in fear and receive his blessings in the future. (Hosea 3:4-5 NET)

“These carnal Israelites, who today refuse to believe in Jesus Christ, will one day believe in Him, that is, their descendants will do so, for Hosea foretells their conversion in the following terms: 'The children of Israel shall sit many days without king, and without prince, and without sacrifice, and without altar, and without ephod1 and without teraphim2.' Who is there who does not see in this a portrait of the present state of the Jewish people? But listen to what the prophet adds : 'And after this the children of Israel shall return, and shall seek the Lord their God, and David their king: and they shall fear the Lord, and His goodness in the last days.' Nothing can be clearer than this prophecy, in which David evidently stands for Jesus Christ. Christ, says the Apostle, is born of the line of David according to the flesh.” (Father Augustine Lemann, Histoire Complète de l'Idée Messianique chez le peuple d'Israël, 1909 - pp. 443-445 [translation from the French by MdS])

Hosea certainly deals with the idolatry of his day, of which the repeated prostitution of Gomer, his wife, is a figure. But it is also a prophecy of Israel's future repentance, achieved only after the prolonged loss of independence, and only after they have renounced for good all forms of idolatry. But the expressions "without sacrifice", "without ephod" have no apparent connection with the repudiation of idolatry, and may suggest that the time framework is very ample, and includes the end of the priestly sacrifice, which definitively ended only in 70 CE.

When the Babylonian captivity finished with the fall of Babylon to the Persian king Cyrus the Great in 539 BCE, and the exiled Jews began to return to the land of Judah, they had already abandoned all idolatrous practices, and never resumed them. It was from that time that their Messianic expectations started growing.

In Romans 9-11, Paul speaks extensively of the rejection by God of the Jewish people, which have not recognized the Messiah, Jesus Christ. At Rom 9:25-26 he quotes Hosea 2:23 and Hosea 1:10, apparently interpreting Hosea's prophecy ("Although it was said to them, “You are not my people,” it will be said to them, “You are children of the living God!”), with reference to God's new people, "not only from the Jews but also from the Gentiles" (Rom 9:24).

For a list of definitions please see who is Israel? In light of those definitions will my response make sense.

This story is the story of the prodigal son. The eldest son is Judah or the southern kingdom and the youngest son is Efraim or the ten tribes of the Northern kingdom.

When Hosea speaks of

And makes the distinction between Judah and Israel its because they are now separated as both the sons of the prodigal story are two individuals.

The youngest son left but was received again (under a new and better covenant because the old covenant was made obsolete, see book of Hebrews NT). In doing so the oldest son had to enter under the new covenant too. It’s no longer by bloodlines

Therefore those in the new covenant don’t replace Judah and Israel, NO, they ARE Israel

“remember that you were at that time separated from Christ, alienated from the commonwealth of Israel and strangers to the covenants of promise, having no hope and without God in the world.” ‭‭Ephesians‬ ‭2:12‬ ‭

“James, a servant of God and of the Lord Jesus Christ, To the twelve tribes in the Dispersion: Greetings.” ‭‭James‬ ‭1:1‬ ‭

The OT was in conflict, how could God remarry Efraim (ten northern tribes) when He divorced them. The NT church had the exact same problem, they refused to mingle with the Gentiles IN CASE there were bloodlines of the divorced tribes.

Paul comes in Romans 9 and shows that once the first husband (which had to be Jesus) died, the old covenant frees the divorced tribes from the marriage covenant of the OT and allows former Efraim (ten divorced tribes) mixed with Gentiles to join the Commonwealth of Israel again.

Which fulfills the Scriptures

“Arise, O God, judge the earth; for you shall inherit all the nations!” ‭‭Psalm‬ ‭82:8‬ ‭

Efraim was the net that was cast out among the nations, they intermarried, crossed bloodlines and now under an non bloodline covenant they are bringing in not just the former ten divorced tribes but the Gentiles with them.

The big issue is that Judah the eldest brother was stubborn refusing to come under the new covenant even though the old covenant is now obsolete.

God by taking a loss, actually managed to bring back to Himself the nations He lost at the Tower of Babel.

22What if God, although choosing to show his wrath and make his power known, bore with great patience the objects of his wrath—prepared for destruction? 23What if he did this to make the riches of his glory known to the objects of his mercy, whom he prepared in advance for glory— 24 even us, whom he also called, not only from the Jews but also from the Gentiles? 25As he says in Hosea:

Hosea, Paul and the final conversion of Israel

The Answer is more nuanced, and there are several approaches.

Some propose a "spiritualizing" approach, whereby Paul has reinterpreted the passage from Hosea, attributing it to the "new people" of God, formed by Jews and Gentiles. (see, for instance, George, Eldon Ladd, in The Meaning of the Millennium: Four Views, p. 24).

Some affirm that Paul is applying the prophecy to Israel, according to the obvious sense of the text. (See, for instance, John A. Battle, "Paul's Use of the Old Testament in Romans, 9:25-26" in Grace Theological Journal, Vol. 2 No 1, Spring 1981, pp. 115-129: "this approach has the distinct asset of taking Hosea’s prophecy at face value and maintaining complete harmony between Hosea and Paul" p. 122)

A third approach is to consider the conversion to the Messiahship of Jesus Christ (that has happened to a minority of Jews and mostly to Gentiles) as a prophecy of the full restoration of Israel. For instance Scott J. Hafemann says, "Just as God can bring Israel back from the dead, he can also call Gentiles to new life."

What Paul does here is to take this promise, which referred to a situation within the frontiers of the chosen people, and extract from it a principle of divine action which in his day was reproducing itself on a world-wide scale. In large measure through Paul’s own apostolic ministry, great numbers of Gentiles, who had never been “the people of God” and had no claim on his covenant mercy, were coming to be enrolled among his people and to be recipients of his mercy. (F.F. Bruce, TNTC Romans, 2015, IVP ebook, p. 185)

This approach finds its corroboration in what Paul says in Romans 11, where he speaks of the "mystery" of the "partial hardening [that] has happened to Israel until the full number of the Gentiles has come in" (Rom 11:25). But in the end, also Israel will be fully converted: "For God has consigned all people to disobedience so that he may show mercy to them all." (Rom 11:32)